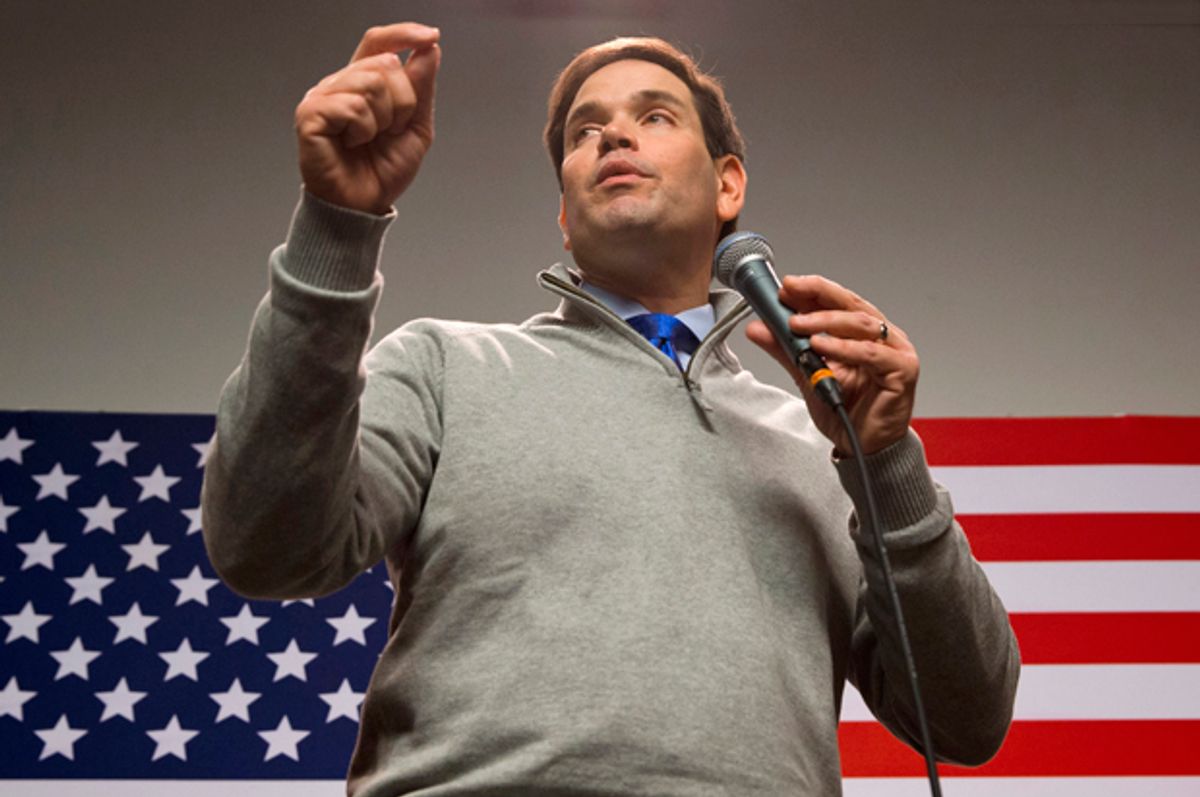 If you’re one of the many Democrats excited about the possibility of a contested Republican convention, there is good news to report. In a highly unusual move, Marco Rubio is lobbying to keep every single delegate he won before dropping out of the race earlier this month.

Typically, a candidate’s delegates are free to support someone else once he or she bows out. But MSNBC is reporting that Rubio “is personally asking state parties in 21 states and territories to refrain from releasing any of the 172 delegates he won while campaigning this year.”

In a letter addressed to Peter Goldberg, the chairman of the Alaska Republican Party, Rubio made his request explicit:

“I write this letter to inform you that the decision to suspend my campaign for President of the United States is not intended to release any National Convention Delegates bound to me as a result of the 2016 delegate selection process that took place in your State. It is my desire at this time that the delegates allocated to me by your rules remain bound to vote for me on at least the first nominating ballot at the National Convention.”

This exact letter has been sent to all 21 states in which Rubio won delegates. Goldberg has granted Rubio’s request after conferring with RNC officials, including Reince Priebus, who currently heads the Republican National Committee. At the urging of Priebus, Goldberg told MSNBC that “Most states are leaning towards giving [Rubio] his delegates.”

There is really one reason for Rubio to do this: Donald Trump.

Indeed, Rubio’s aide Alex Burgos has told MSNBC “that while the Florida senator is ‘no longer a candidate,’ he ‘wants to give voters a chance to stop Trump.’” By voters, of course, Burgos means party elites. The voters are expressing their will in the clearest possible terms right now. That’s what elections are for, after all. Democracy is a pesky instrument, though – often it doesn’t turn out the way the power structure prefers.

Trump has exploded the Republican Party, fracturing the base with his ideological heterodoxy and anti-establishment bluster. Whether Rubio or Priebus like it or not is irrelevant: Trump is the overwhelming favorite to win the nomination. The election results speak for themselves. And if Trump falls short of the magic 1,237 delegates needed to secure the nomination, he will still have more delegates and far more votes than any other candidate – that’s a big problem.

Now that Trump is tiptoeing away from his pledge to support the party’s nominee in November, establishmentarians are doubling down in their efforts to undermine him at the convention.

Along with Rubio’s bid, Politico is reporting that “All four early appointees of the rules committee for this year’s Republican convention” are “prepared to weaken or scrap a rule that could limit the convention’s alternatives to Donald Trump.” Imposed by Mitt Romney’s campaign in 2012, the rule in question requires “a candidate to win a majority of delegates in eight states to be eligible for the party’s nomination.”

This is important because it opens the door to candidates not currently running for president, like Romney or Paul Ryan. Oddly enough, handing the nomination to someone who didn’t participate in the primaries may be the least cataclysmic option for Republicans. To allow Ted Cruz or John Kasich to win at this point would be untenable, given the disparity in votes. Trump is cartoonishly unfit for office and he'll almost certainly lose a general election, but he's winning fair and square — all the disbelief in the world won't change that.

A brokered convention will be a disaster for the Republican Party. However it’s handled, denying Trump the nomination he earned will alienate his supporters, without whom the GOP has no chance in November. But that will surely be part of the RNC’s decision calculus. They may have to forfeit this election in order to avoid the long-term damage a Trump nomination would do to the party’s brand.

In any case, this is great news for Democrats.