Kasich finally lands a semi-good jab on Trump: "Donald ought to be happy that Jon Stewart’s not running 'The Daily Show'" 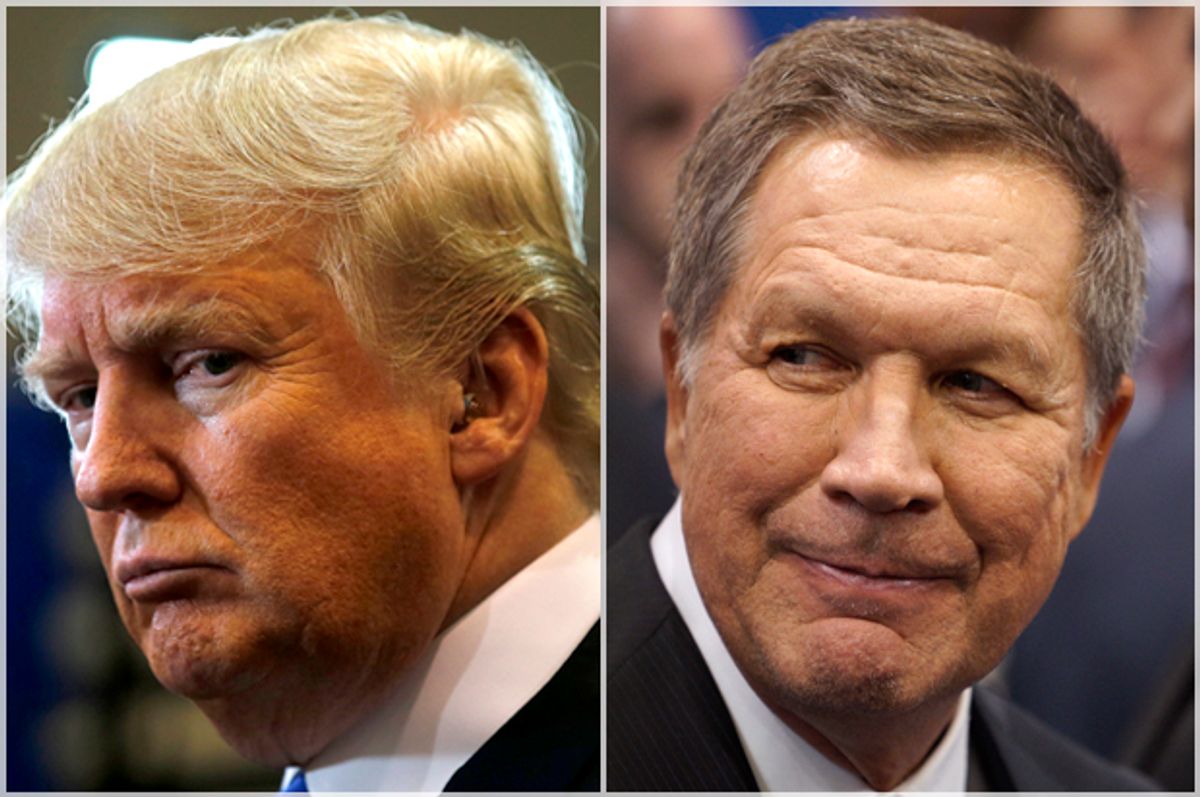 John Kasich, surprisingly, is still around.

The Ohio governor outlasted 14 other presidential hopefuls to remain one of Donald Trump's last two rivals in the Republican primary. But in reality, Kasich doesn't pose any threat to Trump ahead of July's convention in Cleveland and even then, according to his past performance and current polling, there is little reason to believe that Kasich could ever serve as Republican's unifying anti-Trump pick should Trump fail to secure the nomination before the convention. Republicans simply aren't buying what Kasich's selling. Perhaps it's because he's dissed the longstanding Republican pledge to repeal and replace Obamacare as a "stupid promise" and "big joke."

"How are you gonna repeal Obamacare when Obama's president?" the Republican presidential candidate has grown fond of asking his fellow Republicans.

So while his mission may be futile, it's no less noble when he sets forth to sprinkle a bit of truth-dust all over the Party's de-facto leader and full-time lie machine.

“The past 24 hours revealed in the clearest way yet that Donald Trump is not prepared to be President," Kasich said on Thursday morning, as Americans were still learning of Trump's declaration that an abortion ban should come with punishment for the woman, and digesting the information that Trump's top consideration in selecting a Supreme Court justice is a willingness to prosecute Hillary Clinton for using a personal email server while secretary of state, and absorbing his attack on the Geneva Conventions.

"I mean, it’s like a panoply of mistakes and outrageous statements," a stupefied Kasich reminded. "Things that are coming out of Donald’s mouth that are just, they’re just basically irresponsible.”

“People say, ‘Why does he stay in the race?’" Kasich said of those who question why he is still running for president. "What, am I supposed to get out and leave it to these guys?”

"People around the world must be having a field day, and you know what Donald ought to be happy about is that Jon Stewart’s not running 'The Daily Show,'" he said, delivering as close to a zinger as the publicly mild-mannered midwesterner has delivered on the campaign trail all year: