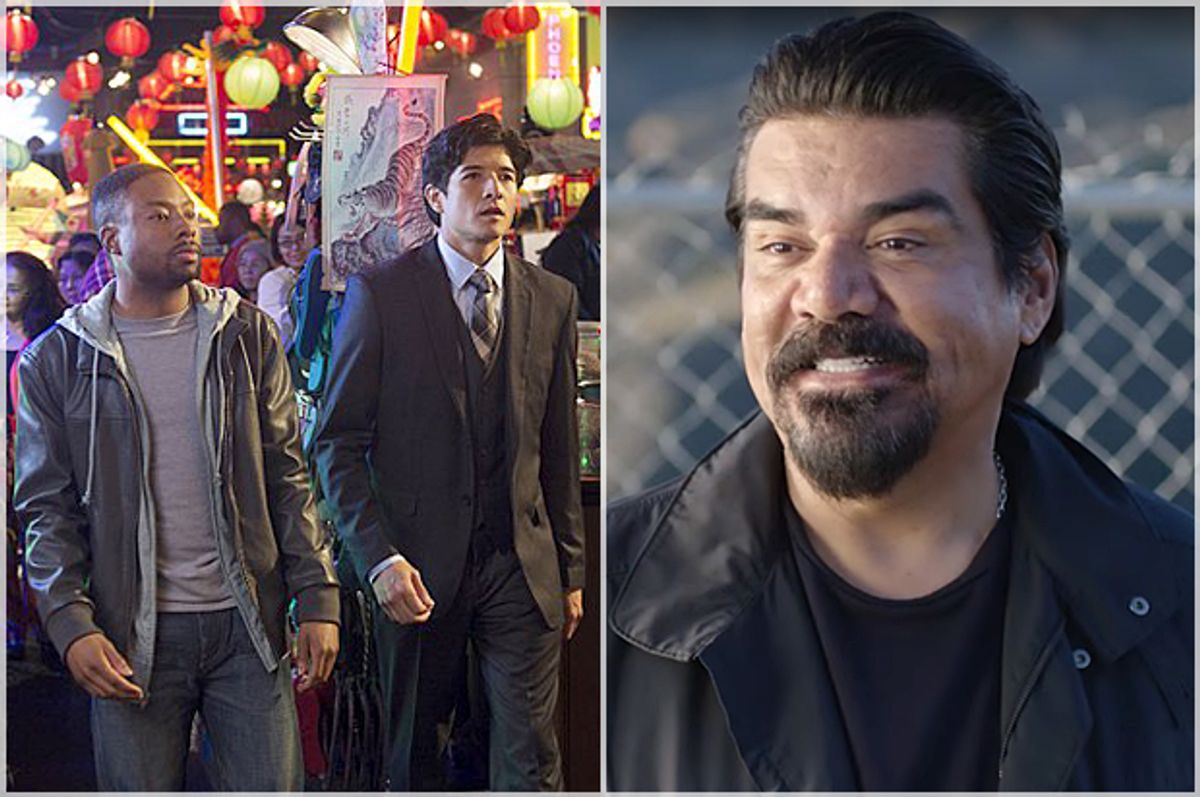 It does not seem obvious that the 1998 film “Rush Hour” would be adapted into a 2016 television procedural on CBS. “Rush Hour,” the film, is a profane buddy comedy starring Chris Tucker and Jackie Chan as an unlikely pair of law enforcers brought together by an abduction that crosses international lines. Tucker brought an element of Eddie Murphy’s “Beverly Hills Cop” to his performance as Carter, performing—perhaps over-performing—the role of a wisecracking, street-smart black man in Los Angeles. Chan, meanwhile, served up his usual action-hero charm as Lee, the Chinese agent flown in from the other side of the world—stumbling through his English in a way he would never stumble through a fight scene.

In the original film, both characters are playing up their own ethnic identities to contrast them against the other, for whatever laughs they can muster; at times, this highlights the enormous bridge between the stereotypes for both races, and at times, it plays uncomfortably into the existing norms. To this easily amused viewer who is neither black nor Chinese, “Rush Hour” is a very funny, a surprisingly cosmopolitan buddy comedy about globalization (?!) filled with banter about, for no reason at all, Edwin Starr’s “War.” It stars two leads of color and a Latina sidekick, a bunch of its dialogue is Chinese, and the main bad guy is basically the embodiment of The Man—a tall white guy in a suit played with dry sincerity by the extremely overqualified Tom Wilkinson. For every instance that Carter calls Lee “Mr. Rice-A-Roni” or refers to his “sweet and sour chicken ass,” there’s also a strange moment of clarity. “This is the LAPD,” he says at one point. “We're the most hated cops in all the free world. My own mama's ashamed of me.”

“Rush Hour” became a franchise that took the cops to Hong Kong, Paris, and Las Vegas; CBS’ “Rush Hour” aims to take its formula and convert it into a long-running comedy-procedural. The cast is different and the timeline has started over, meaning that it is, technically, a reboot, if we can go so far as to call the “Rush Hour” part of an extended cinematic universe. The bones of the show are identical to the film—the pilot, which aired last night, recreates some of the scenes of the film and even some of the fight scenes, including the semi-famous gun-stealing move that Lee teaches Carter.

And TV show “Rush Hour” engages with the same politically charged subtext that the film engages head-on; more than being just about two very different people working the same case, the story showcases the kind of resentment, discrimination, and distrust that can foment between two different minority groups in America. This is a theme throughout black cinema, from Spike Lee’s “Do The Right Thing” to the controversy over Chris Rock’s jokes at the Oscars; in the "Rush Hour" film, director Brett Ratner (who is not black, but has close ties to the black creative community) is toying with a cultural discourse that is both superficially slapstick and deeply rooted, and pivoting that towards black theatergoers who would then buoy the films to crossover success.

Which is why what is really confusing about the “Rush Hour” update is not that it exists; it’s that it is on the oldest and whitest broadcast network in America. CBS, a network with a median age of 56.1, is desperately trying to make inroads into a younger audience, given that the primary advertising demographic in America spans the ages 18-49. And though this analysis from the Awl is two seasons old, it puts CBS’ recent attempts to diversify its lineup in context.

“Rush Hour”’s Carter and Lee (Justin Hires and Jon Foo, in the reboot) are as of yesterday the only cast on CBS’ current lineup to be headed by leads of color; “Scorpion”’s mixed-race lead Elyes Gabel is playing a white man, and “Hawaii 5-0”’s relatively diverse cast is led by Scott Caan and Alex O’Loughlin playing Danno and Steve. So while “Rush Hour”’s premiere on CBS is an exciting one, it also raises some interesting questions. Is this a show designed to get (young) viewers of color to CBS, or is this a show designed to package (young) people of color to CBS?

The answer, probably, is both. Watching the “Rush Hour” pilot is an exercise in watching the show walk the tightrope of trying to move in opposite directions simultaneously, and though that isn’t necessarily bad, it is not particularly funny, either. Stereotypes about Chinese people, delivered from a stereotypical black character, to an audience that is accustomed to seeing largely white characters (and is, in all likelihood, largely white themselves)? It walks a line between tokenism and representation, traversing a path that I have previously called the “just one guy” phenomenon. In this case—especially because the show is going through the motions of the film’s plot points—the pilot is hardly memorable at all, a pale facsimile of a thing that might have been funny, once.

It is very early to guess what the rest of “Rush Hour” is going to be like, but as it proceeds, the show is right now a kind of test case for CBS. What exactly happens when you lob a show that combines stereotype with representation into a lineup that has not seen anything like it before? What, exactly, will viewers take away?

These are questions that are relevant to another network: TV Land. The network best known for airing reruns of classic sitcoms like “The Andy Griffith Show” targets the 25-54 demographic, meaning that like CBS, it skews older. It’s much more racially diverse, though; the cable platform only started producing scripted programming in 2010, and introduced a black family with its “Hot In Cleveland” spinoff “The Soul Man,” led by Cedric The Entertainer, in 2012. Tonight, it’s premiering “Lopez,” the latest effort by Mexican-American comedian George Lopez, who has been at the helm of any number of shows bearing his name, all with a different attempt at landing mainstream humor. There was “George Lopez,” in 2002 on ABC, a middlebrow family sitcom that ran for six seasons; “Lopez Tonight,” a late-night talk show on TBS that ran from 2009-2011, and “Saint George,” a raunchier attempt at bro-comedy that aired for 10 episodes on FX in 2014.

Lopez is a trenchant, funny stand-up comedian, but translating his humor to television—even to edgy cable television—proved a difficult task. “George Lopez” offered the appeal of a regular boring middle American sitcom, except with a Latino family; “Saint George” offered no appeal whatsoever. And interestingly, that’s a lot of what “Lopez” is about. The show is very much in the style of “Louie,” Louis C.K.’s single-cam dramedy that revolutionized prestige television comedy. (I read the replication as more homage than theft, but your mileage may vary.) In it, Lopez plays himself, a successful Latino comedian trying to figure out what comes next after divorcing his wife who gave him a kidney and recovering from the shame of passing out drunk on the floor of a casino in 2014.

And because he’s playing himself, “Lopez” and Lopez discuss the industry with intriguing frankness, whether that is in the form of George’s irritating agents and social media experts or his run-ins with the Star Tours van making rounds past his house. I find “Lopez” the most enjoyable form of George Lopez, and partly that’s because it’s so seemingly authentic. The intimacy of single-cam draws out his whole self, not just a punch-line-delivering persona for the camera.

Lopez is a self-denigrating, optimistic guy, one who is acutely aware of how the audience his success is based off of isn’t quite enough of a fanbase to pay the bills. In the show, he limps through the multiple spheres of the marginal performer turned success story—total nobody for some, revered celeb for others, mere dad to his daughter and upstart new money to his neighbors. His relationships with other Latinos are especially interesting; as I’ve written before, the demographic is the least well-represented on television, and in some ways, Lopez’s occasional neuroses are the result of knowing he’s one of the few guys like him who made it. It is true that George Lopez, both in “Lopez” and in real life, can barely get through five minutes without commenting on his own race or the general position of Latinos in society. But it’s also true that it’s hard to blame him.

Older, wiser, and slightly more self-aware Lopez is dropping into a TV Land lineup that is transitioning from targeting Baby Boomers to targeting Gen-Xers, following the aging population. Niche and nimble little TV Land is a far cry from multi-faceted, multi-tiered CBS, and though their audiences might overlap, their programming doesn’t, really. But where “Rush Hour” is a test balloon, “Lopez” feels like a weary withdrawal from the attempt to reconcile the upsides of mass appeal with the frustrating downsides of apparently necessary tokenism.

Which is to say, it was funny. Certainly funnier than “Rush Hour,” and generally an appealing little comedy, able to juggle things like identity and success and privilege and a general terror of aging with some nimble skill in a way that felt actually fresh. Mainstream appeal might be necessary to keep the bills paid, but it is the easiest way possible to kill a joke.