Wendi Deng is reportedly in a "serious" relationship with the Russian autocrat. Please let this be true 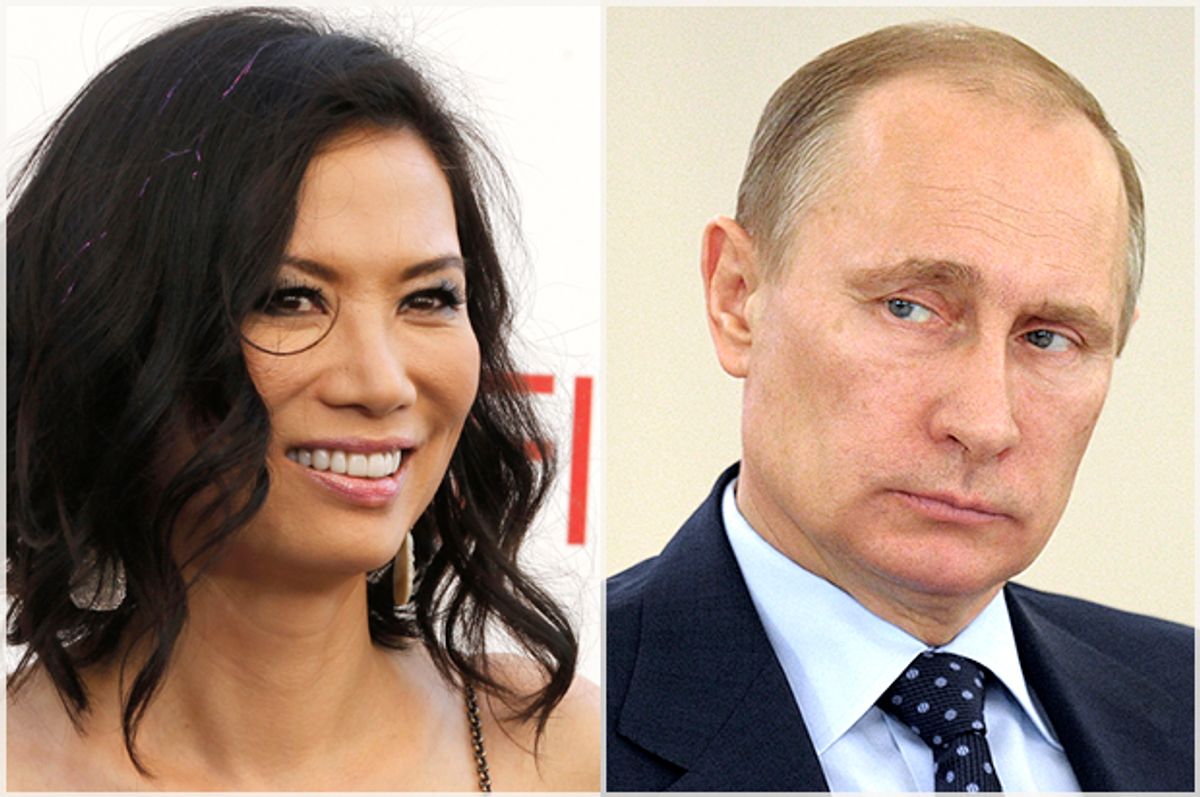 The rumor circulating around the corridors of power — from Washington, D.C., to Europe and Asia — is that Vladimir Putin and Wendi Deng, Rupert Murdoch’s ex-wife, are dating.

Reports of the pair have been floating around for years, ever since their respective divorces in 2014 and 2013.

One insider close to the powerful leader tells Us Weekly the relationship is “serious.”

This is literally everything you could ever want in a gossip item—international intrigue, complex power games, revenge against Rupert Murdoch, insiders close to world leaders—so, for the sake of argument, let's assume that it's the real deal, even though it very, very easily could be fake. (But it's definitely real.)

First of all, who in the world is this "insider" in Vladimir Putin's inner circle dropping everything to gab about how tight Putin is getting with Rupert Murdoch's ex-wife? Wouldn't people be worrying about, like, being disappeared for such indiscretions?

Putin's world is full of hangers-on and old buddies. Maybe the source was Arkady Rotenberg, his former judo partner who has, by sheer coincidence, become fabulously wealthy during Putin's tenure. Maybe it's Alexey Miller, who runs Russia's state oil firm Gazprom. Or maybe it's one of Putin's daughters! Or maybe a butler at one of his dachas saw Putin and Deng together and said to himself, "I have to tell Us Weekly about this right away." (While we're on that: Supposing someone privy to all of this decided to spill the beans, what would compel them to go to Us Weekly of all places? Does the magazine have a major foothold in Russia? Does Putin love finding out about how stars are just like everyone else?)

Also, how did the source know things were serious? Has Vlad been going around gushing to his closest friends about how he's never felt this way before? Did he get all choked up talking about how much Wendi Deng completes him?

Of course, we could be getting all of this wrong: maybe the "powerful leader" is actually Wendi Deng. After all, the phrase certainly suits her. This is a woman who moved from obscurity in China to the pinnacle of the global jet-set with dizzying speed. Deng is not to be underestimated.

Moreover, she definitely has a type. If you put Murdoch, Putin and Deng's other rumored paramour, Tony Blair, in a room together—and, let's face it, those three have almost certainly already been in a room together at some point during their lives—they would have a lot to talk about. Clearly, Deng prefers aging, power-mad megalomaniacs. Her standards would appear to be slipping, though. How sad is it that Rupert Murdoch is the best of that bunch? Blair and Putin have all of Murdoch's deceitfulness, jingoism and corruption, but none of his entertainment portfolio. All three men are despicable tyrants, but at least Murdoch's TV channel gave us "The Simpsons."

Deng also has excellent timing. Murdoch just got married to Jerry Hall (talk about another completely surreal pairing). He's currently on a blissful Twitter hiatus. What better moment to swipe his thunder, and with a man who's even more powerful and deranged than he is?

One of two things will now happen: Either the rumors will be shot down, and we'll all move on, or we'll get a long-lens paparazzi shot of Deng and Putin holding hands in Red Square. Really, the best thing would be if there's some sort of military exercise or parade and suddenly Wendi and Vlad are side-by-side on a balcony. Wait, is she going to move to Moscow now? What about her kids? Have they been hanging out with Vladimir Putin? Doesn't he scare children? OK, I'll stop before these questions consume me. This has to be true! It just has to!