WATCH: Clinton goes off on Greenpeace activist: "I am so sick" of the Sanders campaign bringing up my fossil fuel money 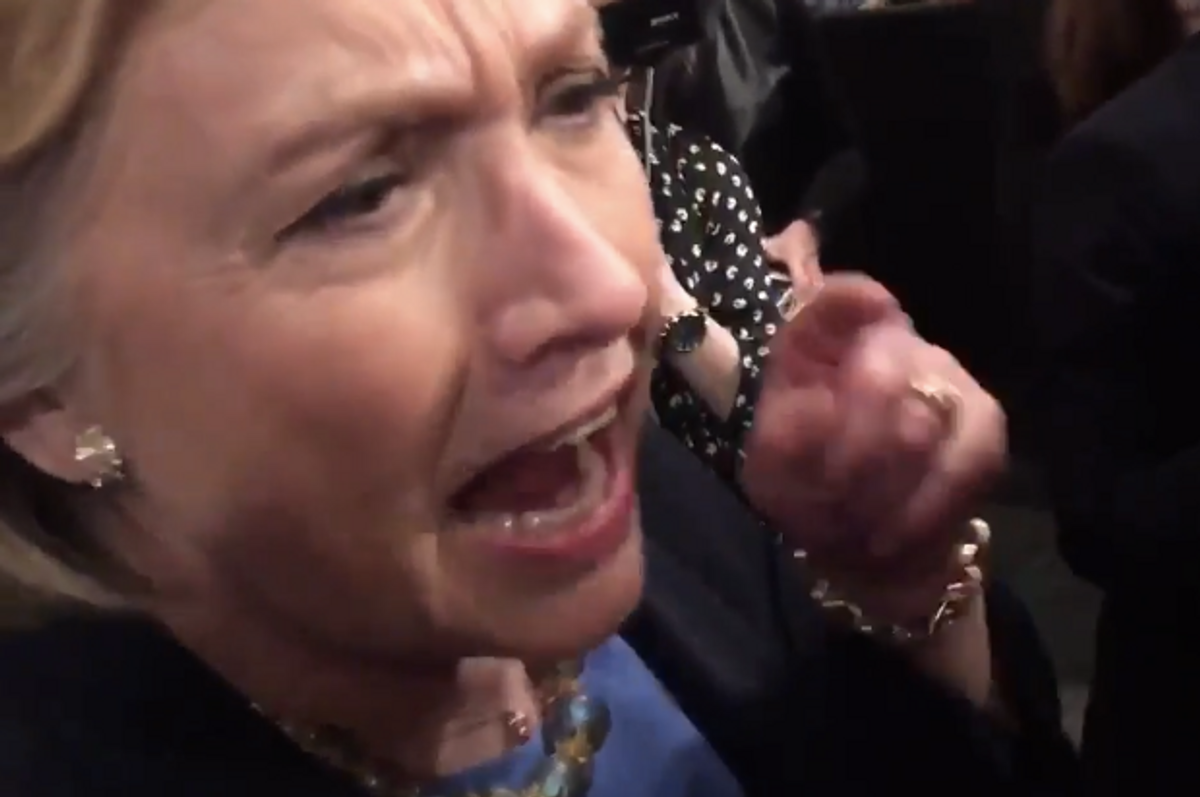 Hillary Clinton yells at a Greenpeace activist at her rally on the campus of SUNY Purchase on March 31, 2016 (YouTube/Greenpeace)
--

Democratic presidential frontrunner Hillary Clinton went off on an environmental activist on Thursday, after being asked about the large sums of fossil fuel-linked cash she has received.

At a Clinton rally on the State University of New York at Purchase campus, Eva Resnick-Day, an activist with the environmental justice group Greenpeace, asked Clinton, "Will you act on your word to reject fossil fuel money in the future in your campaign?"

Clinton quickly lost her patience. Her smile promptly morphed into a scowl and she yelled at the environmental activist, "I do not have — I have money from people who work for fossil fuel companies."

"I am so sick of the Sanders campaign lying about me," Clinton shouted, pointing angrily at Resnick-Day.

This incident comes mere days after a top official in the Clinton campaign insisted Hillary would not debate fellow presidential candidate Bernie Sanders unless he changes his "tone."

Greenpeace has detailed Clinton's many connections to the fossil fuel industry, arguing her campaign and the Super PAC supporting her have received more than $4.5 million from those who work in it.

Although the activist from the environmental group asked if the former secretary of state will "reject fossil fuel money" overall, Clinton implied she has not received any, instead making a misleading distinction between the corporations themselves and individuals tied to them.

"Nearly all of the lobbyists bundling contributions for Democratic presidential candidate Hillary Clinton's campaign have at one time or another worked for the fossil fuel industry," Mother Jones revealed in a July exposé.

She has received enormous help, Mother Jones reported, from "Democratic Party lobbyists who have worked against regulations to curb climate change, advocated for offshore drilling, or sought government approval for natural gas exports."

Among the prominent contributors to Clinton's campaign are lobbyists for Chevron, ExxonMobil, BP America, America's Natural Gas Alliance and more.

Clinton's campaign also has links to the Keystone XL pipeline, a project of the corporation TransCanada that has faced a series of delays since it was commissioned in 2010. Environmental scientists like former NASA official James Hansen have warned it would mean "game over for the climate," and activists have protested it for years.

In June 2015, Clinton's campaign announced that it had hired a former major TransCanada lobbyist as a consultant.

As secretary of state, Clinton also pushed for the pipeline. In 2010, she said her department was "inclined" to sign off on the project.

During her tenure as head of the State Department, Clinton also advocated strongly on behalf of the Trans-Pacific Partnership agreement, or TPP, which environmental and labor groups warn would be disastrous for the climate and local economy. Although the deal is 6,000 pages long and addresses a variety of obscure issues, it does not mention the phrase "climate change" once.

Despite openly supporting them for years, after pressure from the Sanders campaign, Clinton now claims she opposes both the Keystone XL pipeline and TPP.

Clinton has also received millions of dollars in speaking fees from Wall Street banks and corporations. In fact, in just 12 of such speeches, Clinton made approximately $3 million, more than most Americans will earn in their lifetimes.

She has been asked numerous times to release transcripts of her paid speeches, but refuses to do so.

An investigation by the Wall Street Journal furthermore revealed that Bill Clinton's speaking fees grew rapidly when his wife served as secretary of state.