Donald Trump has a big problem: Women don't just dislike him — they actually detest him

It shouldn't surprise that an unreconstructed misogynist has trouble with women voters. But it should scare GOPers 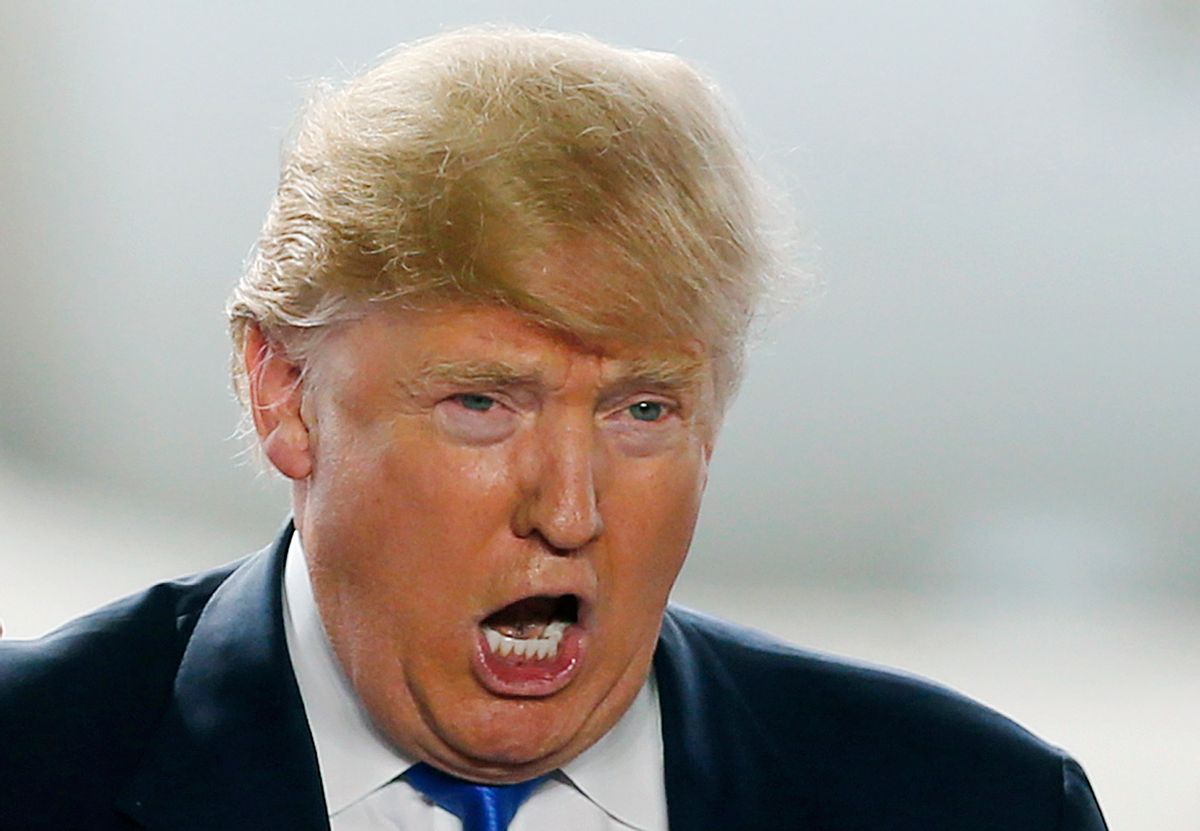 FILE - In this March 12, 2016, file photo, Republican presidential candidate, businessman Donald Trump speaks in Vandalia, Ohio. Trump wants to win the White House in November. House Speaker Paul Ryan wants to save the Republican Party for the future. Those goals put Trump and Ryan increasingly at odds over both tone and substance as the billionaire businessman barrels toward the GOP presidential nomination. (AP Photo/, File) (AP/Kiichiro Sato)
--

Yesterday, the news was once again all over Trump's latest flap over abortion rights, with one pundit after another talking about how it has really hurting him with women. Interestingly, it wasn't just liberal women who were appalled by his comments, that women should be punished for having abortions; conservative pro-life women were apoplectic. The last thing they want is some late-coming yahoo suggesting that just because abortion is murder,  any woman who has one is some kind of criminal. It might hurt the cause. But it wasn't just the abortion gaffe, it was the accumulation of Trumpian misogyny -- from his crude insults toward Heidi Cruz to his defense of his campaign manager manhandling a reporter -- that finally reached critical mass. His problems with women of all political stripes are real and they are getting worse.

Trump loves to cite his poll numbers and rattles them off constantly on the stump. He commonly lies about how popular he is and assures his crowds that he's a "uniter" whom everyone loves, even Latinos and Muslims and African Americans and women, all people he commonly demeans and insults.  But in a rare example of almost humble bewilderment, he admitted to Chris Matthews at the infamous town hall on Wednesday that he didn't understand why he was polling so badly among women:

He has never reached anything close to a positive rating with women and has done much better with men in every primary and caucus. In the latest CNN/ORC poll, 73 percent of women have a negative view of Trump, a number that's up 14 points since the fall. And that was before the Heidi Cruz insults and the news of his campaign manager being arrested for assaulting a female reporter.

Sadly, that 73 percent does not include a majority of Republican women. Most of them seem to like him just fine. And although his negative rating has grown from 29 percent to 39 percent, he's still carried the woman vote in most of the GOP primaries. Still, the fact that most Republican women like him that much actually proves how loathed he is by Independent and Democratic women. It pretty much has to be all of them in order for him to have a 73 percent negative rating.

And that CNN poll is not an outlier. Virtually every poll done in the last month shows him with gigantic negatives among women: 67 percent (Fox News), 67 percent (Quinnipiac University), 70 percent (NBC News/Wall Street Journal), and 74 percent (ABC News/Washington Post). And since the Democratic Party already has more women voters than the Republicans do, this translates into a serious disadvantage in the fall.

The next big primary contest is Wisconsin, and the latest numbers show Trump in trouble. The GOP electorate there is more ideologically conservative and less likely to brush off the kind of apostasy Trump demonstrated with his abortion comments. According to the gold standard Marquette University poll, Trump has a 12 point gender gap there, while Cruz and Kasich are both running even with both men and women. The race is close in the state, and that could very well be the difference.

If Trump does get the nomination, the general election could be catastrophic for the Republicans. Mitt Romney actually won white women by 14 points (56 to 42 percent) in 2012, and still lost. Meanwhile, the ABC/Washington Post poll  shows that 68 percent of white women have a negative view of Trump. It's highly unlikely that he would even come close to winning that group at all, much less in the numbers needed to win a general election. (Don't even ask about women of color. They loathe him even more.)

It's not that Ted Cruz does much better. That gap would likely be just as big with him at the top of the ticket. And according to the latest PPP Poll it's highly unlikely that even if the establishment manages to helicopter in their savior Paul Ryan they could improve their chances much:

Romney is incredibly unpopular nationally now- his 23/65 favorability rating is even worse than the 29/63 Trump comes in at. Clinton (45/32) and Sanders (48/31) each lead Romney by double digit margins. Ryan would trail Clinton 44/39 and Sanders 45/38, numbers not terribly dissimilar to how Trump polls against each of them.  It's not clear Romney or Ryan would do much to save the party this year.

So, the big question is why? What is making the GOP poison to so many American women? With Trump it's easy to assume that his obnoxious braggadocio and juvenile behavior is off-putting to many women. His demeaning sexism and misogyny are on display on a daily basis and his paternalism is insufferable. Take this comment to Wolf Blitzer about his Heidi Cruz tweet:

"I think people understand. These politicians, I know them. They say far worse when they’re in closed doors or they’re worth a group of people who they trust. Nobody respects women more than I do. Nobody takes care of women, and they take care of me ... I’ll take care of women, with women’s health issues, far better than Hillary Clinton, who’s a total phony, will take care of women, if she’s even allowed to run."

It is no wonder women find this man repellent. But it isn't just Donald Trump's noxious personality. The GOP has had a growing problem with women for years now. Trump is a symptom not a cause. After all, a Republican presidential candidate hasn't won a majority of women since 1988. There's something else going on here.

From the time women got the vote until the 1960s women tended to vote the same as men. But ever since 1980 their turnout has been higher and a majority identifies as Democratic. According to data compiled by the Pew Research Center, they are more supportive in general of liberal policies like health care, assistance for kids, the elderly and the disabled, education, the environment and reproductive health. According to Kelly Dittmar of Rutgers’ Center for American Women and Politics, the feminist movement, increased participation in the labor force, and greater reliance on government programs are also factors in women moving left. The Republican Party's responses to these concerns have been inadequate, to say the least.

So, while Donald Trump, the unreconstructed misogynist jerk, is undoubtedly making things worse for the Republican Party in this cycle, it would be a huge mistake to assume that simply replacing him with a less odious personality would solve this problem. If Republicans are truly concerned about their growing gender gap they're going to have to do something about their odious agenda.