The Post resorts to a stupid sexist joke about Clinton, showing that election year gender battles are just starting 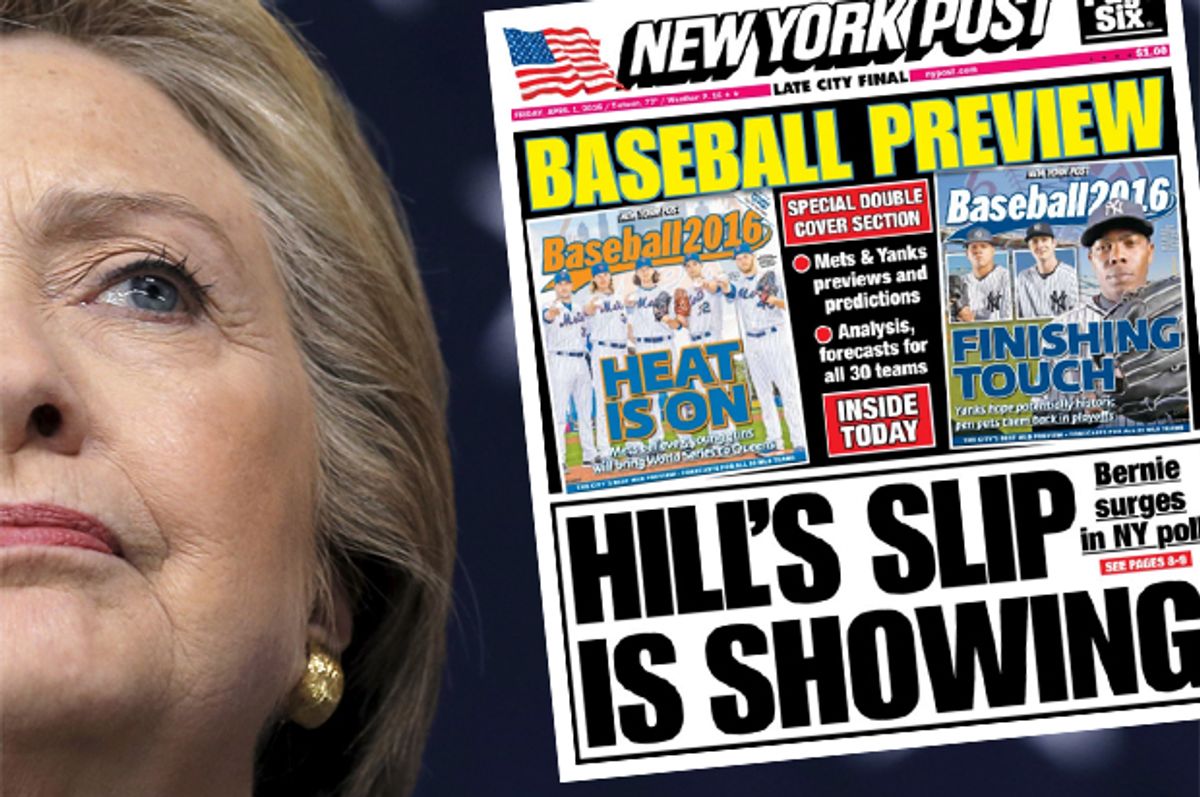 I have this working theory that it's not a coincidence that a blunt misogynist like Donald Trump is the Republican favorite in the same election year that we have a strong chance of getting our first female president. Benevolent sexism like head-patting and talking to women like they're children tends to thrive better in a situation where women aren't legitimate threats to male power. But make an actual bid for power, as many women can tell you, and suddenly the sexism stops pretending to be sweetly condescending and turns into open hostility. Cheek-pinchers become butt-grabbers. Insecure men stop calling you "honey" and switch to term "bitch."

That this would happen on a national scale as the insecure men of the nation collectively freak out over the possibility of a female president is, under the circumstances, not surprising. Thus, Donald Trump. And thus Friday's front page of the New York Post. Like most sexist jokes, there's no real humor here. No irony, surprise, insight into the human condition or even cleverness to the punning. The punchline amounts to "she's a woman!" and the shared laughter comes not from genuine amusement, but to show solidarity with the notion that it is messed up to let a woman rise so high in politics.

It isn't just that they used a blatantly sexist joke, either. This headline is coupled with a story that's written in a way to make you think that Bernie Sanders has a real chance over Hillary Clinton in New York, but if you actually dig into the numbers, you'll find that no, she still has a healthy lead over him. This entire story is hinging on a single poll that shows the two candidates closer than they've ever been, but she is still 12 points ahead of Sanders. It's a classic case of massaging the story to fit a narrative that's based more in wishful thinking than evidence.

And let's be clear: This isn't because Rupert Murdoch and the folks at the New York Post are good socialists who would totally vote for Elizabeth Warren, they swear. Sanders is just a cudgel being used her to beat up Clinton.

This headline caps off a week of escalation of gender anxieties in the presidential election, much of which stems from the honking clown show that is the Trump campaign. It started with the arrest of Corey Lewandowski, Trump's campaign manager, after he was charged with grabbing a reporter's arm so hard it left bruises.

It's a charge that, on its surface, seems like it has no gender component to it, but the Trump camp decided, perhaps on instinct, to go there anyway, leaning hard on misogynist scripts that have been used for millennia to shame and discredit women who speak out about sexual abuse and harassment. The speed with which they turned this incident to a gender thing shows how these anxieties are never far from the surface, and will jut out at ugly angles at the slightest provocation. It's not hard for Trump and his supporters to fit every story into a narrative about putting women in their place, since the entire year is defined by trying to do that to that most threatening of women, Hillary Clinton.

Then Trump came out with his comments about how he wants to punish women for getting abortions, leading to a nationwide debate in right-wing circles over whether women are criminals who need locking up or simply mentally unstable imbeciles who cannot be allowed to make basic medical decisions for themselves. But whether you fall into the "women are evil" or "women are idiots" camp, either way, it's hard to imagine you think such an inferior sex could ever produce a suitable candidate for president.

The New York Post doesn't seem to have much love for Trump, but this cheap and unfunny sexist joke on the cover is a reminder of how their newspaper, along with a myriad of other reactionary publications, talk radio shows, and the Fox News network all laid the groundwork for someone like Trump to be a candidate. Day in and day out, they pour out a combination of objectifying talk about women combined with over-the-top anxiety-mongering about smart and powerful women.

In other words, right-wing media is a constant stream of validation for insecure, sexist men who want women to stay is secondary and submissive roles. Is it any wonder that, after decades of being told they're being victimized by women seeking equality, such men are going to panic and start backing someone like Trump the second it seems that a woman might really be able to win the White House?

There's a lesson in this, but clearly the New York Post isn't going to learn it. Sure, the same male insecurity they've stoked for decades is leading to a situation where a lecherous misogynist is going to win the Republican nomination, but hey, that's no reason to pause for a moment before continuing to validate the ugliest inclinations of the most toxic and sexist men in our country.

There is good news in this. Outside of the imbecilic circles that think a joke like "Hill's slip is showing" is funny, the toxic masculinity antics are not going over well. New polling data from the Washington Post shows that all demographics, basically, hate Trump, who is the nation's leading stand-in for insecure men who turn to misogyny to shore up their fragile self-esteem.

Which is why Hillary Clinton will get her revenge in the sweetest way possible: by trouncing this loser at the polls, and showing all the sexist haters at places like the New York Post how much this world really has changed for the better.