Bernie shot back; the activist said "I was genuinely shocked," insisting Clinton "needs to stop taking that money" 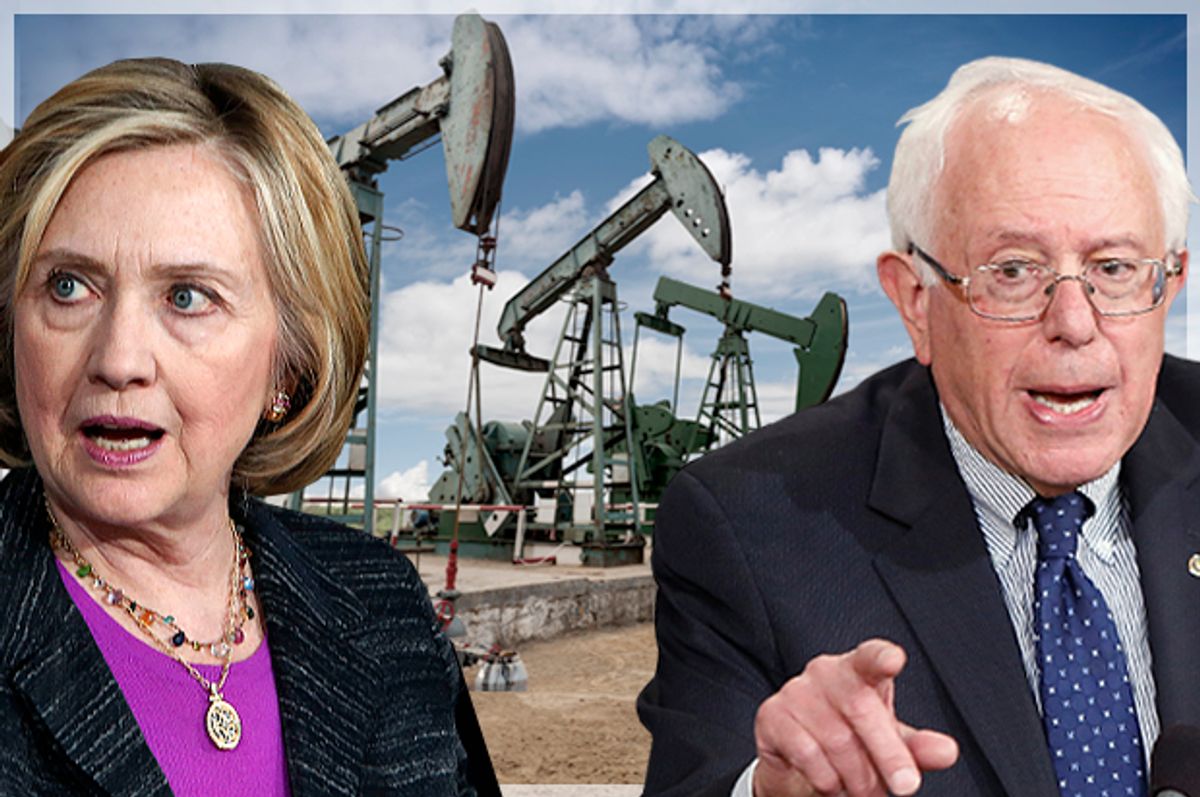 The internet was abuzz Thursday night with talk of the millions of dollars of fossil fuel-linked money Hillary Clinton has received, after the Democratic presidential candidate went off on an activist from the environmental justice group Greenpeace.

“Will you act on your word to reject fossil fuel money in the future in your campaign?” environmental activist Eva Resnick-Day asked Clinton at her rally on the campus of the State University of New York at Purchase.

“I do not have — I have money from people who work for fossil fuel companies,” Clinton shouted angrily in response, pointing at the young woman and yelling “I am so sick of the Sanders campaign lying about me.”

She was asked if she will “reject fossil fuel money” overall, but Clinton countered by implying she has not received any, making a misleading distinction between fossil fuel corporations and those who work for them.

Her campaign released a similarly deceptive statement, insisting it “has not taken a dollar from oil and gas industry PACs or corporations."

"The simple fact is that the Sanders campaign is misleading voters with their attacks," Clinton's campaign claimed.

Environmental groups immediately recognized what the presidential candidate was doing and called her out on it.

"We would welcome a statement from Clinton saying that she plans to stop taking this money going forward to prove to young people like Eva that she’s listening to them, not her biggest donors,” Dorozenski added.

“Secretary Clinton is conflating Greenpeace with the Sanders campaign, but we are an independent organization, and our research team has assessed the contributions to all Presidential candidates."

The eco group has documented Clinton’s close ties to the fossil fuel industry, arguing her campaign and the Super PAC supporting her have garnered more than $4.5 million from those who work in it.

“Clinton must immediately pledge to reject all money fossil fuel from interests to prove that she would keep fossil fuels in the ground, and she needs to start with Exxon’s own Theresa Fariello” (a lobbyist who raises money for Clinton's campaign), stressed Yong Jung Cho, a spokesperson for 350 Action.

Fossil fuel interests poured at least $3.25 million into the largest super PAC supporting Clinton, according to a report by VICE News.

Mother Jones also exposed in July that “nearly all of the lobbyists bundling contributions for Democratic presidential candidate Hillary Clinton’s campaign have at one time or another worked for the fossil fuel industry.”

350 Action criticized Clinton for these practices: “Voters who care about the health of our climate, our communities and our democracy have repeatedly asked Clinton to refuse fossil fuel money — after the way she responded yesterday, she needs to finally take the pledge and refuse donations from those who profit from destruction.”

Bernie Sanders' campaign also shot out, pushing back against the claims that it is lying.

Activists have for many months been calling on the Democratic presidential candidate to break ties with the fossil fuel industry.

Eva Resnick-Day, the activist who posed the question to Clinton that instigated her irate response, published a blog post about her experience on Greenpeace's website.

"I was genuinely shocked by her response," the young woman wrote.

"The first step a candidate can take to stop fossil fuels is to stop taking fossil fuel money. That money matters when we hear great things about climate in Clinton’s speeches, but want to be sure she’ll truly listen to the people when she is in office," Resnick-Day explained.

She noted that environmental activists have constantly attended Clinton's events and asked her to reject fossil fuel money in her campaign. The night before the incident in New York, in fact, more than 40 activists gathered outside of a Clinton fundraiser and asked to speak with her. "She did not cross the street to talk to us," the Greenpeace activist recalled.

"I hope that this video starts an important dialogue on the national scale about fixing our democracy and taking a stand against corporate interests like the fossil fuel industry, so we can run a democracy that is beholden to the people, not campaign contributions," Resnick-Day wrote.

"To prove to people that she’s really serious about keeping fossil fuels in the ground, [Clinton] needs to stop taking that money today."

In February, 350 Action asked Clinton at a rally if she would "stop taking money from federally registered oil and gas lobbyists." Clinton played dumb, claiming "I don't know if I am" before maintaining that fossil fuels lobbyists are "giving money that I’m going to use against them."

The environmental group blasted Clinton for her hypocrisy on hydraulic fracturing, the Keystone XL pipeline and the Trans-Pacific Partnership, all of which she has supported in the past but claims to oppose now.

The Clinton campaign also has links to the Keystone XL pipeline, which environmental scientists like former NASA official James Hansen have warned would mean "game over for the climate" if built. Clinton's campaign has hired as a consultant a former major lobbyist for TransCanada, the fossil fuel corporation that seeks to build the pipeline.

Greenpeace does not endorse candidates, but it notes that Sanders has been much more willing to pledge to rebuke fossil fuel money.

"Earlier this year, we asked both Secretary Clinton and Senator Sanders to sign our pledge to #fixdemocracy, and while Sanders signed, Clinton did not," the environmental group said in a statement. "We intend to continue to challenge all candidates to listen to the people, not their biggest donors."