Mississippi vs. Everyone: State's pushing obscene law that's not only anti-LGBT, it could also force women to wear makeup 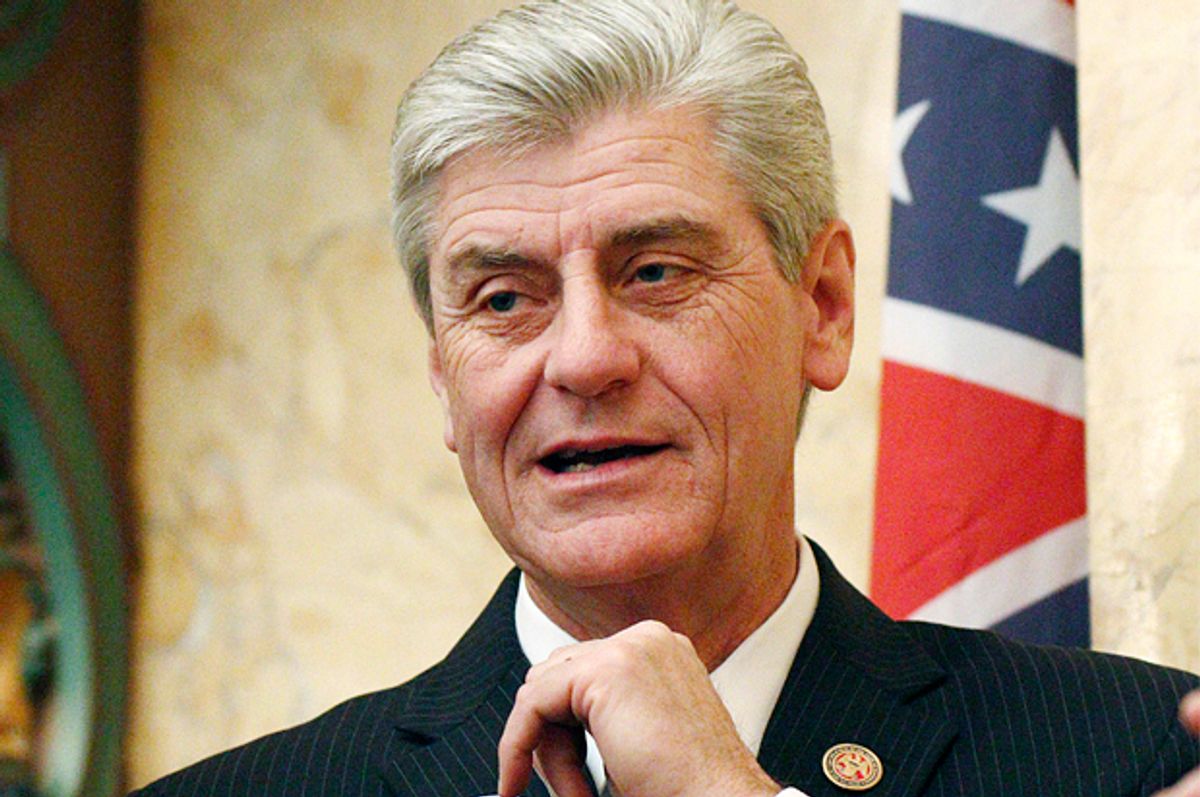 The 2016 legislative session has been a competition between red states to see who can pass the most hateful anti-LGBT bills under the guise of "religious freedom,' but Mississippi state Republicans look like they're going to emerge the winner. Friday, the state house passed the final version of a bill meant to protect and encourage business owners in the state to discriminate against LGBT people, while simultaneously enshrining, in violation of the constitution, the idea that conservative Christianity is the only legitimate religion.

But, because they have to win the war of the Bible-thumpers, Mississippi Republicans went a step further than other states that have passed similar anti-gay bills. This law not only protects discrimination against LGBT people, but against any person who has sex outside of marriage. It also makes it easier for employers and schools to strictly police the way you dress to make sure it's masculine or feminine enough. If your boss thinks proper ladies wear make-up, he can cite "religious freedom" as a reason to force you to do so, and the law will protect him for it.

The state laid out three religious beliefs that give business owners broad permission to discriminate against people on the basis of:

The sincerely held religious beliefs or moral convictions protected by this act are the belief or conviction that:

(a) Marriage is or should be recognized as the union of
one man and one woman;

(b) Sexual relations are properly reserved to such a
marriage; and

(c) Male (man) or female (woman) refer to an individual’s immutable biological sex as objectively determined by anatomy and genetics at time of birth.

These are, to be clear, the only religious beliefs the state deems worthy of extra-special protection. If you belong to a church that doesn't preach hate — and there are many faiths, both Christian and otherwise, that accept LGBT people and don't think premarital sex is a sin — too bad, so sad. The state of Mississippi doesn't think your religion is a legitimate one. The only faith deemed worthy of this kind of legislation is the kind that teaches that religion's purpose is in policing other people's sexual behaviors.

The bill then goes on to offer two levels of protection for bigots who want to discriminate, with religious organizations getting broad rights and private persons and business owners getting somewhat less expansive, but still terrifying rights. Religious organizations are allowed to deny employment, housing, and other services. Private businesses are allowed to deny any marriage-related services (including jewelry selling) to anyone who meets the three criteria. State employees can refuse marriage licenses, as well, and they are offered special protections to "express" the above religious beliefs. Which means that if you work for the state and enjoy haranguing gay coworkers or single women about how they're going to hell, it will be close to impossible to fire you for it.

To be clear, being able to discriminate against gay people, transgender people and fornicators is already legal, to one extent or another, in Mississippi. What this law does is deny the state the right to "discriminate" against anyone who would do so. That might seem minor, but in reality, removing any threat of losing government money or contracts for forcing your bigoted religious beliefs on others is actually a pretty strong check on a lot of this behavior.

For instance, a lot of this bill would make it easier to discriminate against people who are seeking social services. As the ACLU of Mississippi points out, homeless shelters, food banks, and day cares who call themselves "religious organizations" — i.e., many to most of them — would be able to turn away a single mother and her children on the grounds that she's a sinful fornicator. Religious charter schools who get government money could expel students who are believed to be having sex. Adoption agencies can discriminate not just against gay couples and single people, but against any couple they believe had sex before they were married.

The law also offers broad protections to those who would deny medical care to people. If you work for hospital or clinic that gets government money, you can deny transgender people treatments related to their transition or "psychological, counseling, or fertility services" to anyone in the official list of naughty people. If a counseling service kicks you out for being gay or having sex outside of marriage, they can't lose their government contract over it under this bill.

As the ACLU points out, this also allows foster parents to force kids into "conversion therapy" run by quacks who believe you can pray the gay away, and the state cannot do anything about it.

The bill also grants broad rights to businesses and organizations to play the gender police: "The state government shall not take any discriminatory action against a person wholly or partially on the basis that the person establishes sex-specific standards or policies concerning employee or student dress or grooming."

So if a school decided to punish a girl or a trans boy for getting a short haircut or for refusing to wear skirts or make-up, then the state couldn't do anything about it.

Beyond just the specific threats, this bill is troubling because it's about building up legal precedent for two repugnant ideas: That discriminating against people on the basis of sexuality and gender is acceptable and that the state should be flagging certain religious beliefs as better than others. In a sane world, both notions would be seen as flagrant violations of the constitution, which forbids establishment of religion and upholds equal protection under the law. But with the Supreme Court in disarray, it appears that Republicans are feeling feistier than ever in stomping all over the foundational principles of this country.

On top of all that, this bill violates some pretty important federal regulations and could lead to the federal government stripping the state of education funding. Hopefully, Gov. Phil Bryant will realize this kind of radical bigotry against not just LGBT people but the 95% of Americans who have had premarital sex  is a step way to far, and will veto it.