I don't know how to discuss being raped: I am different, permanently, but there's no language to describe how

I'm a man. I was raped. It changed me forever. But it wasn't, say, losing a child, and I still lack the right words 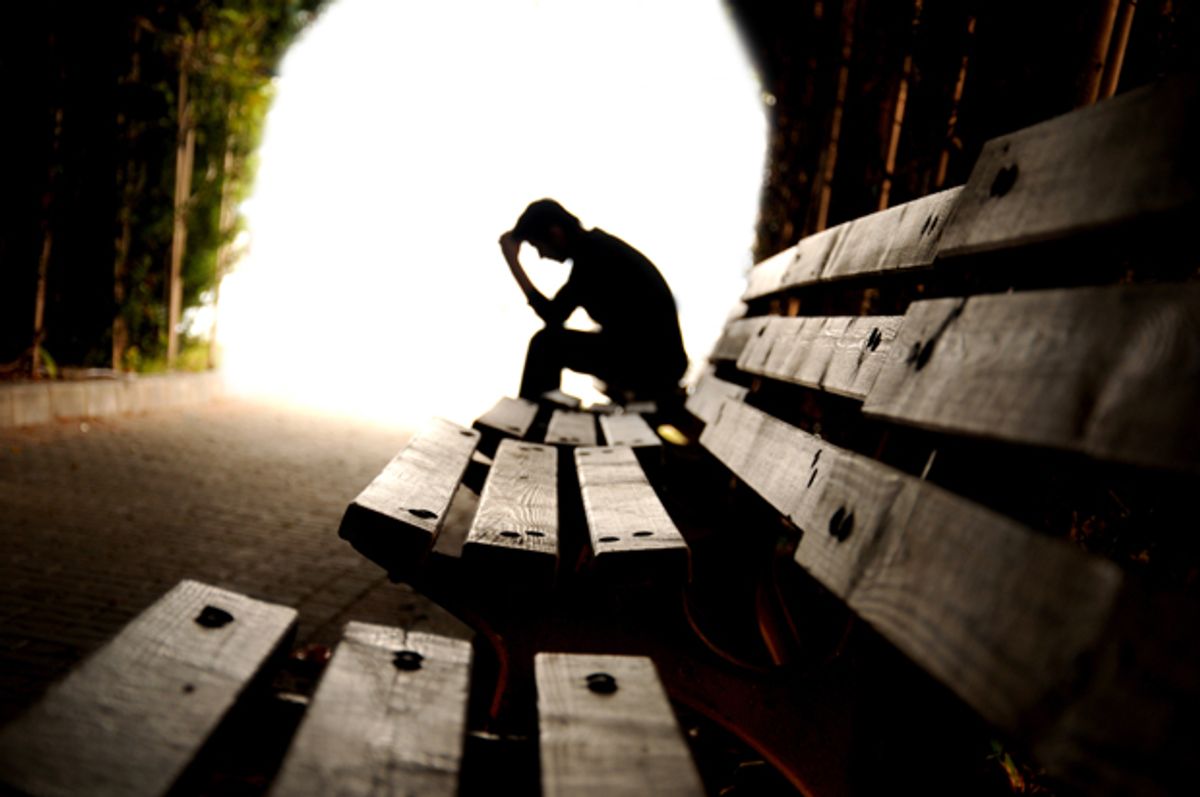 Excerpted from "On Being Raped"

Rape is loss. It deprives the victim of something vital, whose importance is only recognized when it is no longer there. The change is permanent and irreversible. That is a hard thing for anyone to accept, and especially difficult, perhaps, for men, whose way of being in the world does not sit comfortably with the idea of losses that can never be made good.

At present we lack an adequate vocabulary for speaking about loss. Our favored idioms are rather about the regaining of something that has been temporarily misplaced, or the restoration of something that is (always reparably) damaged. We are intensely ill at ease in the presence of anguish that cannot be relieved, and mourning that cannot be assuaged. We shy away from parents who have lost children, or cancer sufferers who are terminally ill, not because we do not feel for them in their pain, but because we quite literally do not know what to say.

People who have been raped are brought up constantly against these limits of language. I make my living through the use of words, yet I find myself as tongue-tied when speaking of such things as anyone else. The expressions I want to use are melodramatic, hyperbolic, so much so that even to think them is embarrassing. Four unpleasant hours in an upstairs room is not like the death of a child. It is not like being a prisoner in a concentration camp. One feels selfish doing or saying anything that would in any sense seem to make a short-lived episode from which one was able to walk away comparable, however remotely, to sufferings so much greater than one’s own.

Yet there is a truth in the melodrama that the rhetoric of “healing,” “recovery,” or “becoming a survivor” lacks for me, and that is its insistence that what I have lost is never coming back. This is something that I know to be true at the innermost core of my being. Parts of my personhood—the better parts—were severed in that room. What is left is still recognizably mine, and existed before the attack, but this remnant is now out of balance. I can add elements to it to try to make up the difference, and over the years have done so. But the result is a brittle composite that bears only a passing resemblance to what preceded it.

Almost all the changes are negative. I nearly said “all,” because the idea of rape as unmitigated loss is also one that feels intuitively true to me. That wouldn’t be strictly accurate, though. I have gained one thing out of the experience: a measure, however inadequate, of tolerance for the failings of others. Before this happened, I had all the makings of a fine young prig, with a highly developed and thoroughly inflexible sense of rectitude. Afterward, my moral compass may not have shifted dramatically, but I became far more conscious of everyone’s need, and especially my own, for forgiveness rather than righteousness. When I do stand before the judgment seat of God, the only thing I expect to have to say, and the only thing likely to do me any good, is “Be merciful unto me, a sinner.”

In every other respect, though, I am the worse for having gone through it. It was not a learning experience, a wake-up call, a trial by fire, or a challenge triumphantly overcome. Rather it was a forced exposure to the world as it really is. The veil that separates normal life from barbarity and horror is tissue-paper thin, and can be torn aside with shocking ease and a complete lack of warning. Dreadful things can and do happen, and having once happened can do so again. This seems like a truism until it is lived. Then it takes on a significance that colors every aspect of one’s future life. It’s not a question of being wary, or trusting fewer people, or looking for hidden dangers, though one does all those things. Nor is it even living in fear, because when one knows the thing to be feared, it loses most of its power to disturb. It’s more a matter of anticipation, of living in a constant state of expectation for the next moment when oneself, or a loved one, will be dragged suddenly through the veil to the other side, to receive another hands-on lesson in the way things really are. As will surely occur, sooner or later.

I adhere to the word “victim” rather than “survivor” in the same way that I have chosen to acknowledge what happened to me as “rape” rather than “sexual assault.” Others characterize their experience differently, for excellent reasons that I would never seek to contradict. For me, “victim” comes closest to the heart of the matter. I cannot claim agency in this entire episode, because I didn’t have any. Whether I survived or not was something that lay wholly in my rapist’s hands. In the end I lived because he decided to let me live. And I’m still unable completely to shake off the thought that if anything I did contributed to that outcome, it might have been purchased at too high a price.

There is a distinction to be drawn between recognizing one’s own victimization and wallowing in victimhood. I agree with the man who said that the most dangerous emotion in the world is not hatred but self-pity. Not because it turns one into an intolerable puddle of gloom, burdensome to one’s friends and relatives and offensive to the neighbors, but because under the influence of self-pity, there is nothing of which one is not capable. As became clear to me that night, and clearer still in its aftermath, my rapist felt sorrier for himself than anybody I have ever met. Whatever richly merited suffering I might experience, he believed, was as dust in the balance in comparison with the wrongs that I and others had done to him, a trivial recompense for the endless sacrifices he had made throughout his priestly ministry. In his eyes he was not committing rape, but doing justice. Both he and I were getting what we truly deserved.

I have little patience with those who offer their victim status as an excuse for bad conduct. Having been sexually abused exempts no one from the obligation of behaving like a human being, the first and most inflexible requirement of which is not to harm others. My instinct to believe those who disclose prior abuse inverts itself in the case of sex offenders, who unlike the rest of us derive benefit rather than harm from advancing these claims. But even if their histories of ill treatment are proven, they may enjoy my sympathy as readily from behind bars, while they serve their sentences, as from anywhere else.

Victimization, though, is a reality, and too often a very grim one. I wish nothing but the best to those who are following a therapeutic path, and who find hope and healing in it. I would like to see many more resources and options available for them than the criminally inadequate levels of provision in countries that could well afford to do far more than they are currently doing.

Still, not everyone can be reached by these means. For some of the most damaged and vulnerable victims of rape, men and women alike, “healing” or “renormalization” may not be possible, and arguably not appropriate even as a theoretical goal. However well intentioned, placing pressure on them to “tell their stories,” “reclaim their agency,” and transform themselves from “victims” to “survivors” can function simply as another demand to “get with the program” and conform themselves to established psychotherapeutic categories or bureaucratic imperatives—or, in plain English, to make everyone around them feel better by agreeing that they are no longer in pain. When they are unable to do so, the conclusion logically follows that they have no one but themselves to blame if they won’t take on the burden of doing the necessary “healing work.”

These are assumptions that can kill and, I fear, not infrequently do so. Rape is not just an ordeal to be endured; for some it is a death sentence with an indeterminate stay of execution. Many victims do benefit from the standard therapeutic model. But others are unable to meet the demands it makes of them, or to cope with the (implicit or explicit) victim-blaming that ensues from their inability to comply with its requirements. For them, the challenge is not “healing”—an impossibly remote or unrealistic goal—but making it through the next twenty-four hours without killing themselves. If they are handled clumsily and insensitively, even that limited objective might appear unachievable.

Once again, the metaphors we use matter. Rape victims are not “broken” individuals who need fixing, or sick persons who need healing. They are hurt women and men who need compassion in the face of grievous misfortune. Some of them won’t ever get over it, no matter how hard they try. I don’t know what compelling reason exists to make them feel that they have to.

Excerpted from "On Being Raped" by Raymond M. Douglas (Beacon Press, 2016). Reprinted with permission from Beacon Press. All rights reserved.

Raymond M. Douglas is the Russell B. Colgate Distinguished University Professor of History at Colgate University