Our "Falling Down" election: What an Angry White Man on a rampage can tell us about Donald Trump and voter rage 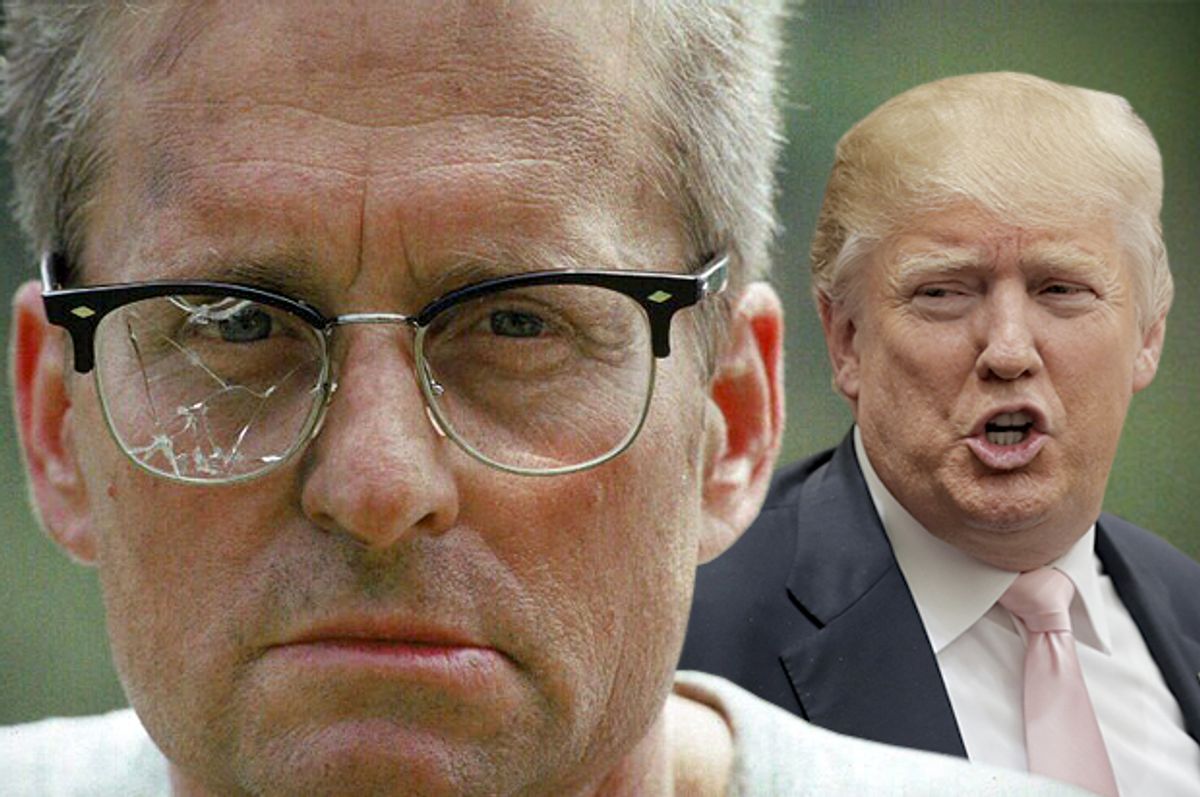 In 1993, a movie came out that followed a laid-off defense engineer who walked, grim-faced, across Los Angeles after being stopped dead in a traffic jam. The movie was deliberately zeitgeist-y: In his white shirt, tie, and crew cut, Michael Douglas’s character was somewhere between an Everyman and a parody of a certain kind of white guy -- embodying the rage of the “entitled” Caucasian who was now seeing how life worked for working class people and minorities. He encounters almost no other middle-class white males in his march across the dirty, chaotic city. Instead, he shouts at a Korean market-owner for his accent and prices -- trashing his shop -- attacks two Latino men with a baseball bat, and walks away callously as a mostly nonwhite group are hit by bullets intended for him. Many of the shots of the city show non-English writing on signs and storefronts. He’s also alienated from his wife (played by Barbara Hershey), who has filed a restraining order against him.

The movie was read at the time as a statement about the Angry White Man, as well as a general feeling of frustration, experienced widely, as the nation emerged from a recession. Here’s a review by Hal Hinson in the Washington Post:

As a description of our collective recession-era funk, "Falling Down" is to the early '90s what "Network" was to the late '70s. Written by Ebbe Roe Smith, the movie appraises the state of our national disease in a manner that goes far beyond what economic indicators tell us. If the last election was about change, the soul sickness shown in "Falling Down"reflects precisely why that change was essential. It's the grim chart at the end of our hospital beds.

The movie seems like a natural to describe the emergence of Newt Gingrich, who drew heavily from discontented middle-class whites. The film could serve, more recently, as an explanation of the psychology of the Tea Party, especially given many of those voters’ discomfort with multicultural America. A 2010 posting on Breitbart did both these things.

In 2016, the movie seems like a natural reference point for the wave of frustration Donald Trump is riding. Trump’s support comes heavily from white men, some of whom, like Douglas’s character, lament the way the country is changing, are given to violence, and express themselves through an intense, macho brand of anger.

This Esquire story updates the movie to our era and the current Republican frontrunner.

Falling Down is about a toxic mixture of self-pity and the hunger for order. But both the movie's creators believed that a man like William Foster was an anachronism; the world had passed him by. They were wrong. Donald Trump has tapped into a certain resentment toward the cultural shifts afoot in the U.S., and it is enough, probably, to launch him at least to become the Republican party's nominee.

This won’t be the last of these pieces, and there’s a reason they’ll proliferate. The parallels between Douglas’s character (known as D-FENS, for his license plate) and Trump voters are real.

But they’re hardly a perfect fit. Some of these differences are less serious than others. For instance, Douglas’ character is a West Coast urbanite. Trump’s support comes most strongly from rural people in New York State, Appalachia and other parts of the South. The difference in education is perhaps more important: The “Falling Down” character is an engineer; Trump support is strongest among voters without college degrees.

One thing they do have in common remains important, and it part of what’s most interesting about the movie: Except for a scene in which D-FENS confronts a neo-Nazi and another in which he lashes out at two wealthy golfers, his conflicts are almost all with people poorer or less privileged than he is. And he feels, from what we can tell, nothing but contempt for these others. He certainly doesn’t see himself as caught in the same economic web as those he disdains. He doesn’t realize that they’re struggling with something too. There’s just about no empathy coming from him, and even less compassion.

In another way, the film remains relevant: A lot of people — and not just racists or people who are inherently resentful — have seen their lives stall or turned upside down because of the impact of the Great Recession, the spike in rents and home prices, the reshaping of the economy and other changes. Liberals, affluent urbanites and professionals in the media condescend to these people at their peril. The last decade has shown that economic shifts can unseat even those who thought they were protected. Sneer at people who have been downsized, and you may find it happening to you. Or you may find an even more virulent political movement growing.

Something new seems to be happening now, as well. Bernie Sanders, who taps into similar fears and resentments as Trump, continues to win voters while Trump seems to be more and more disliked. The Washington Post reports:

The fading of Trump’s support may have to do with more than just his hard line on abortion, which has certainly hurt him with women. It also may be that he has too much in common with Michael Douglas’s character. Anger can be compelling, especially in the short term. But if someone — whether a billionaire or a downsized engineer — demonstrates no empathy, no sense of common humanity, it’s just hot air. In a two-hour movie, the frustration can hold our attention. But month after month, someone full of rage and no sense of other people’s pain or experience becomes tiresome. Americans — at least a few of them — may be seeing this now.