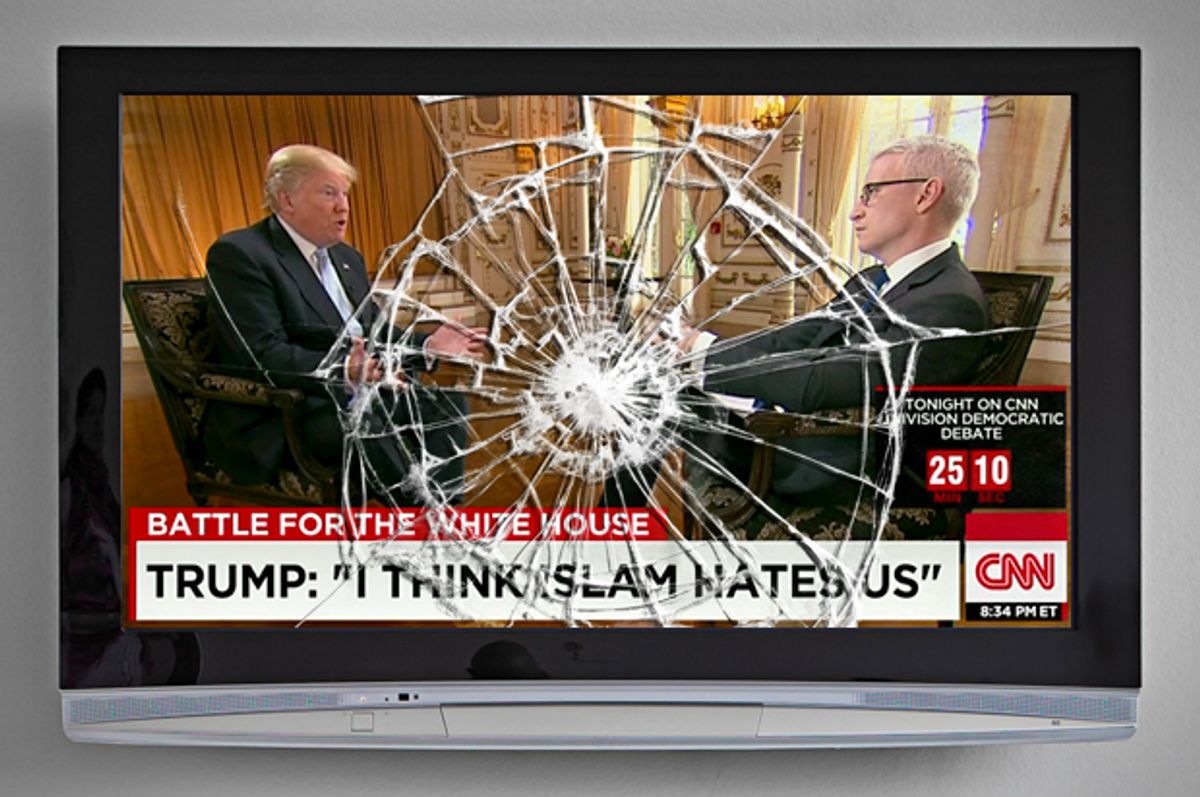 If Donald Trump didn’t constitute, in this year’s favorite word, an existential threat to American democracy, the contortions into which he has thrown the Republican Party, as they simultaneously try to thwart him while espousing his basic policies, would be hilarious.

On the other hand, the contortions into which he has thrown the media are less hilarious, because they ultimately have more bearing on the outcome of the presidential race. What Trump’s candidacy has managed to do is reveal fault lines in the media that usually are buried beneath the typical journalistic blather, the groupthink and the feigned objectivity of the mainstream media — and the reflexive lockstep partisanship in the right-wing media. (The liberals, with a pox on both Trump and his GOP rivals, get to sit this one out.)

Thanks to Trump, there are civil wars now erupting within the mainstream media between the business side and the editorial side, and within the right-wing media among the establishment Republicans, the populist renegades, and the so-called moderate, intellectual neoconservatives. What it really shows is just how craven, self-serving and self-involved our media are.

Let’s begin with the MSM. As I wrote here several weeks back, CBS head Les Moonves was mercenary enough to crow over how much money Trump coverage was pouring into his network’s coffers. Trump is a veritable gold mine, which is one reason why the media have given him so much free coverage — by one account $1.9 billion worth, which is nearly two-and-a-half times as much as the next highest candidate, Hillary Clinton, and more than five times as much as Bernie Sanders and Ted Cruz each.

In his inaugural column as the late David Carr’s successor, The New York Times’ new media maven, Jim Rutenberg, examined just how big a stake the media have in Trump — especially CNN, which was nearly on life support before Trump applied CPR. So far during this campaign, Rutenberg writes, CNN’s prime-time ratings have soared 170 percent, and CNN head Jeff Zucker boasted to Rutenberg that on debate nights the network gets $200,000 for a 30-second ad. This gives Trump a tremendous amount of leverage, and he isn’t afraid to use it to make sure he is treated respectfully. I can’t recall a situation in which a network was so dependent on a candidate. Usually, it’s the other way around.

CNN is so fawning to Trump it’s embarrassing, and its primary night coverage a disgrace. Sitting at desks are representatives for all the candidates, each given equal weight, with every Trump criticism parried by the Trump supporter, lest the network lose Trump’s favor. Anderson Cooper might as well be Trump’s apprentice for all the steely journalistic probing he gives him. But at least now you know how cable television news would have treated Hitler were it around in Germany back in the early ’30s. (Note to TV execs who still have a conscience, if any exist: Instead of out-of-work, old political operatives and partisan hacks giving us their tired takes on the primary results, why not have political scientists and historians do analysis? Just a thought.)

Yet amid the glut of Trump coverage, here is something that has gotten far too little attention in the media, for obvious reasons. According to Kyle Blaine at BuzzFeed, Trump not only gets uncritical coverage; he has actually negotiated with the networks as to how they shoot his rallies. If you want to know why the press is kept in a pen and not allowed to mingle at Trump events, it is, according to Blaine, because the press conceded that to Trump. They are not even allowed to provide cutaways of the crowd’s reaction. Again, I can’t recall the press ever capitulating to a candidate in this way, but, then, there was never a candidate who gave the press as much revenue as Trump. Nixon assiduously staged his events; he didn’t tell the press how it could cover them. In any case, can you imagine the howls of protest if the media agreed to the same sort of terms with Clinton or Sanders or even Cruz?

Trump coverage is the smoking gun and CNN is the corpse. And yet, again according to Kyle Blaine, there are some in the media who are actually discomfited by the surrender to Trump. As he puts it, “Conversations with more than a dozen reporters, producers, and executives across the major networks reveal internal tensions about the wall-to-wall coverage Trump has received and the degree to which the Republican frontrunner has — or hasn’t — been challenged on their air.”

But TV reporters are not likely to put their jobs on the line to take on Trump. In the mainstream print media, where the tensions between the public’s apparent desire for Trump news (and the desire of papers and magazines to satisfy it) and reporters’ disdain for him are in daily full view, there’s more of a full-blown war. The Washington Post, to cite one prominent example, runs dozens of Trump stories one after another, but just about every one of those stories is hostile.

Though one can only guess at motives, the difference between the generally lap-dog TV coverage (only this week did Chuck Todd finally demand that Trump no longer literally phone in his appearances on “Meet the Press”) and tougher newspaper coverage may reflect several things: that print journalism, as the late media analyst Neil Postman used to say, is more intellectually engaging than visual journalism; that TV has more at stake financially than print media and is thus more cautious in attacking its golden goose; and that print media feel a moral responsibility that TV doesn’t.

From the decades of insipid political reporting we have gotten in magazines and newspapers, you certainly wouldn’t guess that last one. But we never had a Trump before either — or, for that matter, a Ted Cruz — as a major party candidate. Some reporters, and a whole lot of pundits, evidently don’t want to take responsibility for sitting back and seeing him elected president.

Finally, for all the tensions between money and duty, and between irresponsibility and responsibility in the mainstream media, it is the conservative media that Trump has really discombobulated. Just look at Fox News, which is basically the propaganda arm of the Republican Party. On the one hand, you have the network lashing out at Trump and his “sick obsession” with Fox News’ Megyn Kelly, even though Trump has clearly boosted the ratings. On the other hand, you have Sean Hannity and Bill O’Reilly serving as major facilitators for Trump, and the network, by one count, mentioning Trump 25,000 times in the past month. Put another way, you have Ailes speaking for the GOP establishment, of which he is a member in good standing, and Hannity and O’Reilly speaking for — and to — the angry old white men who seem to comprise Trump’s supporters and the bulk of Fox’s viewers.

For an even more stark case of right-wing civil war, there is Breitbart, one of whose reporters was assaulted, allegedly by Trump’s own campaign manager, which led the Breitbart honchos to come to the defense of… Trump! Ah, those conservatives.

But perhaps the most interesting case of internecine media warfare is that of the “smart” neoconservatives against the GOP rank and file and the media that speak for them. These folks — the David Brookses, the Ross Douthats, the Michael Gersons, the David Frums — obviously hate Trump, maybe less for ideological or even political reasons than for personal ones. Trump’s brand of authoritarian populism is everything these intellectual conservatives have spent their careers telling folks that conservatism wasn’t — even though, truth to tell, there was always know-nothing Trumpism lurking within Republicanism.

I was especially taken by Ross Douthat’s column last weekend in which he fell back on the default position that the neoconservatives often invoke nostalgically: compassionate conservatism (as if!), the legacy of good old Jack Kemp, who was supposedly a softie when it came to poor people, and the lionization of House Speaker Paul Ryan, who, no doubt, all of them are praying will be the GOP presidential candidate at a contested convention. Gerson even wrote a piece in TheWashington Post this week conceding that, given Trump, a Hillary presidency wouldn’t be so bad as long as she had Ryan to spar with.

The media have always gone easy on Ryan, way too easy, treating him as if he were a real economic guru, when, in fact, no one who worships Ayn Rand as the prophet should be anywhere near government — or books. But the pining for Ryan in the “smart” right-wing media just goes to show how utterly baffled the right-wing press is.

Guys like Mitt Romney and Jeb Bush enabled them to indulge their fantasies of a smart, gentle conservatism that allegedly worked, never mind that the George W. Bush administration proved it didn’t. Now Donald Trump has blown up those fantasies, and the right-wing media are as confused as the right wing itself.

This piece was first published on BillMoyers.com