I'm a black woman; that doesn't mean I have a bomb in my hair

Being a black woman while flying has meant harassment: constant rummaging through my hair for nonexistent weapons 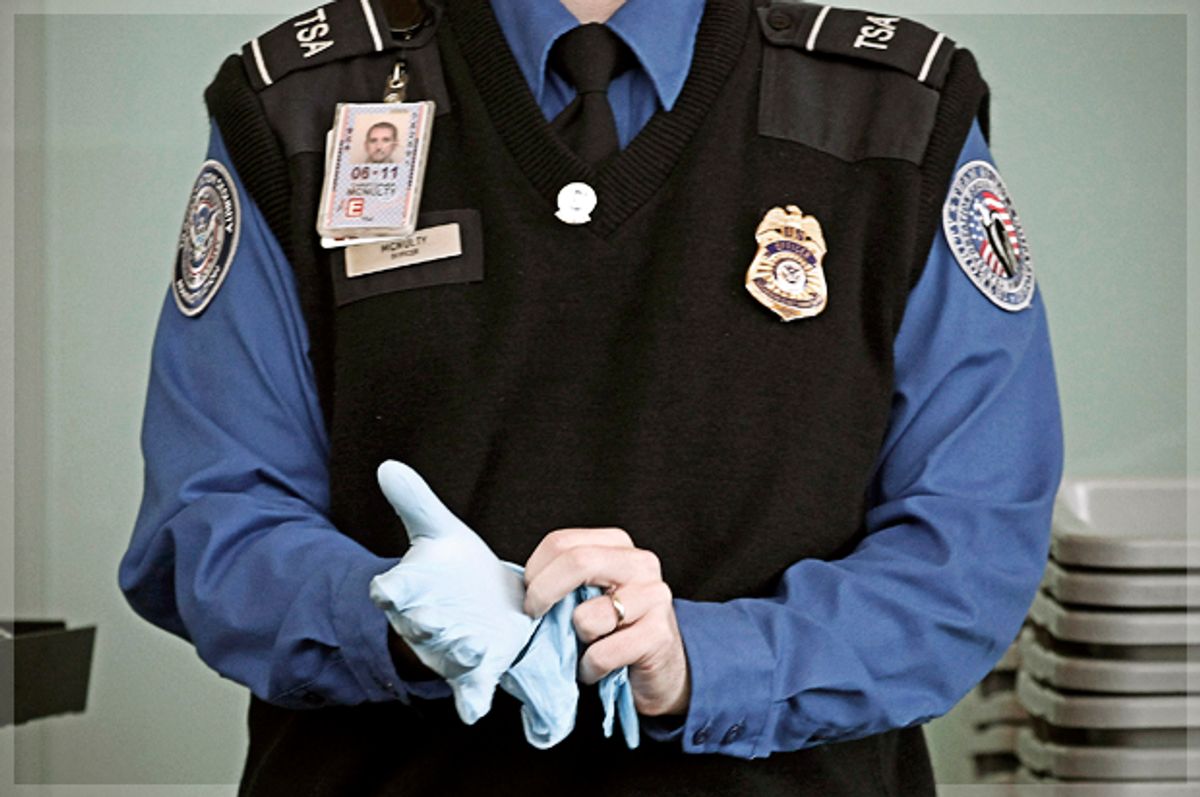 Following yet another awful terrorist attack, this one partially in an airport in Belgium, the topic of air-travel security and civil liberties is once again in the news. But my personal experience flying as a black woman shows we still have a long way to go in balancing security and the rights of individuals-- especially when those individuals aren't white.

I fly frequently. Between performances, workshops, retreats and conferences, I’m typically on a domestic flight at least once a month. So I am no stranger to TSA flight requirements. I take my laptop out of my bag and put it in a separate tray. Take off my shoes. Remove my belt. Empty my pockets. Throw out my water bottle. Pack liquids under 3.4 ounces. Then, I stand with my hands over my head for scanning. And while I do my best to comply with TSA rules and policies, I am always stopped. Always. Why? Because their scanning machine says my hair may be, or possess, a security threat. Sometimes they need to “just take a look” – so I stand still while they walk around me in a circle to get a closer look at my hair. Increasingly, a TSA agent will need to pat down my hair, rake their fingers through my tresses and squeeze my scalp. And, of course, the so-called “security threat” is never found.

My hair is a critical part of my self-expression, my artistic practice, a celebration of my heritage and my connection to spirit. So when TSA runs their dirty-ass latex gloves through my hair, it’s an insult. It’s racist. And it needs to stop.

A couple of months ago I headed to San Francisco from New York City for an annual Echoing Ida retreat. Unsurprisingly, but infuriatingly nonetheless, my hair needed to be inspected by a TSA agent at John F. Kennedy International (JFK) airport. I had had enough. Like many millennials, I took to social media to vent my frustration. When I landed on the West Coast, I opened my Facebook app to find that a bunch of my friends had commented, mostly black women. Many were outraged and others mentioned how they too go through this experience with TSA, wondering what we could do about it.  I tweeted at TSA and their related Twitter account @AskTSA. Given my recent encounter with TSA at JFK, I was surprised to find this tweet from them for #BlackHistoryMonth:

I’m curious (and skeptical) about what changes, if any, have resulted from these partnerships. And the response from @AskTSA about my concerns was nothing short of underwhelming:

The TSA’s current practice does little to respond to an agreement it made with  the American Civil Liberties Union of Northern California (ACLUNC) last year.

The agreement was reached after the ACLUNC filed an administrative complaint on behalf of Malaika Singleton, Ph.D. – a black woman with locs who experienced a hair pat-down after going through TSA scanning at Los Angeles International Airport (LAX) and again at Minneapolis International Airport (MSP) in December 2013. According to the agreement, TSA offered to ensure that “training related to nondiscrimination is clear and consistent for TSA's workforce” as well as specifically track hair pat-down complaints “from African-American females throughout the country to assess whether a discriminatory impact may be occurring at a specific TSA secured location.”

Armed with this information, I vowed that the next time one of these TSA agents tried to touch my hair, I would remind them about the ACLU agreement, take names and file a complaint. I didn’t have to wait very long. I had my opportunity on Sunday, March 13, at the Raleigh Durham International Airport (RDA) in North Carolina.

I was on my way home after attending and providing healing services at the BYP100 National Membership Convening. As usual, TSA needed to check my hair after scanning. I respectfully said no. When the TSA agent told me it was required, I asked for her supervisor. (Ironically, while I’m waiting, another TSA agent compliments me on my hair.) When her supervisor arrived, she said I had two options: 1) get my hair patted down where I was standing or 2) get my hair patted down in a private room. My heart was pounding. My ears were hot. I was steaming mad. It took everything I had to keep my composure. Despite my anger, I calmly explained: “I don’t want my hair touched. Every time I go through TSA security I get stopped for my hair, and other black women experience this too.” The agent replied, "It’s not just black women; Latina and Asian women get this treatment as well." She said that if I refused, I would not be able to board my plane. It was 20 minutes until boarding and I didn’t want to miss my flight. After taking her name and letting her know that I would be filing a complaint, I “allowed” (can I even call it that?) a TSA agent to pat my hair down, only after I instructed her to change her latex gloves. She squeezed my bun, raked through my scalp. And what did she find? Nothing. What a surprise.

Being a black woman while flying has meant harassment: consistent and constant rummaging through my hair searching for nonexistent threats and weapons. I understand that in a post-9/11 era there is a desire to be cautious -- especially given the most recent terrorist attacks in Paris and Brussels. I too desire safety and security; however, I am not convinced that my hair is deserving of so much suspicion. While the rare instance of hair smuggling is not completely unheard of, there have to be solutions to this security query that don't involve a breach of civil liberties, racial profiling and humiliating pat-downs.

There are no bombs in my bun. Ain’t no weapons of mass destruction tangled in my fro-hawk. I’m not smuggling drugs in my braids. No firearms are concealed in my pinned-up pompadour. No hidden weapons under my headwrap. I promise not to use my bobby pins to stab anyone. Nor will I use my head scarf to choke passengers. My twist-outs are harmless. My high ponytail will not kill you. My black kinky hair in all of its styles (trust, there are many) does not compromise homeland security.

My hair is my crown and glory. Raised by a single mother who had a hectic schedule, I became responsible for doing my hair at the tender age of 9. So you know I take my hair seriously. I’ve done every hairdo under the sun: from bobs to bangs, Aailyah swoops to the T-Boz “Crazy Sexy Cool” cut. Short and long. A full head of hair and a frohawk. Perms, weave and natural. The list goes on. My hair is a big part of who I am. That the TSA is ill-equipped to deal with it in a routine and non-invasive manner is symptomatic of systemic racism.

And I’m not the only black woman going through this. Melissa Harris-Perry, Solange Knowles and other, less famous black women experience this degradation every day. And the problem isn’t with TSA alone. TSA operates alongside a number of institutions within a framework of white supremacy that are both fascinated and threatened by what black women do with our hair and heads. In February a school administrator at a high school in Durham, North Carolina, told young black girl students to remove their West-African inspired head wraps because it violated school dress code. Black women in the workplace have been discriminated against for rocking natural hair in general and braids in particular, including Renee Rodgers, who filed a lawsuit (and lost) against American Airlines in 1981 because she was told that her cornrows violated the company’s grooming policy. And this is not just specific to corporate America -- the U.S. military made it a point to explicitly state that black hairstyles were unauthorized.

Although racial references may not be explicitly stated in their policies, the practices of implementing TSA policy is having a racist impact. It should be noted that not all agents who pat down hair are white. My most recent experience involved two black women TSA agents. But to be clear: that is how systemic racism works – it’s not just about the racial identity of the TSA agents implementing these dubious practices; it's about the races that are disproportionately and unfairly impacted by the practices of TSA.

More importantly, this isn’t just about TSA agents. Their technology is questionable and ineffective. As Melissa Harris Perry eloquently stated: “If your $170,000 machine can see under my clothes, but can’t figure out I’m not hiding a bomb in my braids, maybe it’s time to recalibrate the machine.” It seems logical but may not be a reality anytime soon. “We initially asked TSA to audit the scanner triggering false positives for African American hair specifically” said Novella Coleman, an ACLUNC staff attorney who worked on the TSA agreement. “TSA was unwilling to take a look at that.”

In her article "The Politics of Black Women’s Hair: Why It’s Seen with Skepticism and the Need to Discipline," Brittney Cooper says “there is a long history of institutions regulating bodies in such a way that white bodies become the norm.” Indeed. So when TSA says they do not engage in discriminatory practices, they only check hair with “anomalies,” it is clear that what is outside of the norm is black hair.

Taja Lindley is a Brooklyn-based writer, artist and founder of Colored Girls Hustle. She is also a member of Echoing Ida - a collective of Black women writers and project of Forward Together. @tajalindley