The clip of Hillary arguing with a protester is somehow the biggest climate story of 2016. The media must do better 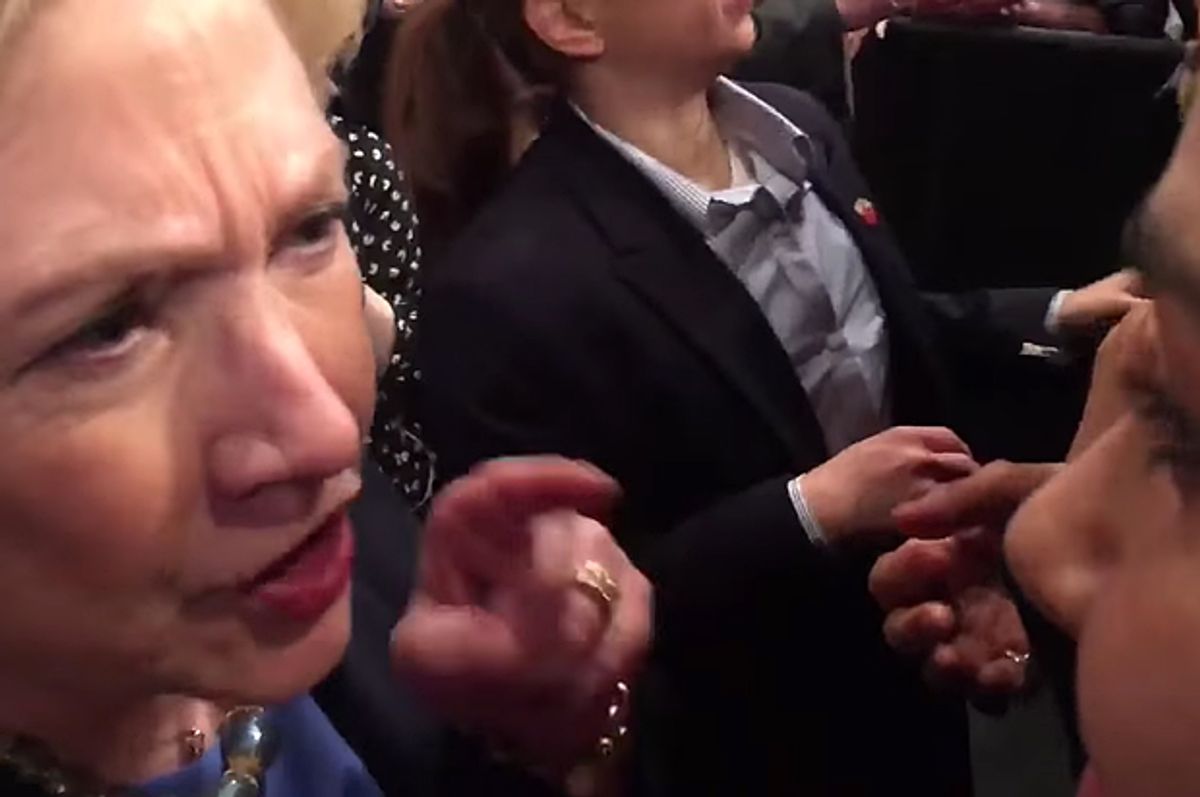 Hey, did you hear the one about how the planet is dying quickly and we're probably all doomed?

It's true! Just this past week, the world got a fun update about just how much danger we're in thanks to climate change. This one came courtesy of the West Antarctic ice sheet, which is, well, a giant sheet of ice in Antarctica and which is potentially disintegrating at a pace that, in the words of the New York Times, could help send sea levels rising enough to cause "a profound crisis within the lifetimes of children being born today."

That seems like kind of a big deal, right? It kind of puts all of the more immediate fights we're having in an ominous perspective, no? It's the sort of topic you might expect, say, a presidential campaign to be taking more seriously, wouldn't you think?

Forgive the heavy sarcasm. Anyone who's been watching the 2016 race will know that climate change has taken the furthest of backseats to a host of other issues. It got an indirect injection into the whirl of the campaign on Thursday, when Hillary Clinton angrily accused Bernie Sanders of lying about the money she's getting from members of the fossil fuel industry. (She wasn't quite telling the truth in that moment, by the way.) Candidates accusing each other of lying—now that is something the political media can get behind! Summaries of the back-and-forth duly popped up everywhere. Politico even got around to mentioning Clinton's record on environmental issues—in the last couple of paragraphs of its story. Besides that, any extensive discussion of climate change has been very difficult to find. The lack of attention paid to it at presidential debates has become something of a running joke.

This is all, to put it mildly, insane. At a certain point in this century, the rapid demise of the earth is going to be a problem that is much too difficult and dangerous to ignore. Alarm bells are everywhere—in frequent reports of record-breaking temperatures (it was just 71 degrees in Alaska!); in studies predicting the possibility of sudden, vast chaos and ruin; in pleas with the world to move even more aggressively to combat climate change than it has. The world has no wiggle room. Everyone needed to be freaking out at maximum speed a long time ago.

It would be too much, I suppose, to ask Republicans to discuss climate change with any seriousness, since they won't even admit it exists. But Bernie Sanders and Hillary Clinton have real, substantive differences in how they propose to handle the issue. There is much to debate between the two of them. They should be made to do it more often! More broadly, they should be made to answer bigger questions about climate change. Do they think that our modern global economy is really sustainable in its current form, given that it is almost certainly escalating the threat of climate change? What should American agricultural policy, which both affects and is affected by climate change, look like going forward? How can the relative pittance being given to poor nations that have contributed relatively nothing to climate change but will bear the brunt of its damage be justified?

And as for those Republicans: Shouldn't it be a bigger deal that an entire political party has its head in the sand about an apocalyptic tsunami of death and destruction barreling down on the entire planet? A lot of people are going to be killed because of climate change. Wars will be fought.  Cities are going to disappear. Whole islands are going to sink into the ocean. If presidential candidates said ISIS wasn't real, there would be an uproar, but saying climate change doesn't exist is somehow never deemed to be that important or significant a betrayal of reality.

The consequences of such indifference are easy to predict. If climate change isn't pushed to the top of the agenda, there won't be pressure on whoever becomes president to do anything further about it, and if that president doesn't, then we'll all pay an even higher price than we're all already going to pay. So, you know, maybe we could make climate change more of a thing in 2016, please?