Donald Trump's big f*ck you: This is what Trump and Ted Cruz are really saying to women when they talk abortion

Trump's attempts to distance from “punishment” instead liken women to children, incapable of adult responsibility 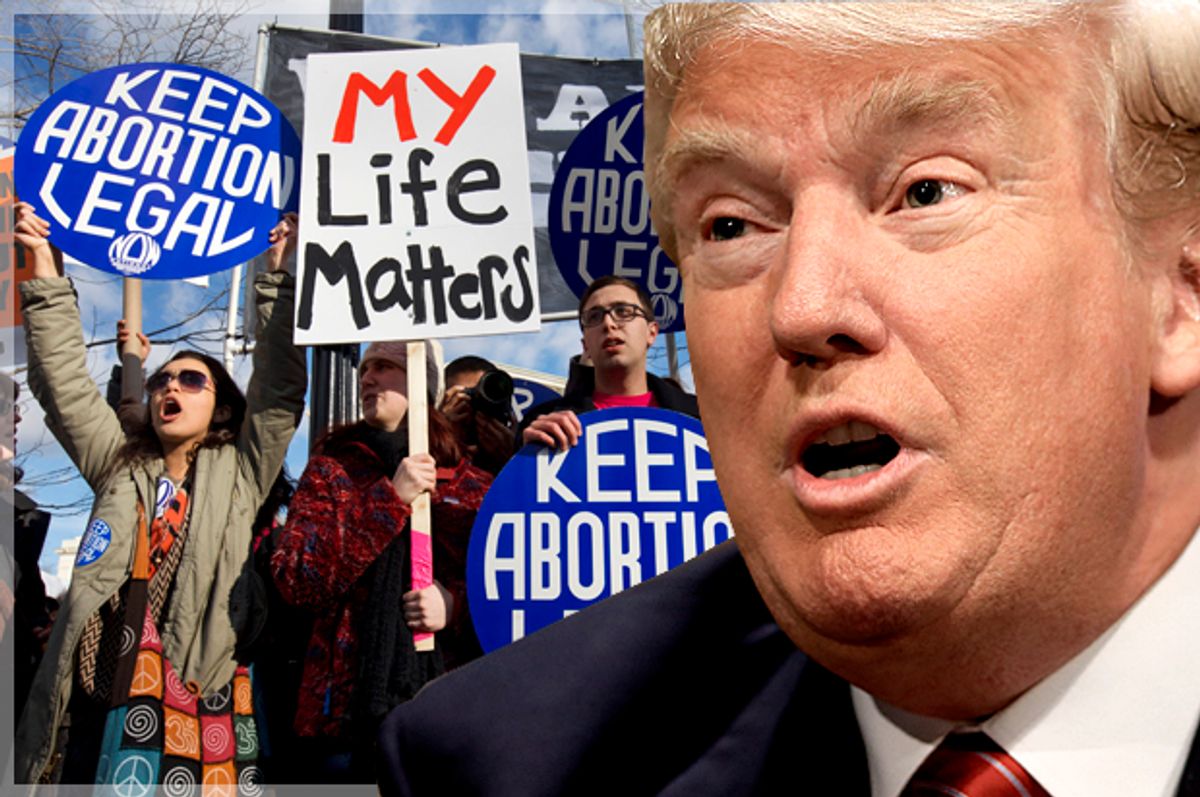 If Donald Trump’s comment about punishing women for abortions exposed the bloated belly of the Pro-Life Priesthood, his retraction exposed its sulfur-spewing rear end.

In his inimitable way, Trump managed to follow conservative rhetoric to its logical conclusion. If abortion is murder and murderers deserve to be punished, then almost a third of American women should be treated like felons. When Trump said as much, Ted Cruz and likeminded Bible-quoting fetus fetishists freaked out for a very good reason: The Cruzes and the Rubios of the world don’t want Americans to think about where their talking points and policies ultimately lead. Most people, including Republicans, don’t believe their daughter or sister or mother is a murderer; and they don’t really want her treated like one. Most Americans, including Christians, can tell the difference between an embryo and a child. They are capable of grasping both biological evolution and moral nuance. Punishing women does not resonate.

But to say that women are victims of abortion, implies an even uglier attitude toward females, one with implications that go far, far beyond abortion.

The Christian Right wants to thread a bent needle. They want to argue that if a woman goes to a doctor to get an abortion, the doctor is a criminal and the woman is not—even after signing informed consent paperwork, being subjected to a forced vaginal ultrasound, and returning to the clinic two or three times to get the procedure done. What does that say about us?

Let me put on my Trump hat and spell it out: Women are like little children or people who are mentally impaired and can’t legally be held responsible for their “decisions” or actions.

If you feel yourself bristling, Don’t you worry your pretty little head about this. Daddy knows best. Let go and let God. (Man is made in the image of God.) He will provide. A woman’s place is in the home; Barefoot and pregnant in the kitchen. Come on, even the Bible says that God put men in charge, that a woman’s glory is her hair—Muhammad got that one right—and women will be saved by childbearing! No sense of humor? You’re so cute when you’re angry.

Since the whole rhetorical game depends on people not thinking about what’s being implied, let me spell out another way that Trump’s retraction and the whole woman-as-victim thing stinks like a sulfur vent.

Woman-as-victim rhetoric proclaims the innocence of women seeking abortions while portraying abortion providers as predators. It denies the huge heart of compassion and moral determination that leads a person like doctor Willie Parker or clinic owner Amy Hagstrom Miller or counselor Charlotte Taft to get up in the morning and walk a gauntlet of protesters who are waving rosaries and dead baby pictures and yelling about hell, despite lies and denigration and bogus regulations and death threats and colleagues slain.

In extending this offer, they are betting on another bundle of stereotypes: women are fickle, women are faithless, women can be bought with cheap baubles.

Too Dumb to Notice the Fake

And adding injury to insult, “Pro-Lifers” are letting women know that whether we are white or brown or “exotic,” with kinky hair or curly or straight, to them we’re all dumb blondes who won’t notice a rather important con: The get-out-of-jail card is fake.  If our doctors and nurses are murderers we are at minimum accomplices, and so are the partners who make the abortion decision with us, and so are all of the family members and friends who provide wise counsel instead of calling the police.

So, to Trump and company, I say this: Call us murderers if you want, but you’ll have to call us all murderers. Don’t think you can divide Americans by painting women as victims. You may believe your own insipid stereotypes, but we know better. We know our own minds and hearts and dreams and goals and loves and loyalties. And they are formidable.