Congressman voices concerns about Saudi death sentences in letter, after monarchy has executed 82 people this year 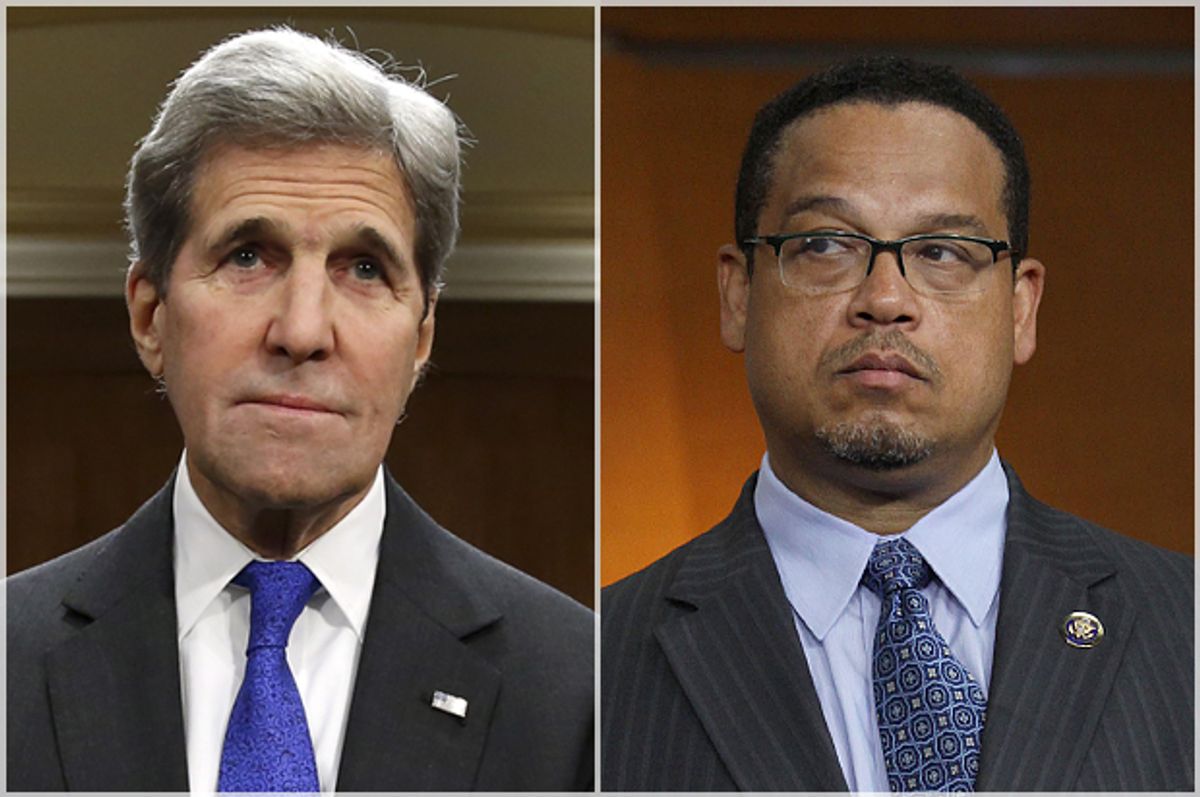 Rep. Keith Ellison is calling on the federal government to pressure its close ally Saudi Arabia to pardon three young activists who were sentenced to death for attending protests.

Rep. Ellison (D-Minnesota) wrote a letter to Secretary of State John Kerry on April 1. In the letter, which was obtained by Salon, Ellison requested Kerry's "direct intervention to ensure the protection of three juveniles sentenced to death for protesting in the Kingdom of Saudi Arabia."

Ali al-Nimr, Dawood al-Marhoon and Abdullah al-Zaher were arrested for attending peaceful political protests while they were aged 17, 17 and 15, respectively.

The Saudi youths were subsequently tortured, and forced to sign confessions, a common practice in the Saudi criminal justice system. Eventually, all three were sentenced to death. Al-Nimr was sentenced to not just beheading, but also to crucifixion.

News reports indicate that Saudi Arabia may execute the young men at any time. Their families are not able to stay in contact with them, and only hear updates on their cases through media reports.

"Many of the individuals sentenced to death alongside Ali, Dawood and Abdullah have already been executed, including a number of juveniles aged between 13 and 17 at the time of their arrest," Rep. Ellison noted in his letter.

"This includes one of the boys’ co-defendants, Mi al-Ribh, who was just 17 at the time of his arrest," he continued. "His family was only notified of their son’s execution when the Saudi Ministry of the Interior published the mass execution. To date, they have not been informed where their son is buried, nor have they been permitted to retrieve his body."

Ellison's office did not offer any further remarks, as the congressman is traveling.

Salon spoke with Mohammed al-Nimr, the son of the executed dissident, who criticized the close U.S. relationship with the Saudi dictatorship.

Saudi Arabia frequently executes people for nonviolent offenses. Beheadings are the most common form of execution.

In 2015, Saudi Arabia broke previous records, executing 158 people. Roughly half of people executed in Saudi Arabia are killed for drug-related offenses, according to Amnesty International.

From August 2014 to August 2015, Amnesty documented 175 Saudi executions, an average of one every two days. Every four days, on average, the Saudi government killed someone for drug-related offenses — while its own princes are caught in airports with tons of drugs.

This year is again slated to break past records. As of April 4, the Saudi regime has executed 82 people in 2016, according to human rights organization Reprieve. If the current rate is maintained, Saudi Arabia will execute 320 prisoners this year.

"As Saudi Arabia looks set for yet another record-breaking year of beheadings, it is more important than ever that its allies in the U.K., Europe and the U.S. call for it to stop," said Maya Foa, director of the death penalty team at Reprieve, in a statement.

"The deep injustices of the Saudi system mean that those being sent to the swordsman’s blade are in many cases tortured into ‘confessing,’ guilty of nothing more than calling peacefully for reform, or even sentenced to death as children."

Foa added, "The U.K. and U.S. must immediately call for Ali, Dawoud and Abdullah’s sentences to be commuted before it is too late — given the rising tide of beheadings, vague reassurances are not enough."

The U.S., the U.K., France and other Western countries consider Saudi Arabia a close ally. It sits on the world’s second-largest oil reserves and has done more than $100 billion in weapons deals with Western governments in the past several years.

Critics compare the theocratic Saudi absolute monarchy’s religious extremism to that of groups like ISIS. The Saudi monarchy has spent more than $100 billion spreading its fundamentalist Wahhabi interpretation of Islam around the world.

In November, the Saudi regime sentenced Palestinian poet Ashraf Fayadh to death for criticizing the royal family and “renouncing Islam.” On March 24, the close U.S. ally sentenced prominent journalist Alaa Brinji to five years in prison for a series of tweets expressing support for women's rights and human rights activists.

The imprisoned journalist was convicted in Saudi Arabia's so-called Specialized Criminal Court, where people are frequently sentenced "for offenses related to ‘terrorism,’ though the evidence against them rarely amounted to more than a confession gained through prolonged torture," Rep. Ellison noted in his letter.

"The United States must protest and oppose the execution of minors arrested after pro-democracy protests and convicted by a court with questionable legal standards," the congressman stressed.

He asked Sec. Kerry "to personally intervene to stop any move by the Saudi government to execute these young men, and to request a permanent commute of their death sentences."

Ellison is the co-chair of the Congressional Progressive Caucus. He is also the first Muslim to be elected to the U.S. Congress, as well as the first black American elected to the House from Minnesota.

Reprieve and peace group CODEPINK, both of which actively speak out about Saudi human rights violations, urged Rep. Ellison to voice concern about the pending executions.

CODEPINK has created two petitions calling for the death sentences to be halted. One urges Saudi Ambassador to the U.S. Abdullah bin Faisal "to immediately halt the executions of these youth and establish an official moratorium on all executions with a view to abolishing the death penalty in Saudi Arabia."

The other petition calls "on the leading Presidential candidates to commit to imposing sanctions against the Saudi government for their human rights abuses and to re-examine the toxic U.S.-Saudi relationship once they are in office."

In March, CODEPINK held the 2016 Summit on Saudi Arabia, the first event of its kind to call into question U.S. ties with the theocratic Saudi absolute monarchy.