This is how the FBI destroys Hillary: The 10 questions that could end her White House dreams

These questions, if answered honestly, would most likely hand the Democratic nomination to Bernie Sanders 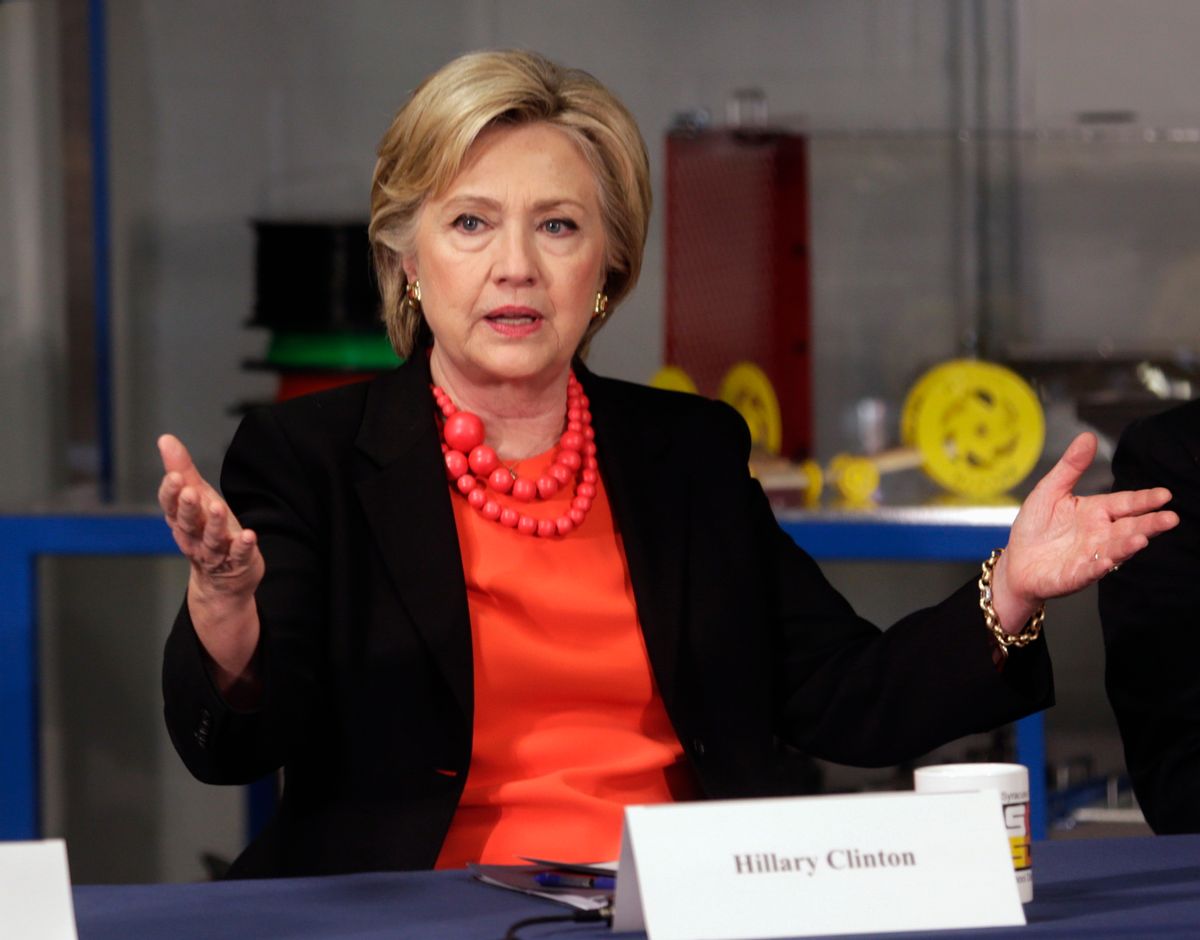 The FBI’s upcoming interview of Hillary Clinton will be a turning point in the race for Democratic nominee, especially since Clinton won’t be able to speak to James Comey and his FBI agents in the same manner her campaign has communicated with the public. Unlike loyal Hillary supporters who view the marathon Benghazi hearings to be a badge of courage and countless prior scandals to be examples of exoneration, the FBI didn’t spend one year (investigating this email controversy) to give Clinton or her top aides parking tickets. They mean business, and lying to an FBI agent is a felony, so Hillary Clinton and her aides will be forced to tell the truth. The doublespeak involving convenience and retroactive classification won’t matter to seasoned FBI agents whose reputations are on the line; the entire country feels there’s a double-standard regarding this email controversy.

Imagine if you had 22 Top Secret emails on your computer?

Would you be able to claim negligence?

Also, the issue of negligence is a canard. Clinton and her top aides were smart enough to understand protocol. For every legal scholar saying that indictment isn’t likely (because it’s difficult to prove Clinton “knowingly” sent or received classified intelligence), there’s a former attorney general and former intelligence officials saying that indictment is justified.

Ultimately, every question asked of Hillary Clinton by James Comey will benefit the Sanders campaign. In a battle for the soul of the Democratic Party, one candidate is being investigated by the FBI and has negative favorability ratings in ten national polls. The other candidate, Bernie Sanders, just raised more money in February than Clinton, without the help of Wall Street or oil and gas lobbyists. If Clinton gets indicted, the Democratic establishment and superdelegates will have no choice but to rally around Bernie Sanders.

I explain three possible scenarios in my latest YouTube segment regarding how the Clinton campaign would react to the reality of indictment. No doubt, certain supporters would still vote for Clinton, even with the possibility of criminal behavior.

In reality, Bernie Sanders is the true front-runner, since he’s free of perpetual scandal and performs better against Trump in general election. Vermont’s Senator also isn’t linked to an FBI investigation, which used to mean automatic front-runner status in American politics.

Therefore, below are ten questions the FBI should ask Clinton and her top aides. These questions, if answered honestly, will most likely hand the Democratic nomination to Bernie Sanders. Remember, the issue of convenience or negligence won’t be enough to circumvent repercussions from owning a private server as Secretary of State. FBI director James Comey and his agents aren’t Democratic superdelegates or beholden in any way to a political machine. They’ll demand answers to tough questions and below could be some of the topics discussed in Clinton’s FBI interview.

1. What was the political utility in owning a private server and never using a State.gov email address?

There was a political motive in circumventing U.S. government servers and networks. Clinton didn’t go to the trouble of owning a private server (something her predecessors never did) for work and private use, without thinking of the political ramifications.

The issue immediately at hand — and under investigation by the FBI — is Clinton’s use of a private email server for State Department communications. Clinton may have violated national security laws by making top secret documents vulnerable to hackers and available to people without proper security clearance...

In addition, regardless of Clinton’s excuses, the only believable reason for the private server in her basement was to keep her emails out of the public eye by willfully avoiding freedom of information laws. No president, no secretary of state, no public official at any level is above the law. She chose to ignore it, and must face the consequences...

And donations to the foundation from foreign governments have raised conflict of interest questions for Clinton as secretary of state, an office with power over foreign affairs and favors second only to the president’s.

As stated in the Milwaukee Journal Sentinel, “the only believable reason for the private server in her basement was to keep her emails out of the public eye by willfully avoiding freedom of information laws.”

We can’t even see Hillary Clinton’s Goldman Sachs speeches, do you think Clinton wanted the public to know information about her foundation?

According to ABC News, Clinton’s staff had an amusing way of deciphering how to delete over 30,000 emails:

A Time magazine cover story about the email scandal released last week reported: “This review did not involve opening and reading each email. Instead, Clinton’s lawyers created a list of names and keywords related to her work and searched for those. Slightly more than half the total cache — 31,830 emails — did not contain any of the search terms, according to Clinton’s staff, so they were deemed to be ‘private, personal records.’”

There was no government oversight, therefore the FBI has every right to ask why Clinton’s staff was allowed to pick and choose (through keyword searches) private emails from others that could have contained classified intelligence.

3. Why didn’t you know that intelligence could be retroactively classified?

This leads to the issue of negligence; a zero-sum proposition. Either Clinton wasn’t smart enough to know protocol, or breached protocol. Both scenarios aren’t good for a future presidency. Both scenarios won’t prevent legal repercussions, given the 22 Top Secret emails.

4. Why did you use a Blackberry that wasn’t approved by the NSA?

A month later, she began using private email accounts accessed through her BlackBerry to exchange messages with her top aides.

“We began examining options for (Secretary Clinton) with respect to secure ‘BlackBerry-like’ communications,” wrote Donald R. Reid, the department’s assistant director for security infrastructure.
“The current state of the art is not too user friendly, has no infrastructure at State, and is very expensive.”

Standard smartphones are not allowed into areas designated as approved for the handling of classified information...

Clinton used a Blackberry that wasn’t approved by the NSA. Along with the issue of political motive, and why she deleted tens of thousands of emails, the unsecured Blackberry use could easily lead to an indictment.

5. What did you say to Bryan Pagliano?

Mr. Pagliano recently received immunity. He’s told the FBI, most likely, about his conversations with Hillary Clinton. Any discrepancy in stories could lead to a felony charge for Hillary Clinton or Pagliano’s immunity to be revoked. Both have every incentive to tell the truth.

6. Why were 22 Top Secret emails on a private server?

This is a simple question with no logical answer circumventing political repercussions. If Clinton and her staff are able to evade this issue, future government officials will also be able to have Top Secret intelligence on unguarded private servers.

7. Was any information about the Clinton Foundation mingled with State Department documents?

The answer to this question could lead to hundreds of other questions.

8. Did President Obama or his staff express any reservations about your private server?

President Obama’s White House communicated with Clinton via her private server. If anyone in the White House said anything about Clinton’s server, this could lead to new controversy.

9. Did Bill Clinton send or receive any emails on your private network?

The server was located in their home, so it’s a valid question.

10. How was your private server guarded against hacking attempts?

These questions could easily give Bernie Sanders the nomination. I explain that Clinton faces possible DOJ indictment in the following appearance on CNN International. Although Bernie can win without Clinton’s indictment, the email controversy will most likely become a giant story very soon. With issues revolving around trustworthiness before the FBI interviews, Clinton won’t be able to prevent Bernie Sanders from winning the Democratic nomination in 2016.