This war is for America's soul: Donald Trump, Paul Ryan and how wealthy white elites protect themselves

It's the elites vs the people in this presidential campaign, and nothing less than democracy is at stake 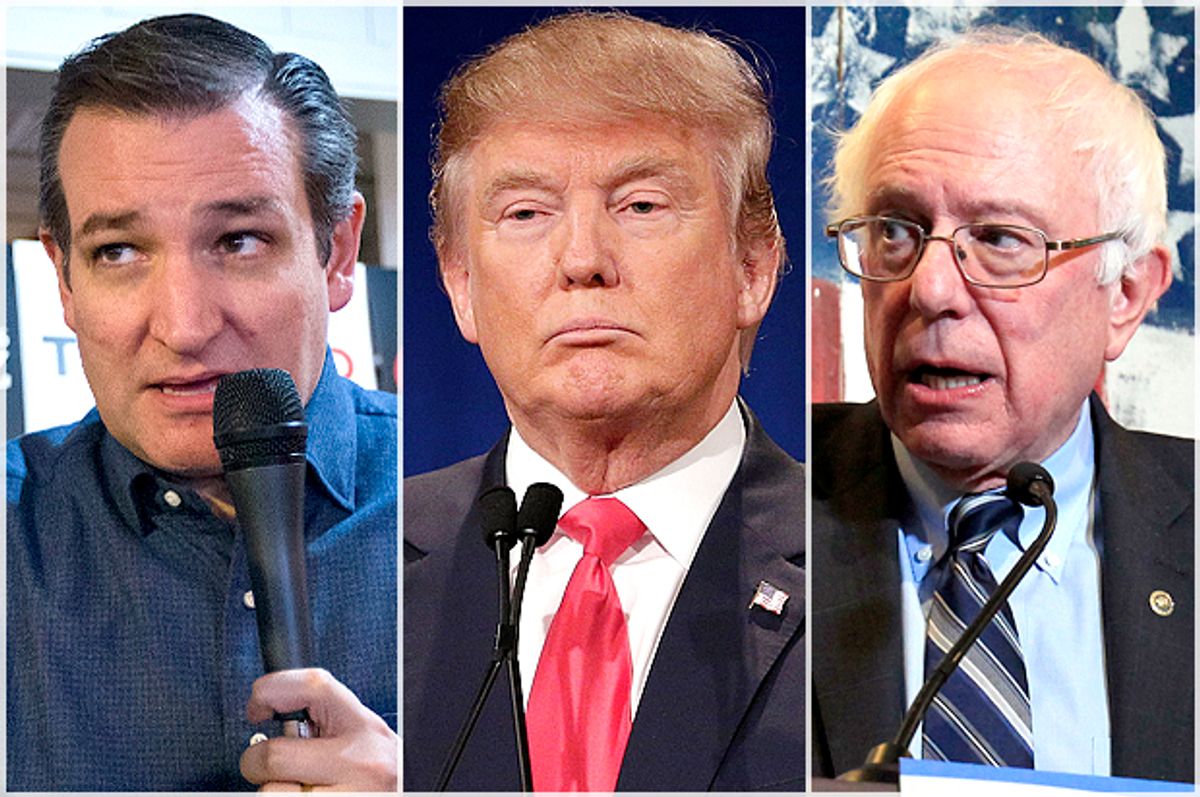 Today’s political crisis is the latest phase of a conflict that began a century and a half ago. The fight is over two fundamentally different ideas about the nature of America. On one side are those who believe that that every hardworking person should be able to rise. On the other are those who believe that wealthy white men should always rule over a permanent class of workers.

This fight was bred into the nation’s DNA when the Declaration of Independence promised equality of opportunity but the Constitution defended property. It did not break into the open, though, until the 1850s, when wealthy southern leaders felt their control of the government slipping. To protect their authority, they articulated, and then defended, a class-based vision of a nation dominated by a wealthy elite.

They lost the Civil War, but their vision did not disappear. It is now the driving force among Republican leaders.

When Paul Ryan talks about “makers and takers,” National Review denigrates minorities and poor whites, and Republican legislatures suppress the vote, they are echoing the ideas, the language, and the actions of Civil War-era slave owners.

Like today’s Republicans, slaveholders advanced the elitist version of America when they realized that they no longer controlled a majority of the popular vote. They were accustomed to using the government to advance their own interests, and had no intention of permitting their domination of the country to erode. To entrench their authority, they glorified their culture, rewrote American history, manipulated the laws, and tried to override the popular will. Republicans today are in the same predicament, and they are using the same formula.

The contours of the 1850s looked much like those of the present. Then, as now, a small group of extraordinarily rich men—in each case about 1% of the population—dominated the nation’s political system. But then, as now, they knew that their power was tottering. The economic systems that had made them fabulously wealthy offered little to other Americans. In the 1850s, plantation agriculture, which depended on slave labor, enabled big planters to get ever richer, but squeezed poorer southern white men off productive lands and threatened to sink small northern farmers who had higher production costs. Now, of course, “supply-side” economics has concentrated wealth upward dramatically since 1980.

But in both eras, there came a point when rule by elites came under siege. In the 1850s, as the numbers of Americans who were not invested in the slave system grew, the South’s leaders felt they had to entrench their power in the government or it was only a question of time until lawmakers would begin to regulate, or even outlaw, slavery. So slaveholders went on a full out assault to promote their worldview. They insisted that an economy based on slavery was America’s traditional system. It was blessed by the Founding Fathers; it was economically brilliant; and it was God’s own plan. Only white leaders had the brains, the education, the experience, the social ties, and the money to make good decisions about the economy and society. They must direct the labor of the dull people who did the hard work of producing the goods that supported the economy. These “mudsills” were important as workers; it was the capital produced by their labor that permitted elites to move the culture and civilization forward. The extraordinary wealth of the cotton kings proved that this system was the right system for America, and for the world. Clearly, God had indicated his favor for the elites by making them so wealthy.

In the 1850s, slave owners explained that a healthy economy, and thus a healthy nation, depended on keeping poorer men from having a say in the government. If members of the lower classes were allowed to vote, they would insist on having a greater share of the wealth they produced. They would demand legislation to make it easier for them to rise: new roads, for example, or schools. Those could only be paid for with taxes, and those taxes would primarily hit the wealthy. Capital would be “redistributed” downward. Elite leaders would no longer be able to afford to devote their time to improving society. Progress would stall. The nation would collapse.

When poor southern whites started to bridle at this system, slaveholders shored up their loyalty by harping on the racial inferiority of black slaves. Slaves were lazy and stupid, they warned, but dangerous all the same. White people depended on slavery to keep black people in check, even if it meant they had to accept a political and economic system that created a rich class of slaveholders who took poor men’s land and squeezed them out of the cotton economy.

This should sound familiar. Today, as it has become increasingly clear that the modern economy is not serving everyone well, a similar line of argument has emerged. Presidential candidate Mitt Romney and House Speaker Paul Ryan talked vaguely about “makers and takers,” but Republican leaders lately have been more explicit. Journalist and pundit Josh Barro tweeted in December 2013 that “Elites are usually elite for good reason, and tend to have better judgment than the average person.” The flip side of elites deserving their success is that poor people deserve failure. Republicans have poured vitriol on minority populations since Reagan’s Welfare Queen, but in March, National Review’s Kevin Williamson turned on poor white people. It was not the dramatic tilting of the economic scales toward the rich after 1980 that hurt poor whites, he writes, “They failed themselves.” They are dependent on welfare, addicted to drugs and alcohol, have no family stability, and “whelp… human children with all the respect and wisdom of a stray dog."

Today, just as in the 1850s, leaders insist that these mudsills should not be permitted to have a say in society, for they want government to redistribute the wealth of their betters to them through social welfare legislation. Romney claimed that 47% of the American people “are dependent upon government… believe that they are victims… believe the government has a responsibility to care for them… believe that they are entitled to health care, to food, to housing, to you-name-it -- that that's an entitlement. And the government should give it to them.” Former Republican senator Rick Santorum put it more clearly: “I don’t want to make black people’s lives better by giving them someone else’s money.” More recently, anti-government activist Cliven Bundy went further when he described the black people who lived in a public housing project: “They were basically on government subsidy, so… they abort their children, they put they young men in jail, because they never learned how to pick cotton…. Are they better off as slaves, picking cotton and having a family life and doing things or are they better off under government subsidy?”

In the 1850s, slaveholders insisted that, rather than facilitating such a destructive redistribution of wealth, the government must limit its actions to protecting property. This meant that it must stay in the hands of the elites. Slaves were excluded from the vote, of course, but southern leaders also tried to exclude poor white men. American democracy meant only that poor men got to choose which leaders they wanted, slave owner James Henry Hammond told the Senate in 1858. They could not actually change the nature of government to make it respond to the popular will. He warned wealthy northerners that they, too, should be careful to keep poor voters in check.

This sounds perilously like the manipulation of the vote today by Republican legislatures and courts. Since the 2000 election, when victory came down to a few contested votes, Republican leaders have hammered on the idea that “voter fraud” must be stopped. In fact, it is well established that this so extraordinarily rare it is virtually non-existent. But to fix this non-problem, 33 state legislatures have enacted voter ID laws since 2000; the laws of three more have been struck down. These laws reduce voting primarily by minorities, women, and the elderly, populations, of course, that tend to support social welfare programs. In 2013, the Supreme Court went one better by drawing the teeth of the Voting Rights Act, passed originally in 1965 to protect minority voting. This so threatens to undermine faith in the government that on Friday even a Republican congressman had to cry foul.

Even if all Americans could vote freely, the gerrymandering that took place after the 2010 census meant that Republicans could hold the House even without a majority. Republican donors poured money into state campaigns in 2010 with the express purpose of enabling Republicans to redraw state districts, and it worked. In 2012, House Democratic candidates won 1.37 million more votes than Republicans candidates did, but took only 201 seats. The Republicans took 237.

Also in 2010, the Supreme Court’s decision in the Citizen’s United case guaranteed that elites can contribute their money freely to have disproportionate influence on elections.

If you believe that wealthy leaders are only ones who can know what is best for the country, their domination of the political system is right and proper. To the extent that what they do is unpopular, it is only because, as slaveholders argued a century and a half ago, that regular people are too dull to know their own interests. As Republican Governor Pat McCrory of North Carolina said this week in response to the protests over the extraordinary law the legislature rushed through in twelve hours in special session, the outcry is only because the media is misrepresenting the law and thus the people are misguided. (It is worth noting that the law not only revokes local statutes that protect LGBT people; it also prohibits cities and towns from raising the local minimum wage.)

In the 1850s, the growing power of elite slave holders over the government horrified Americans who believed that the nation stood not for the protection of a wealthy elite, but for equality of opportunity. They believed that even people who started off life poor should be able to work their way up to prosperity. Once there, they should enjoy no less status and power than the wealthy southerners who had been born into the upper class. Men like Abraham Lincoln recognized that if the slaveholders were not stopped, it would only be a question of time until they spread their system of elite rule to the entire country. Poor men would be bound for life into menial labor, and American democracy would die.

In 1860, Americans refused to let that happen.

Slaveholders’ desperate attempt to hold onto power by launching a coup against the government sparked a backlash. Northerners determined to protect America and its democratic system of government fought the southern rebels, and they won the Civil War. With that cataclysmic fight, Americans reestablished that the fundamental principle of America was equality of opportunity, and that the government was “of the people, by the people, and for the people.”

Now, once again, American democracy is under siege.

Update: [This story has been corrected to reflect that Josh Barro's tweet was posted in December 2013, not November 2015.]