This will make you even madder about North Carolina's anti-LGBT law: Right-wing backers have the gall to say they're the victims

Under fire for a pro-discrimination bill, North Carolina conservatives say they're oppressed if they can't oppress 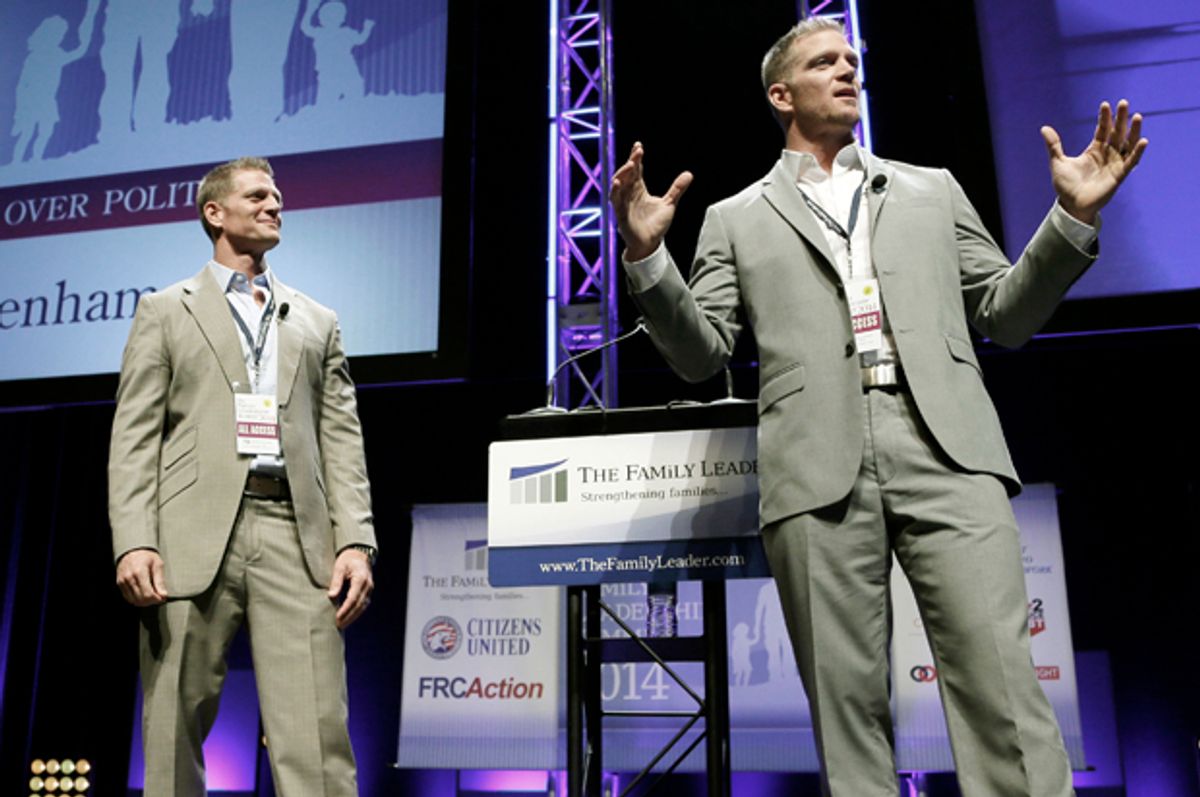 With a presidential election year bearing down on them and a need to get evangelical voters to the polls, Republican state legislators in various red states have been hastily passing bills that, under the guise of "religious freedom", protect and encourage discrimination against and harassment of LGBT people. One of these bills, signed into law by North Carolina governor Pat McCrory, was specifically drafted to block the city of Charlotte's new ordinance outlawing discrimination based on sexual orientation or gender identity.

Since then, there's been an outpouring of anger at the bigots of North Carolina for hiding behind false claims of "religious liberty" to justify oppression. After all, the same "religious liberty" gambit was used to justify Jim Crow laws, as racists claimed that because their religion forbade race-mixing, they should be able to impose their views on everyone else. Because "freedom". We now see that argument for the paper-thin ruse it was, but here it is again, being rolled out by bigots who want to impose their views on those who disagree, under the guise of "religion".

In addition, the law requires transgender people to use the bathroom of the opposite sex. So even if you're a business owner whose religion teaches love instead of hate, you will not be allowed to let transgender people pee in peace, but instead are expected to force them into a bathroom where they will be uncomfortable and their presence will be disruptive. So much for "religious freedom". Those love-not-hate religions aren't seen as legitimate religions in the eyes of North Carolina Republicans, it seems.

In reaction, North Carolina religious bigots are doubling down, arguing that if they can't humiliate and discriminate against people based on sexual orientation or sexual identity — two things that aren't really their business anyway — then they are the ones being oppressed here.

Last week, North Carolina Republican Lt. Gov. Dan Forest went on the program "Washington Watch", run by the Family Research Council, which has been designated a hate group by the Southern Poverty Law Center for its extreme anti-gay rhetoric. Forest returned to the thoroughly despicable well that bigots have been using to justify banning transgender people from using the proper bathroom, which is floating the threat of rape in order to scare people into accepting the harassment of trans people in public places.

"Well, our bill does not discriminate against anybody," Forest said in flat lie to host Tony Perkins. "In fact, the Charlotte ordinance was amazingly discriminatory against especially women and girls who no longer had the freedom to walk into a restroom and know that they would be safe and secure in that restroom without a man walking in or a pedophile or a predator walking into that bathroom."

Oooooh, gotcha. Except not. Because the Charlotte ordinance did not, bigotry-based hysterics aside, legalizing raping people so long as you make sure to do it in a public bathroom. No, Forest is invoking some dumb right wing urban legend that rape happens because men in beards put on dresses and lurk in bathrooms, a legend that is not only easily debunked but defies common sense.

States and cities who have passed anti-discrimination laws haven't had a surge of men in dresses raping women. Rapists continue to operate just as they always have, mostly by targeting women they know and claiming afterwards the sex was consensual. And if they do get their jollies lurking in bathrooms for victims, it's just easier to slip in when no one is looking than to draw attention to yourself by dressing like a woman. Also, real talk: It's a lot easier to get other straight men to believe your "I'm not rapist, women are just lying sluts!" defense if you are not seen lurking around bathrooms in a dress.

Christian right idols, brothers Jason and David Benham, took the "help help I'm being oppressed!" nonsense to the next level, with a column at WorldNetDaily portraying bigots as victims if they're prevented from harassing people about what they do in bed or what they have in their pants.

"Today, the sexual revolution of Sodom has pervaded every sphere of society, capturing both young and old," they write. "And anyone standing in the way will be surrounded by an angry mob demanding participation."

Demanding participation? Whoa. Are people showing up at your house and making you have gay sex? Are they grabbing you off the street and forcing you to get gender reassignment surgery? Uh, no.

What the "angry mob" of supposed perverts is doing is asking religious bigots to mind their own business. Don't follow people into bathrooms, demanding to see a birth certificate or genitals to "prove" their gender to you. Don't interrogate people about whether their marriage fits your ideal standard of a marriage just because you're baking a cake for them. Millions of straight and cis Americans interact with gay and trans people without harassing them, and rest assured, they are doing just fine.

But not for the Benham brothers, who dramatically intone, "The 'vine' of Sodom in a nation forces participation against the will of the people. It refuses to be told, 'No.'"

Make no mistake, all this boils down to conservatives trying to exert ownership over others. This was driven home in an incident that happened in North Carolina the day after the state passed the pro-discrimination bill. A woman named "Kelly" received a letter from the First Baptist Church in Bostic, N.C. that demanded she divorce her wife and demand their forgiveness or else "the Church will have no choice but to take appropriate and prayerful action to address the standing of your fellowship with this Body".

Kelly, who told SB Nation that she hasn't attended this church since her 20s, also said this is the first time they've reached out to her in 15 years. On one hand, it's kind of comical, kicking someone out of a church that they clearly quit a long time ago. On the other hand, it's fairly obvious what's going on here: They are using excommunication concerns as an excuse to harass a stranger because she's a lesbian and they don't like it. The letter is about conveying the message that even though she doesn't go to their church, they feel ownership over her and feel entitled to try to control her life and destroy her marriage.

While the letter doesn't mention the new pro-discrimination law, it's hard to imagine all that the discourse around it isn't having an effect. This is what happens when you tell bigots that their "religious freedom" entitles them to exert control over the lives of others, even people that are strangers to them.

That's why anti-discrimination laws are what is truly protecting freedom. The right of LGBT people to go about in public, marry, and use the same services as everyone else without being discriminated against or harassed trumps the very minor inconvenience to conservative Christians that is learning to mind your own business.