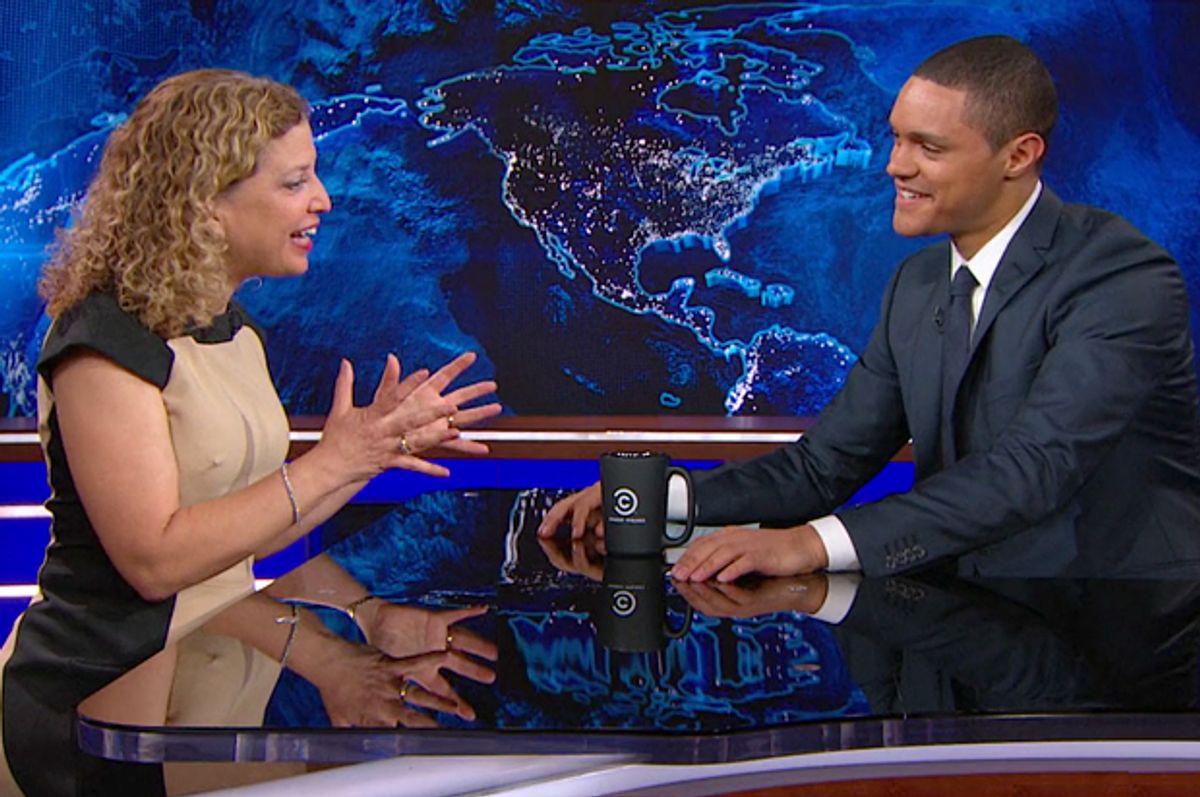 It’s probably not from listening to his critics in the press, but Trevor Noah has become more prepared, more serious, and more focused in his interviewing of political figures. Last night’s interview with DNC chair Debbie Wasserman Schultz showed the “Daily Show” host getting closer to Jon Stewart territory. But he’s still falling short, and last night it was mostly from what tennis rules call an unforced error.

Wasserman Schultz, who is also a Florida Congresswoman, is widely disliked by the left side of the party, and is considered to be in the tank for Hillary Clinton. The calls for her to resign from the DNC have been building, especially from Bernie Sanders supporters.

She didn’t do anything pro or con her reputation Monday night, which will go down in history for Noah’s indelicate question about the DNC and Bernie Sanders. It did show the host at his best and worst, though. "A lot of people feel,” he asked her, “and I'm going to paraphrase, that Bernie is being cock-blocked by the DNC. Is there any merit to this?"

To some, it showed Noah getting more serious. Esquire, for instance, called it a Stewart-like moment. It definitely shows that Noah has more guts at confronting politicians than he used to.

But there were two problems with this. The first is that the DNC chair dodged the question this way:

As powerful as that makes me feel, I'm not doing a very good job of rigging the outcome or … blocking anyone from being able to get their message out. The reality is I have a job as a national party chair that one I have a thick skin and requires me to absorb the body blows so our candidates can stay above the fray, and if I have to take a few punches so they can get their message out then so be it.

Did that really enlighten us at all? He allows Wasserman Schultz not only to avoid answering, but to make herself look tough for taking those punches. Noah was clearly prepared with good questions but not with the ability to follow it up.

The other problem with the cock-block issue is that even though the term sounds like a playful piece of slang, it’s at least passively sexist. (It’s about stopping a guy from “scoring,” after all.) Whether it’s seriously sexist, or just a little bit, is something we can debate. But why would you use a phrase like that in a race that’s had an unpleasant gender subtext? In which at least some of the opposition to Clinton – and there are plenty of good reasons to oppose her – has been misogynist?

It’s too bad, because otherwise Noah seemed more informed than usual. He led off by asking about the increasing rancor in the Democratic race, and followed up his questions several times. He asked about Bernie fighting back at Clinton on Twitter, asked whether Super Delegates were anti-democratic, and brought up Susan Sarandon’s comment about a Trump victory. On balance, this was a much better interview than most of Noah’s encounters with politicians.

He’s clearly plenty smart. But Noah errs by being too breezy, too cute.

He let the DNC chair boast about the Democratic race and criticize the Republicans – she managed to unleash a huge number of clichés, from “at the end of the day” and “the best and the brightest” to “get down to brass tacks” and ”roll up our sleeves” – and she certainly ran away with the conversation a few times. (Noah was surprised she talked about the Republican clown car?) He failed to ask her about payday lenders, which choke people short on cash, including in Wasserman Schultz’s home state.

But on balance, he’s getting sharper.

People who say Noah isn‘t funny are missing the appeal of a very good, sometimes great, comedian. And those early charges that he was a sexist because of his tweets before he joined “The Daily Show” full-time have not gone anywhere mostly because he’s generally been respectful to women and avoided obnoxious comments.

So last night was both a step forward and a step back. Noah is a substantial talent. But he needs to avoid going for the easy laugh when he’s dealing with a serious issue.