Most Americans want "radical change" — it's socialism or barbarism, and Clinton would only mean more of the latter

2/3rds of voters in the U.S. seek "radical change"; supporters of all presidential candidates except Clinton agree 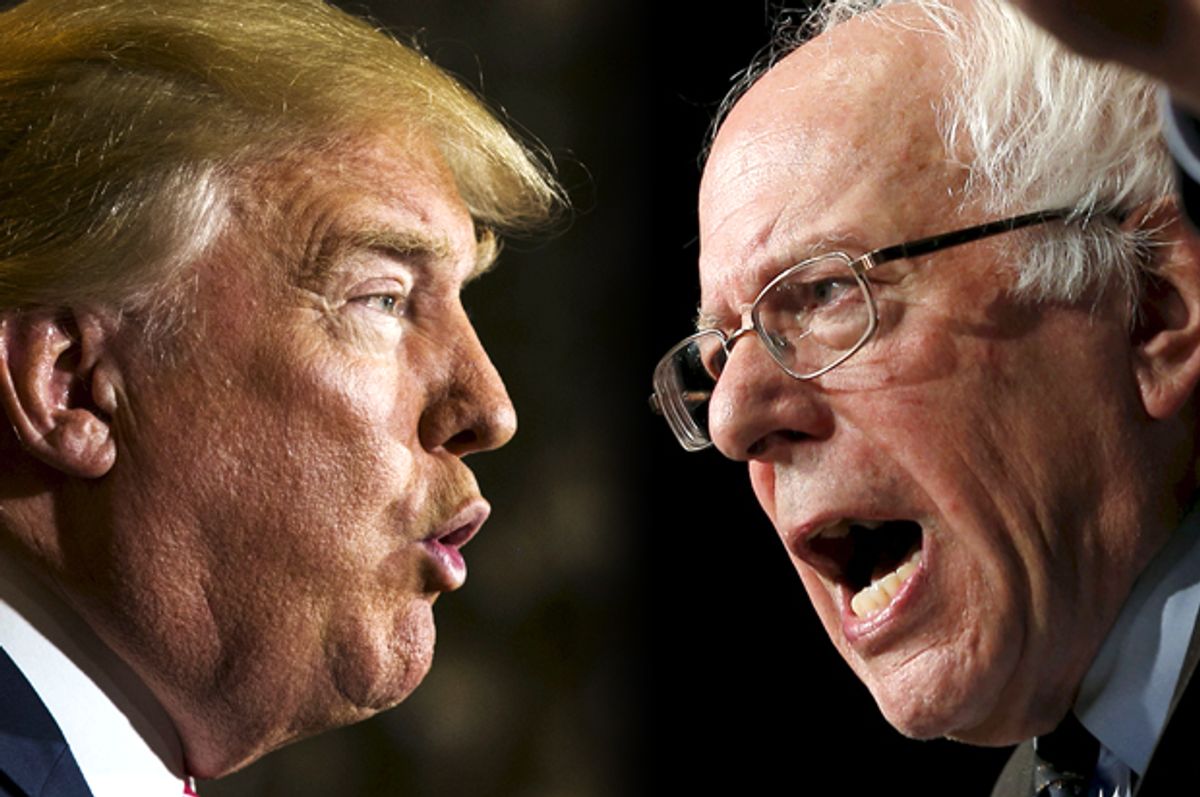 The 2016 presidential election is among the most interesting political campaigns in the history of the U.S. More so than perhaps any other, it has exposed just how tired Americans are of the status quo, and just how much they yearn for an alternative.

The explosive growth of the grassroots movement behind Sanders — a self-declared democratic socialist who refuses to take Wall Street money, a longtime independent senator from Vermont who was little-known before declaring his presidential bid and who was immediately written off as a mere protest candidate when he did so — attests to this widespread frustration with politics as usual.

Sanders has slammed his opponent, hyper-hawkish Wall Street-backed multimillionaire Clinton, as part of the establishment so many Americans are railing against. She has pushed back, largely ignoring Sanders' political critiques and instead insisting he "is the only person who I think would characterize me, a woman running to be the first woman president, as exemplifying the establishment."

A new poll, however, shows that, while she may pretend otherwise, Clinton is widely recognized as the true establishment candidate.

When asked what they thought about the statement "the old way of doing things no longer works and we need radical change," the survey found that 64 percent of voters agreed.

The responses were split up based on party and on voters' candidate of choice. 71 percent of Republicans agreed that the U.S. needs radical change; so too did 58 percent of Democrats.

Supporters of every presidential candidate expressed desire for radical change, save for one. The only exception? Hillary Clinton.

Just 46 percent of Clinton's supporters feel the same, on the other hand. And only 14 percent strongly agree.

On the Republican side, a majority of voters for all three candidates want to see the U.S. change radically.

Clinton is the only candidate who has a majority of supporters who oppose radical change.

This is not surprising to anyone who has closely monitored the election. Clinton has long been the preferred establishment candidate. Her long history of backing neoliberal economics, "tough-on-crime" policies that led to mass incarceration, pro-corporate environmental stances and war after war ensures that things will carry on as they have for decades.

Large sections of international capital have also thrown their weight behind Clinton. For 30 years, Clinton's top donors have been banks and corporations (while Sanders' top donors have consistently been labor unions).

Many of Clinton's supporters are fine with the status quo. It has benefited them, after all. In primary after primary, young Americans overwhelmingly vote for Sanders, in landslides. Clinton's most devoted voting bloc consists of families who earn more than $200,000 per year.

Most telling of all is that many prominent neoconservatives have come out in support of Clinton — although they already have for years (Dick Cheney has heaped praise upon her). The neocon establishment, the embodiment of the status quo, admires Clinton's pledge to preserve American empire, and shares her proclivity for flexing U.S. military muscle at any possible opportunity.

Neocons recognize that Donald Trump, the Republican Party's front-runner, is a wildcard, extreme and unpredictable; whereas, while Clinton has also been inconsistent on a huge variety of issues — from trade deals to the environment to the criminal justice system to LGBTQ rights — there are a few issues she has always been consistent on: namely Wall Street and war. Hillary almost never fails to look out for the banks, and she's a die-hard hawk.

American voters are waging a full-scale rebellion against both of the parties that have maintained a duopoly on U.S. politics for decades.

Sanders' supporters want the country to radically change, to move to the left after steadily drifting to the right for decades. The Republican Party base, which is mobilizing behind Trump, and to a lesser extent Cruz, wants radical change in the direction of the even further right.

In times of economic crisis, the masses politicize. Citizens lose faith in the system, and gravitate toward a new politics.

It is no surprise that a majority of voters want to see radical change. For millions upon millions of Americans, life is a miserable struggle. Four out of five U.S. adults grapple with joblessness and near-poverty for at least parts of their lives — and, for people of color, the hardship is even more grating.

Meanwhile, things are getting worse, not better. Real wages have stagnated for decades, inequality continues to skyrocket and the country has still not completely recovered from the 2008 financial crisis, while experts warn we may all be on the verge of another crash.

In the wake of Occupy Wall Street, and at a time when people are rising up in Black Lives Matter and the environmental movement, a new political space has opened up. Socialism is no longer a dirty word; in fact, almost half of Americans would vote for a self-described socialist — and polls show the self-described socialist would beat Trump by bigger margins than Clinton.

Trump may have developed a reputation for being "anti-establishment," but he is anything but. In reality, he represents the establishment de rigueur: he is one of the richest people in the world, with billions of dollars in wealth.

"A look around us at this moment shows what the regression of bourgeois society into barbarism means," she wrote in 1915, in the midst of World War I. A century later, Luxemburg's remark remains just as accurate.

Barbarism is the only accurate word to describe a political moment in which the leading presidential candidate from one of the two hegemonic parties is running a fascistic campaign, based on promises to ban people of a particular religious group, to deport another 11 million mostly Latina/o residents and to build a colossal wall on the southern border.

In many ways, however, this barbaric vision for the world already exists. Some of Trump's policies are presently being implemented, albeit in weaker manifestations.

Muslims face discrimination and repression throughout society, in the forms of police surveillance and entrapment, frequent hate crimes and shadowy policies like the no-fly list.

The Obama administration has deported more than 2.5 million people — more than any other president — including Central American refugees fleeing violence who have been killed upon being forced to return.

And, in the three decades since the passing of NAFTA, the border has become thoroughly militarized, as the heavily armed forces monitoring it get more and more bloated.

The enormous grassroots movement that has rapidly developed behind Sanders epitomizes the widespread desire to turn away from this barbarism and toward socialism.

Yet Luxemburg's observation was twofold; there was no space for a middle ground. Clinton's establishment politics do not lie in between barbarism and socialism; the status quo is already one of barbarism, and her presidency would only mean further preservation and entrenchment of it.

If you think Trump is bad now, wait for the even more grotesque — and fascistic — political monster that would emerge in the next election, after four or even eight more years of further austerity, immiseration, environmental destruction and war under a Clinton presidency.

The American public overwhelmingly recognizes the need for radical change. The problem that remains — a grave problem that could very well be existential — is how to siphon this popular energy in a progressive, socialist direction, and not a barbaric, fascistic one.