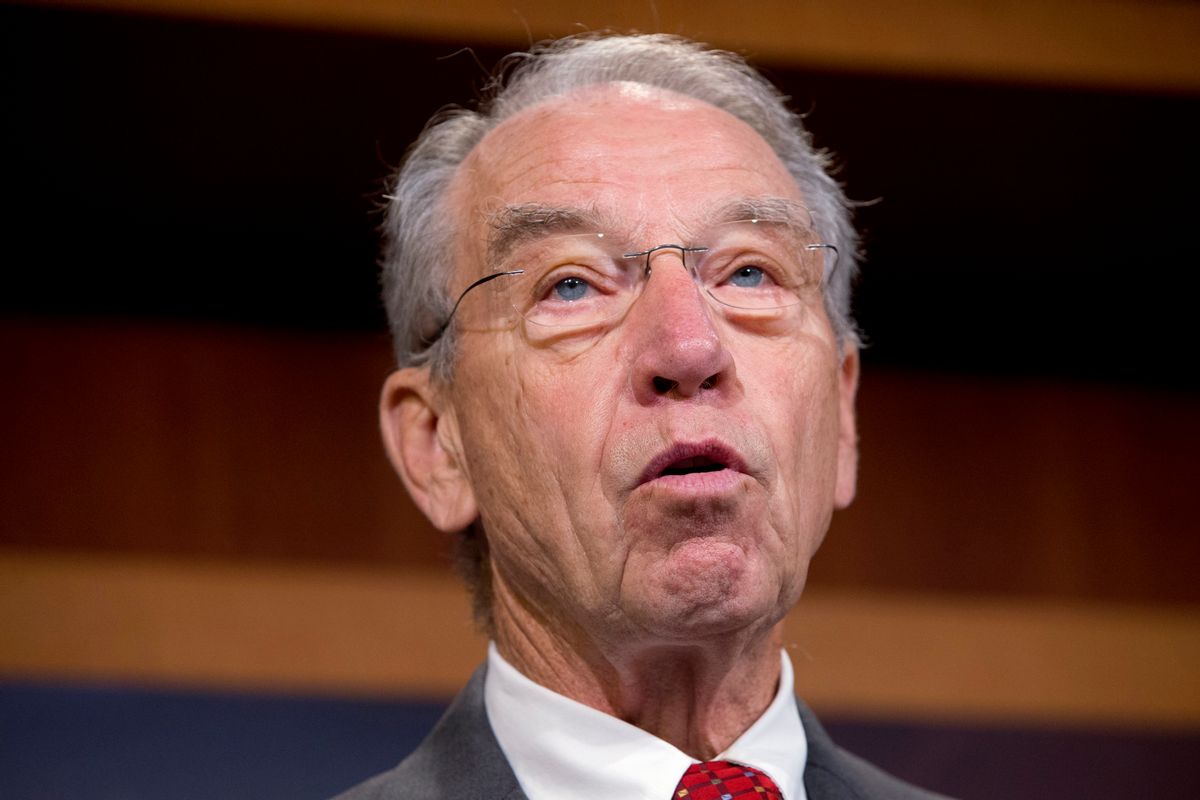 FILE - In this Oct. 1, 2015, file photo, Senate Judiciary Committee Chairman Sen. Charles Grassley speaks on Capitol Hill in Washington. With Mondays vote for the federal judge from Philadelphia, the Senate will have cleared its to-do list of nominees to the powerful appeals courts. Nine vacancies will remain, but President Barack Obama has yet to nominate individuals for those posts. "Were moving at a reasonable pace," said Grassley, in a scrap with Sen. Chuck Schumer last year. (AP Photo/Jacquelyn Martin, File) (AP)
--

President Obama clearly had the longish game in mind when he nominated moderate judge Merrick Garland to the Supreme Court in spite of intractable Republican opposition to the President naming any Antonin Scalia successor. Perhaps feeling a bit of the pressure the President intended to place on Senate Republicans in leadership and up for reelection in naming less of a firebrand, Senate Judiciary Committee Chairman Chuck Grassley took to desperately attempting to deflect from Republicans' historic obstructionism by daring to lash out at Republicans' favorite conservative punching bag, Supreme Court Chief Justice John Roberts --  this time from the well of the Senate floor.

On Tuesday, the Iowa Republican who faced a delegation of constituents knocking down his office door in Washington, D.C., urging the conservative to finally hold hearings on Garland's nomination, and a stern op-ed back in his hometown newspaper accusing him of being the reason for stalemate on the nation's highest court, decided to distract from the growing chorus calling on him to do his job by criticizing how another man is handling his.

"I think he is concerned with the wrong problem," Grassley said of Roberts in a speech on the Senate floor. Grassley was ostensibly reacting to a speech the conservative chief justice delivered just days before the passing of the most controversial figure on the bench in decades.

Speaking at New England Law ten days before Scalia's death, Roberts pointed to the three most recently appointed Supreme Court justices to argue that "the [nomination] process is not functioning very well.”

Justices Kagan, Sotomayor and Alito are "extremely well qualified for the court," Roberts insisted, adding that their partisan confirmation votes "suggests to me that the process is being used for something other than ensuring the qualifications of the nominees.”

On the Senate floor Tuesday, Grassley said "the chief justice should resist" interjecting himself in the nomination debate, perhaps understanding that if Roberts likely considered liberal Obama nominated Justices Kagan and Sotomayor "extremely well qualified," he'd likely say the same of Garland -- who some have described as the most qualified nominee in history.

"The confirmation process has gotten political precisely because the court itself has drifted from the Constitutional text and rendered decisions based instead on policy preferences," Grassley said of Roberts, taking a not-so-veiled swipe at his Obamacare decision. "In short, the justices themselves have gotten political."

Grassley continued: "He would be well-served to address the reality, not perception, that too often there is little difference between the actions of the court and the actions of the political branches. So, physician, heal thyself."

Despite his tirade against the chief justice, Grassley has already been pressured into meeting with Garland next Tuesday after initially refusing to consider any Obama nominee. Garland will also meet with three other Republican Senators next week and has already met with Republican Illinois Senator Mark Kirk who has since called for hearings on his nomination.