The Koch brothers don't get it: Their latest push to nominate Paul Ryan at the convention is dead in the water

If we have learned anything this year, it's that people like the Koch brothers can't dictate who the GOP nominates 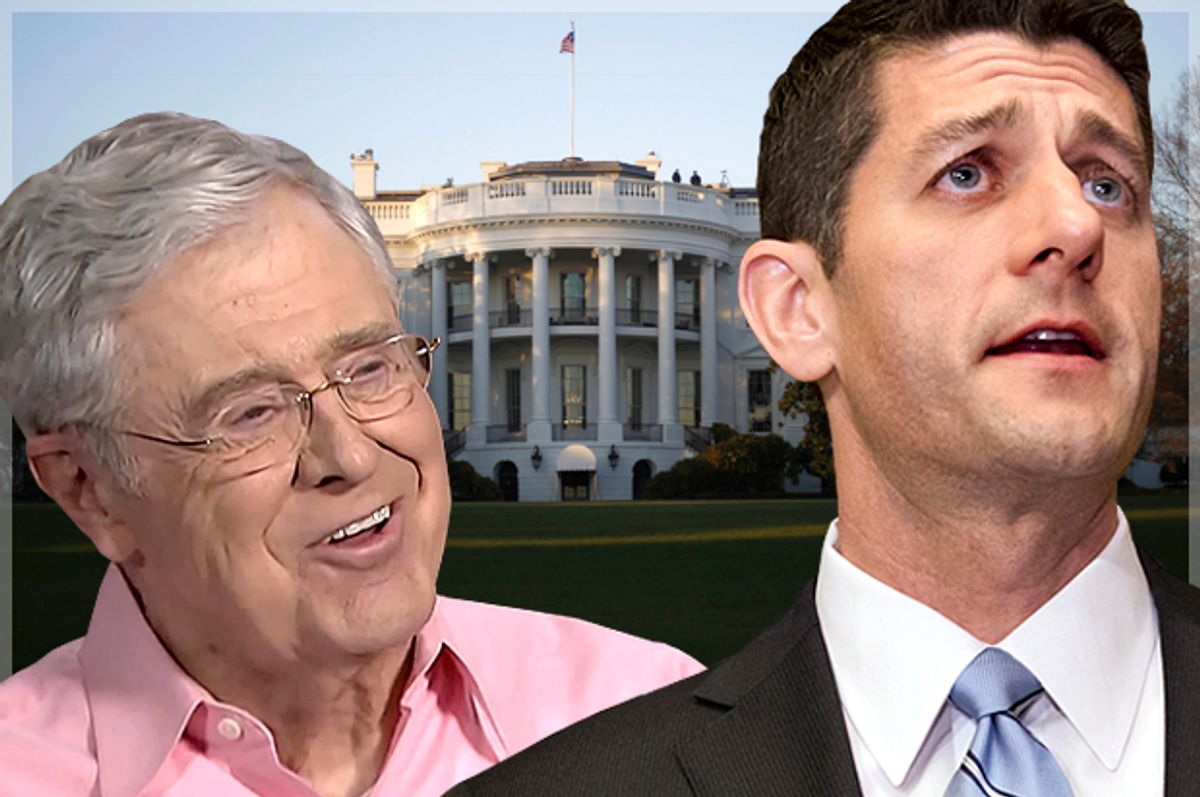 “While I'm grateful for the encouragement I've received, I will not be a candidate.” This statement denying any interest in the Speaker of the House position was uttered by Paul Ryan, days before he accepted the speaker of the house position. Today, with equal plausibility, Ryan is insisting he does not want to be president.

“You know, I don't know, that's not my decision,” Ryan told conservative radio host Hugh Hewitt this week when asked about the possibility of his name appearing on the convention ballot. “That is going to be up to the delegates. I'm going to be an honest broker, and make sure that the convention follows the rules as the delegates make the rules...But I do believe people put my name in this thing, and I say get my name out of that. This is, if you want to be president, you should run for president. And that's just the way I see it.”

Ryan's tepid denials notwithstanding, rumors are swirling that the House Speaker has become the savior candidate for the Republicans at the convention. Staring down the possibility of a Trump or Cruz nomination, the desperation is palpable. As Salon's Simon Maloy pointed out yesterday, the “Draft Ryan movement arises out of both the Republican establishment's love of Ryan as a politician and their distaste for Donald Trump and Ted Cruz.”

If you're a Republican financier, Ryan makes a ton of sense: He's a youthful politician whose soulless admiration for Randian economics is concealed behind a fresh face - you can sell that. Cruz, on the other hand, is thoroughly unelectable, and Trump is a vapid wild card - he terrifies almost everyone. But Ryan will gladly do the bidding of the 1 percenters while presenting a happy face to the public, much like Reagan did in the 80s.

No surprise, then, that Charles Koch is privately promoting Ryan as a potential nominee at what is sure to be a contested Republican convention. The Huffington Post reports that “Koch is confident House Speaker Paul Ryan could emerge from the Republican National Convention as the party's nominee if Donald Trump comes up at least 100 delegates shy.”

“Koch,” according to the report, “believes Ryan would be a 'shoo-in' at a contested convention, should the campaign get to that point...he and his brother David are fond of Ryan...they appreciate the agenda he has pursued as speaker, including opposition to tax extenders and heightened warnings against corporate welfare – positions that contrast with the admittedly vague portfolio pushed by Donald Trump.”

To be clear: it's highly unlikely that Ryan is shoehorned into the process at the convention. It's possible, but still unlikely. And should it happen, it won't be because Charles Koch wanted it to. If this cycle has proven anything, it's that people like the Koch brothers can't dictate who the party nominates. If they could, Scott Walker would be sleepwalking towards the nomination. Besides, forcing Trump on a base that has explicitly rejected the establishment will, as Ted Cruz has warned, incite a “revolt.” Supporters of Trump and Cruz, now a majority of the party, have expressed their will: they don't trust party elites. Ryan, whatever else he is, is a party elite, and a darling of the establishment. A last-minute Ryan nomination would be tear the party asunder.

The Ryan-as-savior trope will persist, however. There's a deep cognitive dissonance among the GOP donor class. They still haven't quite processed what's happened. They've lost control of the party; Trump and Cruz are symptoms of this more fundamental fact, but that's all they are. Now Republican insiders face an impossible choice: save the party from itself by altering the convention rules and thwarting the will of the voters or do nothing and watch the party annihilate itself in November.

That isn't much of a choice, really. Both roads lead to a landslide defeat in the general election. The Koch brothers ought to know that by now. And if they don't, they will soon enough.