In a New York Times op-ed, five women who lost husbands on 9/11 condemn U.S. ties with the Wahhabi Saudi monarchy 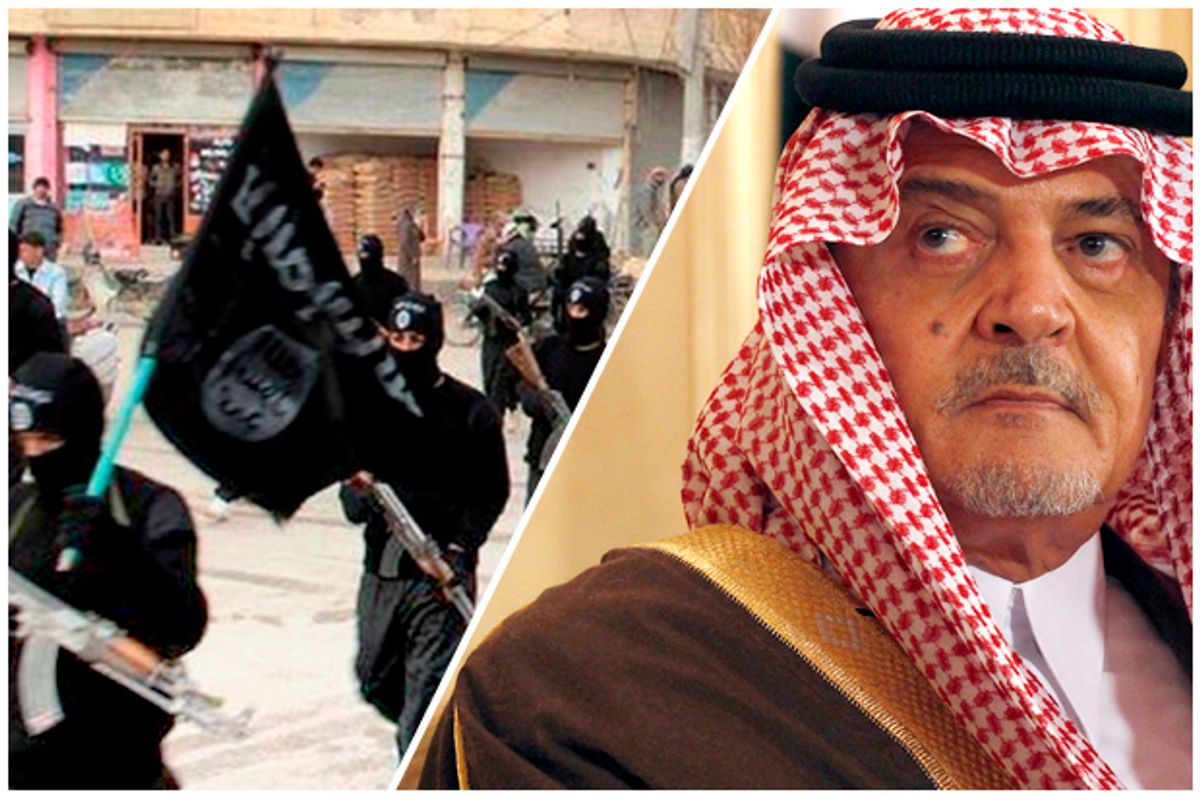 Five widows of victims who died in the 9/11 attacks published an op-ed in the print edition of The New York Times on Wednesday, condemning the U.S. government's close alliance with the extremist Saudi monarchy.

"Saudi Arabia has spread its Wahhabi religion around the world for years. Its funding of madrassas and support of extremist clerics have paid and paved the way for the spread of deadly terrorism," the women wrote.

"We should know, since our husbands were killed by Saudi hijackers on 9/11," they added. "These men were well schooled in the Wahhabi belief of killing the infidels to further the Sunni Islamic cause."

Wahhabism refers to the extremist sect of Islam spread by the Saudi monarchy. It is a minority tendency in the incredibly diverse religion, and many Muslims do not even consider Wahhabism to be a real form of Islam, arguing it is a distortion of the religion much like the strands of extreme, bigoted Christianity preached by fundamentalist groups like the Westboro Baptist Church or the Ku Klux Klan.

Saudi Arabia is a theocratic absolute monarchy that governs based on an extreme interpretation of Sharia (Islamic law), regularly beheads dissidents and refuses to grant women basic rights.

As Salon has detailed in a previous report on how Saudi Arabia funds and exports Islamic extremism, in the past few decades, the Saudi regime has spent an estimated $100 billion spreading its extremist ideology worldwide.

Saudi organizations infuse Wahhabism in ostensible charity work — for example, funding schools and mosques, but requiring that these extremist beliefs be taught there in return — and often target Muslim communities in poor, underdeveloped countries.

After the ISIS attacks in Paris in November 2015, scholar Yousaf Butt argued “the fountainhead of Islamic extremism that promotes and legitimizes such violence lies with the fanatical ‘Wahhabi’ strain of Islam centered in Saudi Arabia.”

He warned, "If the world wants to tamp down and eliminate such violent extremism, it must confront this primary host and facilitator."

The five women who wrote the Times op-ed noted how elements within Saudi Arabia have financed extremist groups like al-Qaeda.

"We struggle to understand how financing the murder of 3,000 innocent people on 9/11 equates to being 'closely allied with the United States,'" the widows wrote.

"The Saudis should not be trusted, nor should they be considered our friends," they concluded.

This financing for extremist groups is widely yet quietly acknowledged by the very governments that align themselves with Saudi Arabia.

A 2013 European Parliament report noted that “Saudi Arabia has been a major source of financing to rebel and terrorist organisations since the 1970s.”

"Countries like Saudi Arabia, Qatar, United Arab Emirates and Kuwait do too little to stop rich and conservative donors from financing terrorist organisations through charitable and religious institutions," the report added.

The European Parliament report also stressed that the "United States is well aware about the financing network starting from Arab countries and reaching terrorists organisations through charitable institutions," citing a classified 2009 State Department memo signed by then-Secretary of State Hillary Clinton which admits that “Donors in Saudi Arabia constitute the most significant source of funding to Sunni terrorist groups worldwide.”

“Saudi Arabia remains a critical financial support base for al-Qa’ida, the Taliban, LeT, and other terrorist groups,” indicated the U.S. government cable, which was released by whistle-blowing journalism organization WikiLeaks.

The State Department memo added, "It has been an ongoing challenge to persuade Saudi officials to treat terrorist financing emanating from Saudi Arabia as a strategic priority."

The U.S. government has consistently referred to the Saudi monarchy as a "close ally." Saudi Arabia sits on the world's second-largest oil reserves and has done more than $100 billion in arms deals with the U.S. in the past several years.

With the recent rise of ISIS, the U.S. government says the Saudi monarchy has done more to clamp down on extremism. But Saudi Arabia has a long history of supporting such Islamist militancy, often with the tacit support of the U.S.

In the 1980s, Saudi Arabia worked with the U.S. and Pakistan to arm and train Islamic extremist groups in order to fight the Soviet Union. And today, the Saudi regime continues to support extremist groups like the al-Qaeda-affiliated al-Nusra Front in Syria, which some analysts have argued is even more dangerous than ISIS.

Saudi Arabia firmly rejects that any support for the Sept. 11 attackers came from its country. But 15 of the 19 hijackers responsible for the attacks were Saudi citizens. Additionally, Zacarias Moussaoui, a convicted 9/11 plotter, confessed in sworn testimony to U.S. authorities that members of the Saudi royal family had funded al-Qaeda before the attack. Saudi Arabia strongly denies that this is true.

The Times op-ed was written by the so-called "Jersey Girls" — Kristen Breitweiser, Patty Casazza, Mindy Kleinberg and Lorie Van Auken, four women who lived in New Jersey when their husbands were killed in the attack — along with fellow widow Monica Gabrielle.

When the 9/11 atrocities took place, many of these women were apolitical. In the past decade, however, they have become outspoken activists, calling for the U.S. government to more thoroughly investigate the horrific attacks that left approximately 3,000 Americans dead.

The 2002 joint House-Senate report on the Sept. 11 attacks has 28 pages on al-Qaeda’s “specific sources of foreign support,” but this section is classified. The 9/11 widows subsequently helped pressure the U.S. to create the 9/11 Commission, which insisted in its 2004 report that it “found no evidence that the Saudi government as an institution or senior Saudi officials individually funded” the al-Qaeda attackers. This still leaves the possibility, however, that other elements within Saudi society financed the extremists.

The women are advocating on behalf of the pending legislation the Justice Against Sponsors of Terrorism Act, which they say would make "clear that no foreign state is entitled to immunity for its involvement in a terrorist attack on American soil."

In their op-ed, the widows were also responding to an article published on the front page of the New York Times on April 1, which details how militants in the extremist group ISIS have "adopted elements of Saudi Arabia’s conservative version of Islam — a Sunni creed known as Wahhabism."

The piece shows how ISIS has adopted Saudi Arabia's extremist religious ideology,  yet has turned against the Saudi monarchy. Supporters of the extremist so-called Islamic State argue that the Saudi royal family has corrupted their extremist view of Islam, and must therefore be destroyed.

“Wahhabism is fundamental to the Islamic State’s ideology,” a Princeton University scholar told the Times. “It informs the character of their religion and is the most on-display feature, in my opinion, of their entire ideology.”

The 9/11 widows noted the irony, writing, "Perhaps it is time for Saudi Arabia to take to heart the proverb 'you reap what you sow.'"

Saudi Arabia has been widely compared to ISIS (although it has angrily threatened to sue critics making such a comparison).

Algerian journalist Kamel Daoud described the Saudi regime in another op-ed in the New York Times as “an ISIS that has made it.”

A report by the Brookings Institution found that the country where the most ISIS supporters are tweeting from is, by far, Saudi Arabia. Significantly more pro-ISIS tweets have come from Saudi Arabia than from either Syria or Iraq, where the extremist group has carved out a self-proclaimed "caliphate."

An estimated 3,000 Saudis have joined ISIS, and Saudi political dissident Turki al-Hamad explained in a TV interview how "you can see [in ISIS videos] the volunteers in Syria ripping up their Saudi passports."

Like the widows writing in the New York Times, the Saudi dissident stressed, "In order to stop ISIS, you must first dry up this ideology at the source. Otherwise you are cutting the grass, but leaving the roots. You have to take out the roots."