Clinton's no bunny boiler: Sanders campaign turns to '80s-era sexist stereotypes about female ambition, which will blow up in his face 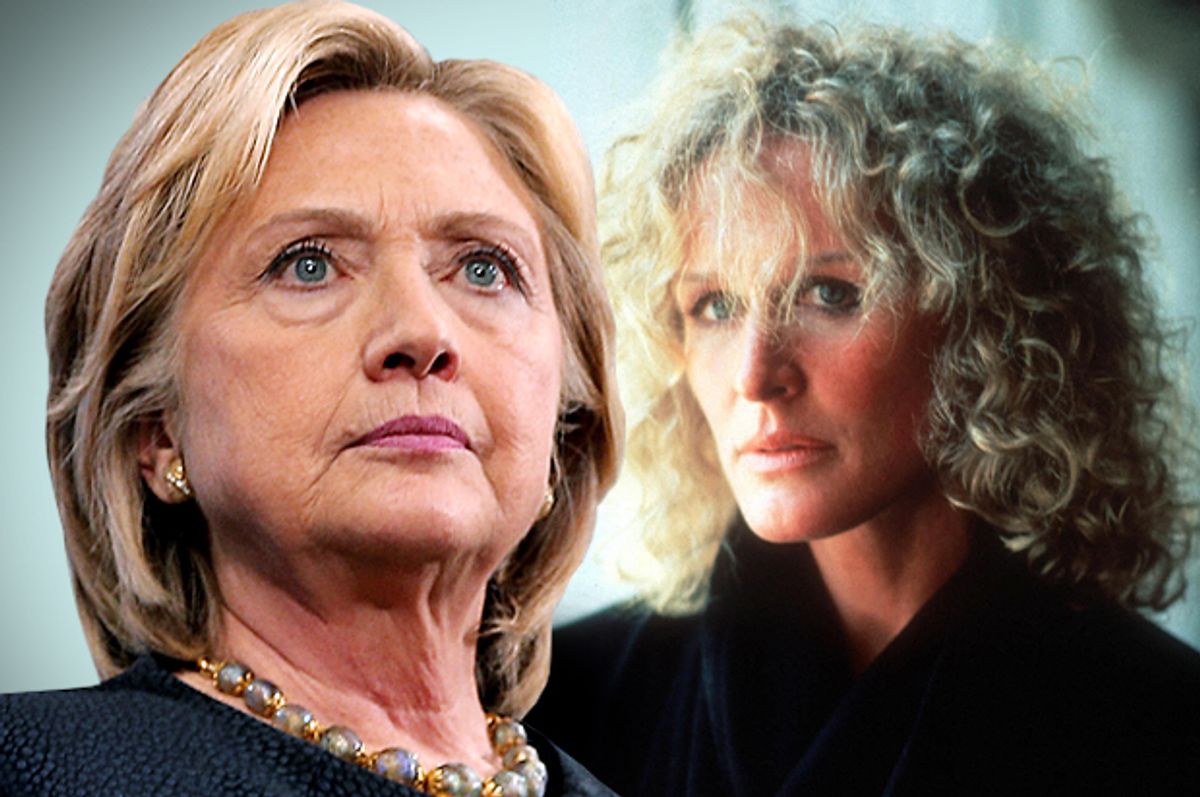 It's hard to deny that things are looking a little tense for the Bernie Sanders campaign these days, despite a long series of primary wins. How else to explain why it is they've turned to tired 80s-era stereotypes of professional women as cold-hearted ambition monsters in an effort to take potshots at Hillary Clinton?

"Don’t destroy the Democratic Party to satisfy the secretary’s ambitions to become president of the United States," Jeff Weaver, Sanders's campaign manager, said to a not-present Hillary Clinton on CNN.

Well, it's been a campaign season rife with women being dismissed with the whole cornucopia of sexist stereotypes, from the Donald Trump camp using the "crazy lying bitch" stereotype against a female reporter allegedly assaulted his campaign manager to Ted Cruz and John Kasich backing the idea that women are too stupid to make the abortion decision. So why not just add to the pile by insinuating that Clinton is a real life version of Glenn Close's character in "Fatal Attraction": A cold-hearted careerist who will stop at nothing to get what she wants, destroying men and all the sweet housewives who stand in her way.

In case there was any doubt that this is what the Sanders camp is riffing off, Sanders' remarks at a Wednesday rally drove it home.

"Secretary Clinton appears to be getting a little bit nervous," Sanders said during his speech. "And she has been saying lately that she thinks that I am quote unquote not qualified to be president. Well, let me, let me just say in response to Secretary Clinton: I don't believe that she is qualified, if she is, through her super PAC, taking tens of millions of dollars in special interest funds."

"I don't think you are qualified if you have voted for the disastrous war in Iraq," he added, as part of a long list of grievances against Clinton that you have probably gotten the gist of by now.

At this point, I'm beginning to sincerely worry that young voters won't learn that it was Republicans that started that quagmire, since Hillary Clinton is the only person being held accountable for it these days.  They sure as hell aren't going to learn that she spoke out against war and only voted for the authorization after the Bush administration promised her that they would turn to it only as a last resort, a promise they almost immediately broke.

But details, details. It's clear from Weaver and Sanders' remarks that the strategy now is to go all in on insinuating that Clinton is a bunny boiler. She lies and steals and kills all to serve her endless scratching hunger for power, her vile ambition, a trait that we can safely assume no men in politics possess.

As Rebecca Traister lays out in a sharp piece at New York, it's easy to see why the Sanders camp might think this is a good idea. Right now, Sanders is getting hammered pretty hard by concerns about whether he's really up to the job of president. He says things like the Republican party would only get "get 5, 10 percent of the vote" if the media would just bother telling the public they're the party of tax cuts and slashing social welfare.

During that hotly debate New York Daily News article, he literally said that, "And I think if Republicans or some Democrats want to vote against" his free college tuition plan, "they will pay a very heavy political price." He said this in a country where Republicans hold the majority of Congress after they publicly fought for years against a universal health care system that is still mostly privately funded.

Because of this, the arguments that Clinton is more qualified because she does her homework are getting some steam, and, as Traister said, the Sanders camp has to turn that ship around by trying to portray Clinton's smarts and toughness as a liability instead of an asset. They need to sell the story that Sanders is "a kind man whose relaxed and respectful approach to power has led him to come in second to a woman who works too hard and wants to triumph too much".

The quickest, perhaps only way to do this is to resort to the ugly, sexist stereotype that there's something unnatural and perhaps murderous about ambitious women.

But the move might be short-sighted, because Clinton has been subjected to accusations of being a harpy ambition monster in shoulder pads her entire life. Unsurprisingly, under the circumstances, she's working this to her advantage. When Chris Cuomo asked her about Weaver's remarks on CNN, she laughed so hard and so winningly that it immediately went viral with gifs flying around the internet.

Though perhaps Bernie-or-bust folks see it as the evil cackle of someone about to kill a bunny.

She's also had time to register her response to Sanders's "unqualified" speech, which she dismissed as "kind of silly", before playing the part of the bigger person here by affirming that she's happy to vote for Sanders if he gets the nomination.

Her Twitter account on Thursday makes it clear that Clinton is digging in on this, working the word "qualified" into multiple tweets.

What newspapers around the country are saying about Hillary. pic.twitter.com/t1Bejz4O3F

Sanders is already appearing to realize that this might not have been the best gambit.

Sanders says that he doesn't want to talk about "Unqualified" from last night: "I'd like to talk about why the middle-class is in decline"

But these things have a way of spiraling out of control. Attempts to change the subject, at this point, just look like he's dismissing sexism as a serious issue. But for women, this stuff isn't just a silly story about political point-scoring. This strikes right at a double bind many women experience. You feel you have to work twice as hard to get as far — even young girls realize they have to get all As while boys often coast on Bs and Cs — but if you put your nose to the grindstone like that, you then run the risk of being called Tracy Flick at best, and an emasculating ambition beast who probably kills bunnies at worst.

And it's a problem that speaks directly to income inequality. That double bind, where you have to be perfect to be considered good but you can't be seen as too ambitious lest you get called castrating, often leads to women shying way from risky and competitive career paths, like science or politics, and towards safe occupations that reward competence but aren't seen as too threatening. It's a problem that definitely contributes to the pay gap, because the "safe" options are often the less lucrative ones.

As for Sanders, he is already struggling to get women to vote for him. As NPR reported Wednesday, Sanders has only won the women's vote in three primary states: New Hampshire, Vermont and Wisconsin. Whatever he wants to be, the cold hard numbers show he is the white guy candidate that white guys vote for, while everyone else votes for Clinton. This "ambition" gambit against Clinton might have seemed like a smart defensive move for Sanders, but it's also feeding the ugliest fears about him and his campaign when it comes to women.

And it's all happening right before the primary goes to New York, which probably has the densest concentration in the entire country of smart women dressed in black who don't care if you think their ambitious is unfeminine.