“Have They Run out of White Poets Yet?”: Asian and Asian-American writers mock Calvin Trillin's New Yorker poem on Chinese food 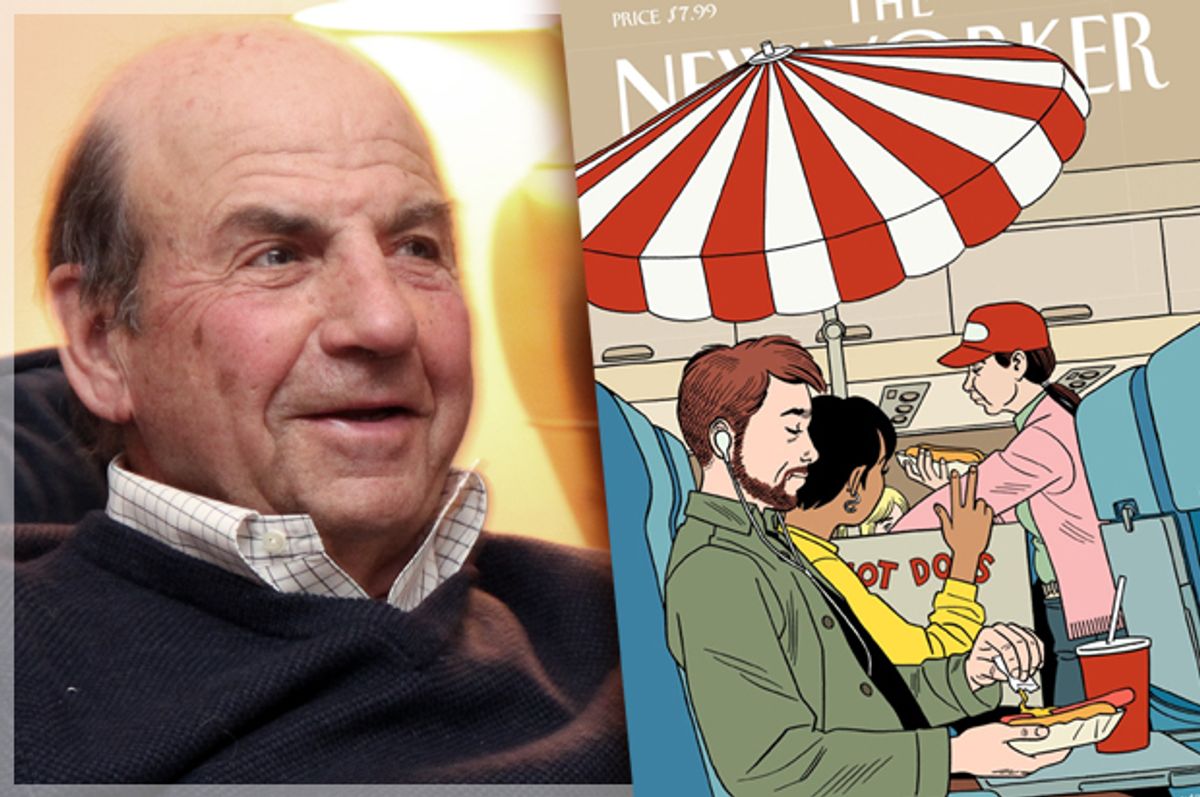 “Are We Running out of Provinces Yet?” is a “poem” written by Calvin Trillin for The New Yorker, where he’s worked since before I was born. Respect for elders and all that, but his creation includes groaner lines such as this:

Then when Shanghainese got in the loop
We slurped dumplings whose insides were soup.
Then Hunan, the birth province of Mao,
Came along with its own style of chow…

This is the poetic equivalent of your dad showing up at a school function wearing mom jeans and thinking he’s both hip and cool, then using those exact words to describe himself when you protest. Adding insult to injury, The New Yorker magazine published this drivel during National Poetry Month, that special time of the year when naïve hopefuls convince themselves that their work was rejected because their fragile, nascent couplets withered and paled in comparison to masterful verses luxuriating in the profound subtleties of language.

Nah. It’s just Trillin, composing a racist nursery rhyme about his longing for the “simple days of chow mein” -- a dish that, in its current incarnation, is about as “Chinese” as chop suey and the fortune cookie, both of which are American inventions.

How, I ask, are Trillin’s word stylings more profound than Sarah Palin’s verbal salads? More to the point:

Why does Trillin of New York feel at ease,
To bemoan the foods called Chinese?

Charitably, one could suppose that Trillin is mocking the kind of consumerist colonialism celebrated in food courts in malls across America, as well as the relentless chasing of food “innovations” that narrates countries and peoples in terms of spices and flavors. In his defense, Trillin told The Guardian that the poem "was simply a way of making fun of food-obsessed bourgeoisie."

But Twitter is nothing if not a hive mind on steroids, and its verdict was swift and merciless: the irony detector found only cluelessness in this clumsy ode to Chinese cuisine.

In response to Trillin’s poem, Karissa Chen, Fiction & Poetry Editor at Hyphen Magazine, sent out a rhetorical tweet:  If she wrote something about Chinese food in doggerel, would The New Yorker publish it? (Answer: No. Not even if it was doggerel written by a Chinese woman about American yuppie food.) Bestselling authors Celeste Ng and Beth Nguyen jumped into the thread, and the resulting tweets—storifyed here-- are hilarious.

For those wondering what’s wrong with Trillin’s verses beyond their lowbrow likeness to limericks: It’s the unselfconscious centering of the white male gaze (or taste-buds) on the “exotic” cuisine that is Chinese, the implication that China becomes relevant by virtue of being consumed by urbanites who read The New Yorker, that the world can be literally understood through a consumerist model that turns food into social media trends, the whole thing normalized through the exhausted gaze of a middle-aged man so very tired of the world catering to his whims.

At least he didn’t change his name to Yi-Fen Chou to complete the parody. Are we running out of cultures to appropriate already?

If nothing else, Trillin’s odd ode has revealed just how easy it is to write doggerel: Franny Choi penned “Have They Run out of White Poets Yet?”; Jenn Fang rustled up “Have They Run out of White Tears Yet?”; and a sixth-grader wrote a book reportconcluding that the “imagery of the poem is scary.”  Chinese food writer Clarissa Wei penned an entire ode to salad greens which is just as competently written, and arguably far wittier than Calvin’s work. With permission, here's a gem she published on her Facebook page, rather than in the pages of The New Yorker:

Have they run out of greens yet?
If they haven’t, we’ve reason to fret.
Long ago, there was just Iceberg
(Long ago, we were easy to please.)
But then Romaine came our way,
Making Iceberg strictly passé.
Romaine was the song that we sung,
Then when Baby Spinach got in the loop
We ate salads whose insides were soft.
Then Kale, the most nutrient dense of them all,
Came along with its own style of chow.
So we thought we were finished, and then
A new salad ingredient arrived: Frisee
Then respect was a fraction of meagre
For those eaters who’d not eaten Dandelion
And then from hipster gardens, Swiss chard gained fame,
Plus some others—too many to name.
Now, as each brand-new veggie appears,
It brings tension, increasing our fears:
Could a place we extolled as a find
Be revealed as one veggie behind?
So we sometimes do miss, I confess,
Simple days of Caesar Salad but no stress,
When we never were faced with the threat
Of more green we hadn’t met.
Have they run out of greens yet?