A Human Rights Watch report details the horrific atrocities the U.S. is backing in the Saudi-led war in Yemen 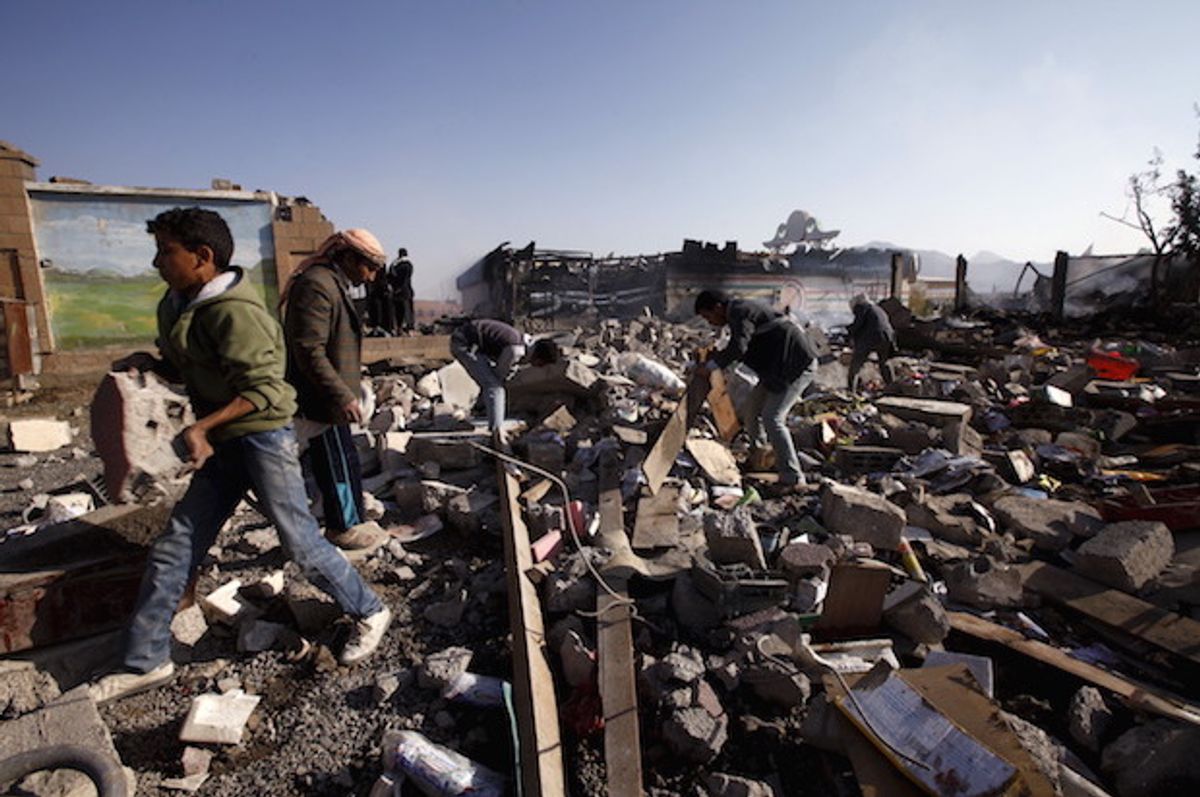 Yemenis sift through rubble after the Saudi-led coalition bombed a school cafeteria in Yemen's capital Sanaa, on February 12, 2016 (Reuters/Mohamed al-Sayaghi)
--

The bombs used by the Saudi-led coalition to carry out one of the worst massacres in the year-long war in Yemen were provided by the U.S., according to a new report by Human Rights Watch.

On March 15, the Saudi-led coalition bombed a market in the town Mastaba, in Yemen's Hajja province, northwest of the capital Sanaa. At least 119 people were killed in two airstrikes, including 25 children. Another 47 people were wounded.

In Yemen, the Hajja massacre led to enormous outrage. The attack got very little coverage in the Western press, however. It also took place just one week before the ISIS attacks on Brussels, Belgium, which got exponentially more media attention, even though 400 percent more people were killed with U.S. weapons in Yemen.

The Saudi-led, U.S.-backed bombing of Yemen has dragged on for more than a year. Well over 6,000 Yemenis have been killed, at least half of whom were civilians, according to the U.N.

Relentless airstrikes have destroyed much of the nation, plunging what was already the poorest country in the Middle East into further desperation, fomenting chaos in which extremist groups like al-Qaeda and ISIS have thrived.

The war is rarely discussed in the U.S. media, and even less so in American politics, yet the role of Saudi Arabia's Western allies is crucial. The U.S., U.K. and France have done more than $100 billion in arms deals with the Saudi monarchy in recent years.

The U.S. and U.K. are also directly militarily coordinating with Saudi Arabia in the war, sharing intelligence and assisting in the Saudi military's operations. In fact, American and British military officials are physically in the room with Saudi bombers, and have access to a list of all targets before airstrikes are carried out.

“One of the deadliest strikes against civilians in Yemen’s year-long war involved U.S.-supplied weapons, illustrating tragically why countries should stop selling arms to Saudi Arabia,” remarked Priyanka Motaparthy, emergencies researcher at Human Rights Watch, in the new report on the Hajja massacre.

“The U.S. and other coalition allies should send a clear message to Saudi Arabia that they want no part in unlawful killings of civilians,” Motaparthy added.

In March, Human Rights Watch called for an arms embargo on Saudi Arabia. “By continuing to sell weapons to a known violator that has done little to curtail its abuses, the U.S., U.K. and France risk being complicit in unlawful civilian deaths,” and organization said.

In February, the European Parliament, citing the brutal war in Yemen, voted for an E.U.-wide arms embargo on Saudi Arabia, although the agreement is non-binding. A month later, the Dutch parliament also voted to ban weapons exports to the Saudi regime.

Human Rights Watch conducted an investigation at the site of the attack at the market in Mastaba on March 28 and found remnants of a U.S.-provided satellite-guided bomb.

The human rights organization also interviewed 23 witnesses to the airstrikes, as well as medical workers at two area hospitals that received the wounded.

One day after the attack, a United Nations human rights team visited the site and compiled the names of 97 civilians killed, including 25 children. An additional 10 bodies were burned beyond recognition, and the U.N. was unable to determine their identities.

Mohammed Yehia Muzayid, a cleaner at the market who was injured and who lost 16 family members in the attack, shared his chilling testimony with Human Rights Watch:

"When the first strike came, the world was full of blood. People were all in pieces, their limbs were everywhere. People went flying. Most of the people, we collected in pieces, we had to put them in plastic bags. A leg, an arm, a head.

There wasn’t more than five minutes between the first and second strike. The second strike was there, at the entrance to the market. People were taking the injured out, and it hit the wounded and killed them. A plane was circling overhead.

I was helping to remove the dead, trying to pick a man up to see who he was. Then the second strike hit. Shrapnel hit me in the face. After the second strike, I just ran away. The shrapnel cut my lip and inside my mouth, I lost these teeth."

Another Mastaba resident told the U.N. he lost 17 family members in the bombing.

A local medical clinic supported by Doctors Without Borders said it helped treated 45 civilians who were wounded in the attack on the market.

Around 10 Houthi fighters may also have been killed in the attack. Saudi authorities and the Saudi-backed Yemeni government made contradictory statements about the bombing, citing the alleged presence of Houthi militants.

"The laws of war prohibit deliberate attacks on civilians and indiscriminate attacks, which are attacks that strike military objectives and civilians or civilian objects without distinction," Human Rights Watch noted in its report.

"Attacks that are not directed at a specific military objective are considered indiscriminate," it added, noting an "attack is disproportionate if the anticipated loss of civilian life and property is greater than the expected military gain from the attack."

This was not the first time the coalition launched airstrikes in the area in and around Mastaba. Over the past eight months, the coalition carried out at least six attacks.

Human Rights Watch has documented airstrikes on at least 11 other marketplaces across northern Yemen.

On May 12, 2015, the coalition bombed a marketplace in the town of Zabid, on the western coast, killing at least 60 civilians.

On July 4, 2015, the coalition bombed a marketplace in the town of Muthalith Ahim, in the northwest, near Mastaba, killing at least 65 civilians.

“Even after dozens of airstrikes on markets, schools, hospitals, and residential neighborhoods have killed hundreds of Yemeni civilians, the coalition refuses to provide redress or change its practices,” Motaparthy added. “The U.S. and others should pull the plug on arms to the Saudis or further share responsibility for civilian lives lost.”

Human Rights Watch has documented 36 illegal airstrikes, some of which may amount to war crimes. At least 550 Yemeni civilians were killed in these attacks.

In 15 of these attacks, Human Rights Watch has documented coalition use of internationally banned cluster munitions, which led to the killing or wounding of civilians.

The coalition has used at least six types of cluster munitions in at least five of Yemen’s 21 governorates, according to the human rights organization.

A total of 118 countries around the world have signed the Convention on Cluster Munitions, the 2008 international treaty that bans cluster munitions. The U.S. and Saudi Arabia, among others, have refused to sign it. Human Rights Watch has called for an immediate halt to the use of cluster munitions, and requests that coalition members join the convention.

Perhaps the most alarming findings come from a 51-page report by the U.N. Panel of Experts on Yemen, released in January, which “documented 119 coalition sorties relating to violations” of the laws of war.

"The coalition’s targeting of civilians through air strikes, either by bombing residential neighborhoods or by treating the entire cities of Sa‘dah and Maran in northern Yemen as military targets, is a grave violation of the principles of distinction, proportionality and precaution," the U.N. panel found.

It added, "In certain cases, the Panel found such violations to have been conducted in a widespread and systematic manner."

The U.N. Panel of Experts on Yemen documented coalition attacks on “camps for internally displaced persons and refugees; civilian gatherings, including weddings; civilian vehicles, including buses; civilian residential areas; medical facilities; schools; mosques; markets, factories and food storage warehouses; and other essential civilian infrastructure, such as the airport in Sana’a, the port in Hudaydah and domestic transit routes.”