Boycotts won't save Mississippi: Hollywood helped kill Georgia's anti-LGBT bill, but this state might have nothing left to lose 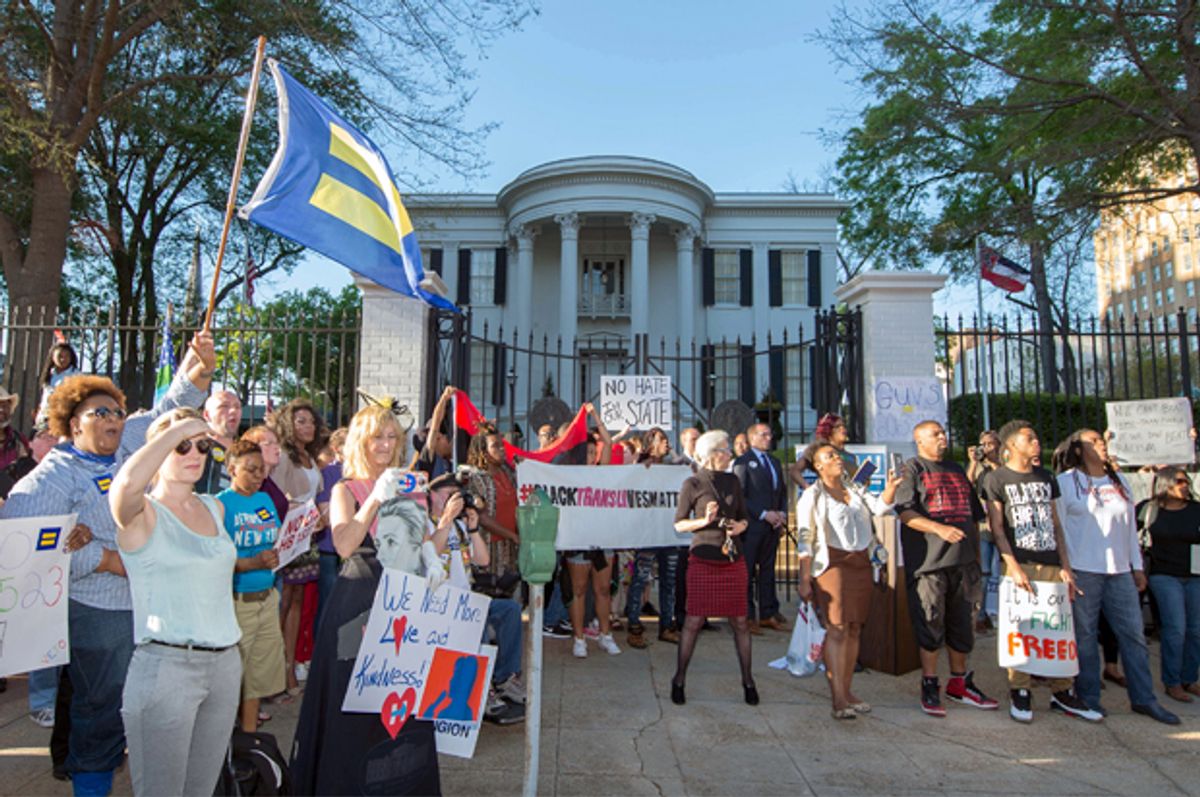 Protesters against House Bill 1523, outside the Governor's office in the state Capitol in Jackson, Miss, April 4, 2016. (AP/James Patterson)
--

Mississippi is officially first in the nation in bigotry. This week, the state rode a wave backlash against LGBT rights in passing a “religious liberty” bill, one that could prove to be the most harmful anti-LGBT legislation yet. The bill allows businesses and employers to discriminate against queer and transgender people based on “sincerely held religious belief or moral conviction.” This means that restaurants can deny service to LGBT customers, employers can fire workers (or decline to hire them to begin with) based on sexual orientation or gender identity, and county clerks can refuse to sign the marriage certificates of same-sex couples. In addition, doctors can deny lifesaving treatment or transition-related care to trans patients.

House Bill 1523, signed into law by Republican Gov. Phil Bryant on Tuesday, allows for a smorgasbord of religious-based discrimination. In addition to targeting the state’s LGBT citizens, the law goes after unmarried couples and women in the workplace. Under HB 1523, it would be perfectly legal for a boss to fire his female employees for wearing pants in the workplace or not putting on makeup. And as ThinkProgress reports, the bill even allows businesses to discriminate against “those who have sex before marriage.” HB 1523 becomes official policy on July 1.

Mississippi represents the biggest challenge yet for the fight against anti-LGBT legislation in the United States. Although pressure from Hollywood and Wall Street has been a major boon to gay rights activists, Mississippi’s HB 1523 may illustrate the limits of business backlash. When you have very little for corporate America to boycott, what exactly can companies do to make the difference? In the case of a state like Mississippi, one of the poorest in the nation, conservative lawmakers simply have nothing left to lose.

The Magnolia State is just the latest state to pass legislation against the LGBT community. On March 23, North Carolina passed House Bill 2, which repealed local nondiscrimination ordinances in the state. Among its many other stipulations, HB 2 forces trans people to use the restroom that corresponds with the sex they were assigned at birth, not their gender identity. To use the restroom as a trans person in North Carolina means choosing between breaking the law and your personal safety, as walking into the men’s room in a high heels and a dress could be life-threatening.

That bill, called a “national embarrassment” by the state’s own attorney general, has proven extremely controversial. In the weeks since it was passed, 120 major corporations have called for a boycott against the state, including Apple, Microsoft, American Airlines, and Dow Chemical. The NBA has threatened to block North Carolina from hosting the All-Star Game, scheduled to be played in Charlotte in 2017. On Tuesday, PayPal announced it would be mixing a $3.6 million expansion into the state. Meanwhile, “Wicked” composer Stephen Schwartz pledged to refuse to allow productions of his musicals, which also include “Godspell” and “Pippin,” to be performed in North Carolina. In an open letter, he urged other Broadway producers to join him in the boycott.

In the case of Georgia, widespread protest from corporate America, particularly the entertainment industry, proved crucial in killing its own religious freedom bill. On March 28, Gov. Nathan Deal vetoed House Bill 757 following opposition from studios like Disney and Marvel. The state, which is the third-most popular shooting location in the U.S., is home to major franchises like “The Hunger Games,” “Iron Man,” and “Ant-Man,” all of which have been filmed in the state. Often called the “Hollywood of the South” or “Y’allywood,” Georgia’s booming film industry brought in a reported $5 billion in 2015.

Film studios had similar leverage in North Carolina, which was ranked back in 2014 as the nation’s 10th biggest most popular shooting location. Currently, Lionsgate is filming “Dirty Dancing” in the state, and after the passage of HB 2, the company said the discriminatory law would affect the decision to shoot future productions in North Carolina. That threat proved anything but hollow on Monday, when the studio announced that it would be pulling the production of Hulu’s “Crushed” from the state.

The corporate and media backlash against North Carolina has proven enormously effective at making the state into an example of the costs of discrimination—as well as pushing for the repeal of HB 2. After all, boycotts worked in Indiana. Last year, the Religious Freedom Religious Freedom Restoration Act, nearly identical to the legislation proposed in Georgia, cost the state an estimated $60 million. Indiana is home to a number of yearly conferences—including the Gen Con, the largest gaming convention in the U.S. In total, 12 conferences pulled out of the Hoosier State after the bill was passed in March. That loss in revenue forced Gov. Mike Pence to amend RFRA, excising language that allowed for anti-LGBT discrimination.

That’s very unlikely to be the case in Mississippi. The state might be leading the nation in anti-LGBT prejudice, but it’s last in, well, everything else. The Magnolia State’s economy ranks 51st in the country (that includes Washington D.C.). For instance, the median household income in Mississippi was just $39,680 in 2014, compared to the national average of $53,657. According to a USA Today report, nearly a quarter of the state population (695,915 people) lived under the poverty line in 2013. It also ranks near the bottom in unemployment.

Needless to say, there isn’t a lot of business to threaten to pull. Although “The Help” was famously filmed in Jackson’s Fondren district, very few TV and film productions have been shot in Mississippi. “Same Kind of Different As Me,” starring Renee Zellweger and Jon Voight, just wrapped, as did “The Hollars,” directed by John Krasinski of “The Office.” Both were low-profile and low-budget. According to The Wrap, Mississippi’s film production office doesn’t list a single upcoming feature on its calendar. Heavy-hitters like Disney and Marvel have yet to come out against Mississippi’s bill, and neither has any other major studio.

A corporate boycott may prove equally troubled. Although ThinkProgress notes that companies including Nissan, MGM Resorts, Toyota, Levi, Tyson, and Mississippi Manufacturers Association have all issued press releases about the bill, that’s much smaller than the outpouring of criticism aimed at North Carolina and Georgia. And even those businesses may have little sway. For instance, the New Orleans Times-Picayune reports that Levi has a “350-employee distribution center in Canton,” but the state may decide that jeopardizing a handful of jobs is worth the sacrifice.

Who else will join them? It’s difficult to say. While Microsoft, Salesforce, and IBM condemned HB 1523 on Twitter, not a single Fortune 500 company calls Mississippi home. Few tech firms even have much of a relationship in the state, as the state places in dead last in the Information Technology and Innovation Foundation’s tech industry ranking. Following the passage of Indiana’s RFRA last year, Apple CEO Tim Cook, who is openly gay, vowed to do his part to fight anti-LGBT legislation across the country in a Washington Post op-ed. “America’s business community recognized a long time ago that discrimination, in all its forms, is bad for business,” Cook wrote. However, even the biggest company in the world may be no match for Mississippi.

If North Carolina’s Gov. McCrory appears to be backed into a corner, criticism from the handful of companies that have condemned Mississippi’s bill appears to have only made its lawmakers more resolute. Rep. Andy Gipson, who helped push the bill through the state legislature, argued that the business backlash indicates the reason HB 1523 is so necessary. “It shows why we need this bill, so people can not only believe what they believe, but act in accordance with their beliefs and not violate their conscience,” he told the Times-Picayune.

Lacking a clear path forward, the only solution to the Mississippi situation fighting HB 1523 the old-fashioned way—through political and legislative action. After North Carolina’s bill was signed into law, the American Civil Liberties Union filed a federal lawsuit to challenge it, while local LGBT rights groups—including Equality North Carolina and the Human Rights Campaign—are pushing to get McCrory out in the 2016 elections. He faces a difficult race in Roy Cooper, the aforementioned Attorney General refusing to defend HB 2 in court. A grassroots effort from local advocates could push Cooper over the top in November.

Even more so, Mississippi illustrates the profound need for federal action on the issue of nondiscrimination protections for LGBT individuals. The Equality Act, introduced to Congress in 2015, would extend the Civil Rights Act of 1964, which currently prohibits discrimination on the basis of race, gender, and nationality, to cover sexual orientation and gender identity. The legislation is currently supported by President Obama and presidential frontrunner Hillary Clinton but faces a tough battle in a Republican-dominated Congress. Currently, 60 companies—including Amazon, Coca-Cola, American Airlines, and Nike—have voiced their support for the legislation. Other businesses should follow suit.

Focusing our efforts on individual states like Mississippi—or the other states considering their own anti-LGBT legislation—won’t work if the free hand of the market is unable force the hands of bigoted conservative state lawmakers. It’s nice to see Hollywood and corporate America stand up to discrimination, but our national government needs to ensure that these Republicans don’t have the ability to legislate hate to begin with.