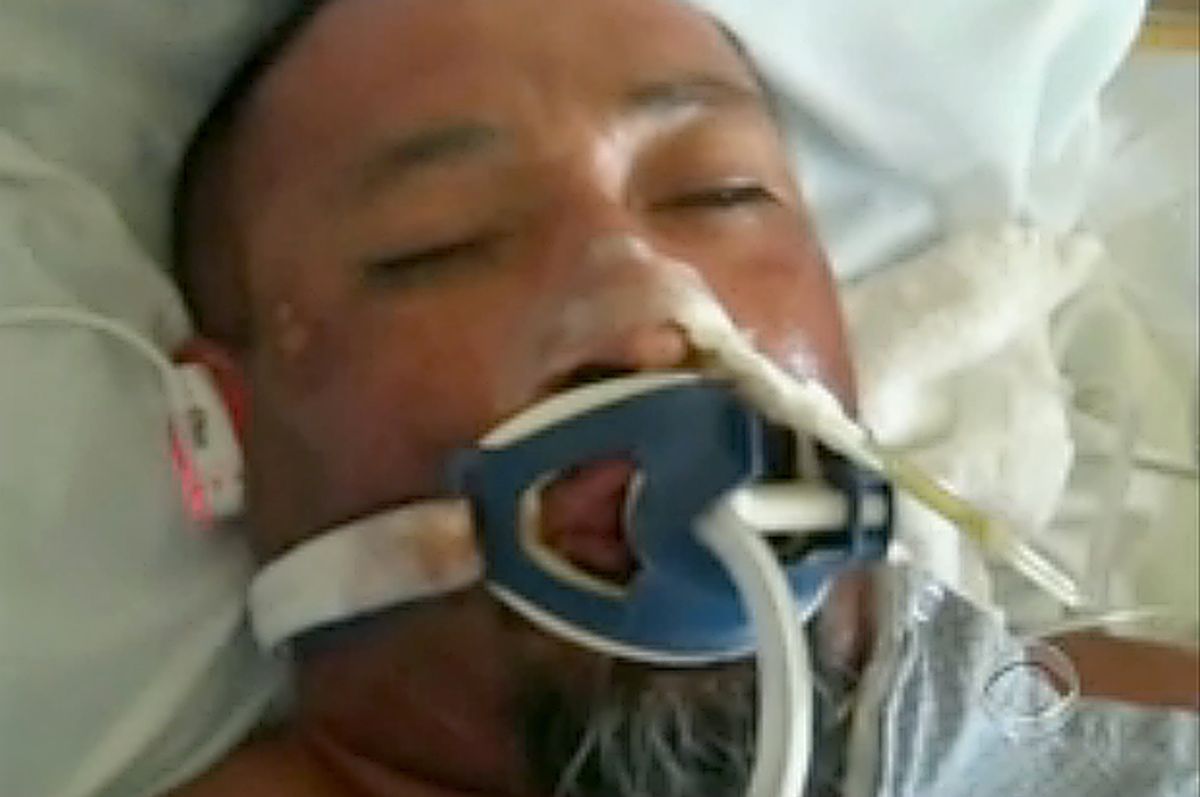 The family of a longtime U.S. resident is suing the government on charges of torture and excessive force, but the case has gotten very little coverage in the American media.

Anastasio Hernández Rojas, 42, died after being beaten by U.S. Border Patrol agents in May 2010. The father of five U.S.-born children had lived in San Diego for 25 years before he was deported. He was attempting to illegally cross back over the California-Mexico border and was on the U.S. side, in hopes of reuniting with his family, when he was stopped by agents from U.S. Customs and Border Protection, or CBP.

Instead of re-deporting Hernández Rojas, the CBP agents brutally beat and tasered the 42-year-old father as he lay on the ground in handcuffs, pleading for his life. Witnesses captured video of the horrific killing, although Border Patrol agents tried to destroy the evidence, according to his family's lawyer.

The San Diego coroner ruled Hernández Rojas' death to be a homicide. The medical examiner said he had a heart attack and had been subjected to "bruising to his chest, stomach, hips, knees, back, lips, head and eyelids; five broken ribs; and a damaged spine."

The man's family has fought for justice for almost six years. Their lawyer says the Department of Justice dragged its feet, pushing back the investigation for years.

In November 2015, the DOJ closed the investigation into the case, claiming there was not enough evidence to file federal criminal civil rights against the CBP agents.

Before his death, Hernández Rojas had ingested methamphetamine. Citing the medical examiner, the DOJ claimed he "would not have died had there not been methamphetamine intoxication." The DOJ did not, however, mention in its statement that the coroner found Hernández Rojas' death to be a homicide.

"Acute methamphetamine intoxication, pre-existing heart disease, the level of physical exertion during the struggle, the electro-shocks from the taser and positional restraint were stated as contributory factors in Hernandez-Rojas’ death," the DOJ wrote. It also insisted that the man had been combative at the time of his death.

Hernández Rojas' family strongly rejects this version of the story. In response to stonewalling, they say they have no choice but to sue the U.S. government. On March 30, they filed a petition with the Inter-American Commission on Human Rights.

Almost no English-language U.S. media networks covered the story. Democracy Now was one of the few news outlets to interview Hernández Rojas' family.

Salon spoke with Roxanna Altholz, who is representing Hernández Rojas' family in the case. Altholz, associate director of the International Human Rights Law Clinic at the University of California, Berkeley School of Law, says Hernández Rojas' family is suing the U.S. government on charges of torture, excessive use of force and conducting a criminal investigation that lacked impartiality and independence.

"Under international law, international bodies don't have jurisdiction over cases unless the national, domestic legal system fails in some way," Altholz explained.

"That is the core of our case. The criminal investigation was not independent, was not impartial and was delayed," Altholz said.

"The Department of Justice Civil Rights Division did not intervene in this criminal investigation until two years after the incident. Under any standard, that is ineffective and delayed, and unjustifiably so."

CBP repeatedly kicked and punched Hernández Rojas as he lay handcuffed on the ground, tasing him four times as he plead for his life. In its investigation, however, the DOJ insisted that the CBP agents had used reasonable force.

Video footage of the incident can be seen in Democracy Now's coverage of the story:

Another video can be seen here, courtesy of Democracy Now, which depicts Hernández Rojas screaming for help as he was being brutally beaten:

Border Patrol agents initially claimed Hernández Rojas was hostile and resisted arrest. But when video was later released, it proved that this was false.

The beating took place in an area known as Whiskey 2, a passing that goes under a pedestrian bridge. When bystanders heard Hernández Rojas yelling and screaming, at least 30 and as many as 50 witnesses gathered on this bridge.

Many used cellphones and cameras to take photos and video of the altercation.

The Border Patrol agents heard the witnesses screaming from the pedestrian bridge, yelling "Stop! He's not resisting!" CBP agents subsequently went up to the bridge and dispersed the eyewitnesses without recording their contact information, making it difficult for them to later be found for testimony.

U.S. authorities then seized the cellphones and cameras of some of the witnesses and erased the video and images, in what Altholz says is a blatant violation of CBP policy and international standards.

"This is physical evidence of a homicide, but they just erased the images," she told Salon.

Two witnesses hid their phones and managed to hold on to the video. Because of this, they held on to two videos of the incident.

One of the witnesses who was able to hold on to the footage, Ashley Young, a 21-year-old young girl from Seattle on spring break in California, recalled being "traumatized," Altholz said.

In an interview, Young, recalled in terror, "I had just witnessed a murder." The young woman was so scared that it took her two years to come forward and release the video.

The other witness posted his video online in early June, less than two weeks after Border Patrol killed Hernández Rojas.

CBP did not inform the police department about the incident until the next day, so police did not show up until 4 p.m. next day, at which point they took control of the crime scene.

"The hours after a homicide are the most crucial hours of an investigation," Altholz explained. "What happened in the hours after his beating was that the very agents responsible for the beating had control of the crime scene."

Yet, even when police investigators showed up, the lawyer says they did not fulfill their duties.

Altholz expressed frustration with what she said was a thoroughly biased investigation. Police detectives are supposed to identity witnesses. "This is their job," she explained. "But these two witnesses were identified by the media and NGOs, which I think is compelling evidence that the police weren't doing their jobs."

She accused police investigators of leaving "the crime scene in the hands of the CBP agents who committed this beating."

They interviewed agents who were involved in or witnessed the beating. In the agents' original account of the incident, none of them mentioned the use of force against Hernández Rojas. They claimed he was belligerent and combative. They did not know, at this point, that any video footage of the incident had survived; Border Patrol assumed it had destroyed all of the evidence.

Police detectives interviewed more than 30 CBP agents who were involved in the incident. Yet, while there were 30 to 50 people who witnessed the incident from the bridge, the authorities only interviewed three civilian eyewitnesses, and only then after the man posted the video on the internet almost two weeks later.

"Their investigation was really about documenting the law enforcement version of events, not really seeking the truth of what happened and talking with impartial, independent witnesses," Altholz said.

Since closing the case, federal authorities have told Hernández Rojas' family and lawyer that they will only reopen it if some kind of new evidence materializes.

There has been little transparency in the wake of the killing, and no agents have faced disciplinary action.

In fact, in Border Patrol's 90-year history, not a single agent has ever been punished for a death, Altholz said.

She accused the CBP, which is the largest law enforcement agency in the country, of having "some of the worst policies around oversight, transparency, accountability and use of force."

"It is crucial to understand what is happening at the border, in order to reform law enforcement," Altholz said. "Federal authorities must clean their house before they can tell local and state police forces what they should do."

"The United States is struggling to reform law enforcement so that people of color are not killed with total impunity," Altholz told Salon.

"Every month there is another death. So when you don't investigate, when individuals responsible for excessive use of force aren't held accountable, you're basically declaring open season on border communities," she added. "And so we expect killings to continue until CBP agents are held responsible."

The human rights lawyer says Hernández Rojas' family has "been left with no choice but to sue the United States, given how miserably the domestic criminal investigation failed."

The Inter-American Commission on Human Rights is the only international body with the authority to consider cases against the United States that allege violations of individual human rights. As a member of the Organization of American States, the U.S. must comply with the American Declaration on Human Rights.

The U.S. has not ratified the American Convention on Human Rights, so the case cannot be brought to the Inter-American Court of Human Rights, but Altholz feels the commission will be able to have some kind of effect.

There has never been a case of this kind filed against the U.S. This is the first case involving a border killing by U.S. enforcement to be brought before the commission. The commission has considered cases involving the U.S. government's use of the death penalty and its application to people who are mentally disabled or who are juveniles.

The majority of the tribunal's cases involve extrajudicial killings, massacres and torture.

Altholz says she hopes the filing can help bring the U.S. a step toward justice. She also hopes the case requires the U.S. to apologize and publicly recognize wrongdoing.

"My clients want to see that no other family suffers what they have suffered, the anguish and the pain. In order for that to be so, the United States must enact serious reforms, structural and legal reforms, to CBP's use of force and accountability systems."

"It is crucial that agents that commit these kinds of crimes, that use force excessively, be held accountable," Altholz continued. "Unless the United States holds agents accountable for excessive use of force, they are allowing them to continue committing these crimes; they are signaling that violence against the most disenfranchised and vulnerable members of our community is permissible."

The lawyer noted that this story got a lot of coverage in the Spanish-language media, but almost nothing in the English-language U.S. press.

To Altholz, this is yet another tragedy, because this case is much more important than many people realize.

Attaining justice for Hernández Rojas' death  "is really important, given the extraordinary jurisdiction of CBP, that people understand the kind of violence and impunity that they have been engaged in," Altholz told Salon.

CBP authority extends 100 miles from the borders and the coasts, meaning approximately 80 percent of the population of the country is under CBP authority. This includes some of the largest U.S. cities, including Los Angeles, New York, Miami and more.

"This is the largest law enforcement agency in the country," Altholz stressed. "It has a huge impact on everyone's lives if they are allowed to operate with impunity."