For Ann Coulter, it's OK when Republicans cheat on their wives: Right-wing bigmouth's justifications for Trump's adultery shines light on the sexual double standard 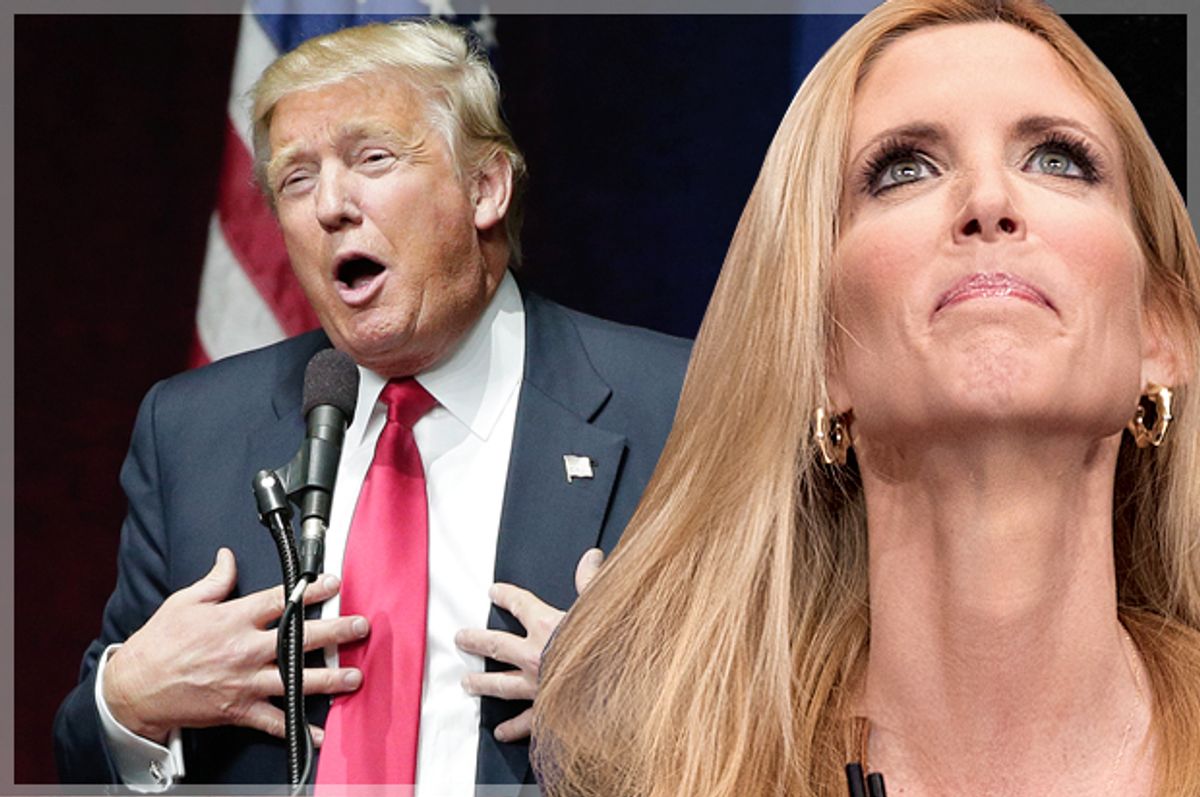 While everyone is riveted to the grudge match in the Democratic primary, the Republicans continue to show that they are the absolute masters at meaningless gotchas and bizarre rationalizations. Ann Coulter, who has been going hard for Donald Trump this campaign, took it upon herself recently to try to defend him from his not exactly secret past of enthusiastically committing adultery.

She was on a talk show with host Eric Metaxas to push her idea, which is so shameless it's painful to type it, that God chose Trump specifically to save the world from 1,000 years of darkness. To bolster her claim that he's a holy savior sent by the Lord, Coulter cited Trump's teetotalism, apparently mistaking the year for 1916 instead of 2016.

At that point, trying to buy this line about Trump being a noble virtuous servant of the Lord got to Metaxas, who said, "His vice of choice was adultery."

Lying is also a sin, Ann. You know as well as everyone else on the planet that Trump doesn't even really bother denying it, and it might be the most well-documented adulterous affair besides Bill Clinton's.

"You know where he met Marla Maples?" Coulter continued. "I haven’t really followed his personal story very closely but he met her in church.”

Leave it to Ann Coulter to try to spin it as virtuous to be such a cheating rat that you think it's appropriate to cruise for women behind your wife's back at church.

Coulter then emphasized that they often went to church together, which is true enough, but she leaves out a pertinent detail: He was rendezvousing with Maples at church because he needed to find places and times where he could have sex with her without raising his wife's suspicions. Again, hard to imagine Jesus, who spoke pretty strongly against adultery (while staying mum on abortion and homosexuality) would approve.

Writing about Coulter is always a dicey proposition, because she's such an unabashed charlatan that any criticism of her seems really beside the point, but these quotes seemed worth flagging because it speaks to some of the larger issues at stake here when it comes to the Republicans and their reliance on Christian conservatives to build their voting base.

After all, Trump has shamelessly trolled Ted Cruz about adultery rumors in an unsubtle bid to run Christian conservatives off the Cruz campaign. It was an effective move for about five minutes, and then everyone remembered that no one bests Trump when it comes to being a lech. So now you have Coulter out there, trying to make it sound like cheating on your wife in a church is perhaps the purest way to worship their lord and savior, Jesus Christ.

It's all very funny — right-wing drama usually is — but there's a sour aftertaste to all this, because it all just drives home how much the conservative Jesus chatter is mostly hot air to disguise the true, sexist agenda. Coulter's full-throated apologia for adultery comes right on the heels of her declaring it was "fabulous" of Trump to say that women should be punished for abortion. The double standard here is stark. Trump, a man, is forgiven for doing something expressly forbidden by the faith he and Coulter claim to share, something that he doesn't seem particularly sorry about and which hurt his wife and children. Women who abort, often to protect their families, haven't done anything wrong (which is why most anti-choicers try to pretend they don't want to punish women), but they are treated like the bad guys anyway.

It would be one thing if this was just Coulter spouting off and trolling people, which is what she does because there's something deeply wrong with her. But she's just saying what a huge chunk of Christian conservatives already believe. After all, Trump's history is not some dark secret just come to light. He conducted his affair so publicly it verged on getting him cited for public indecency. A whole bunch of Christian conservatives waxing poetic about the sanctity of marriage and the virtues of abstinence are happily supporting Trump.

That's because it was never about some kind of strict adherence to a rigid, though illogical, sexual morality. It's about using sex and religion as weapons to bash women and LGBT people. Straight men can get up to whatever they want, because this is about protecting their privileged status. And Trump is the living embodiment of the true nature of the conservative agenda on sexuality.