Melissa McCarthy deserves better than this: "The Boss" is a fun character in search of a halfway decent movie

McCarthy is game for anything this mediocre comedy throws at her, but she shouldn't have to be 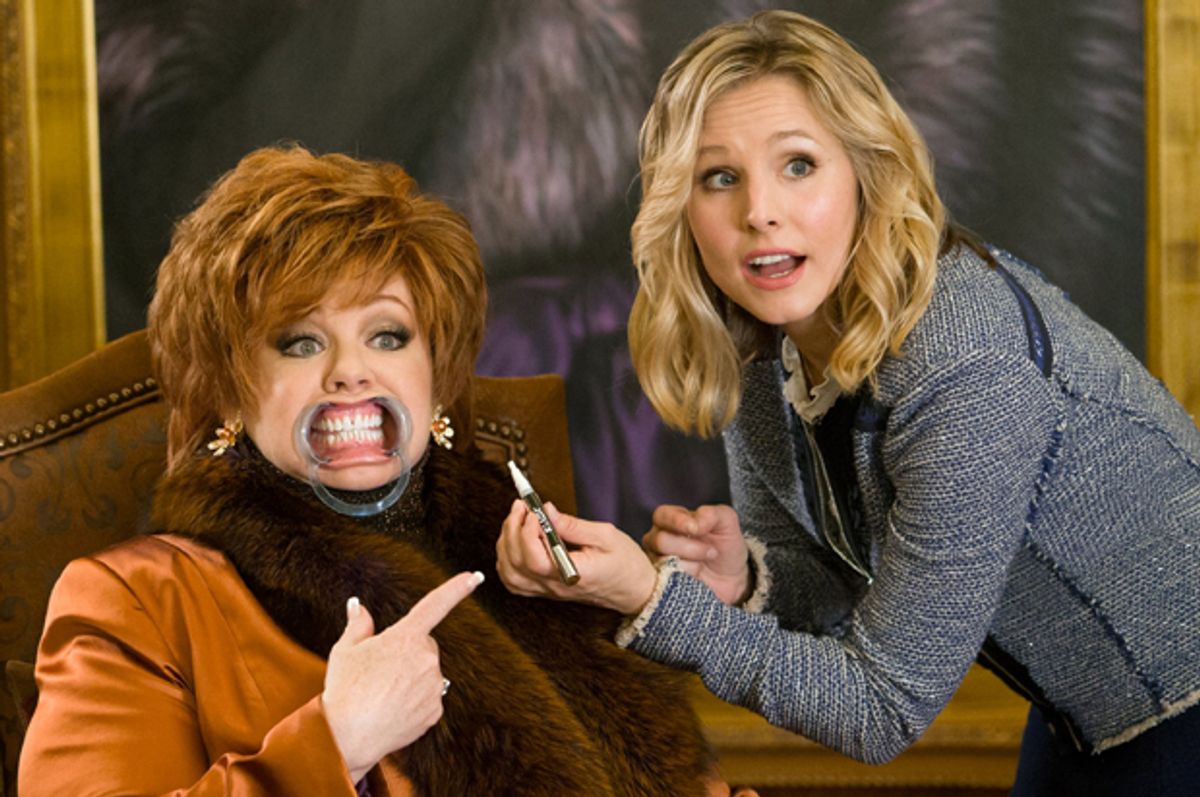 Melissa McCarthy and Kristen Bell in "The Boss" (Universal Studios)
--

“The Boss” is a very funny idea for a movie. Melissa McCarthy should know: She’s had it for 15 years.

She plays Michelle Darnell, a character developed during her days as a member of The Groundlings, the L.A.-based comedy troupe. Darnell is a wealthy businesswoman, the 47th most successful in America; she’s Martha Stewart meets Suze Orman, with a little bit of Kanye West thrown in. In the film’s opening minutes, Darnell descends into an appearance at the All-State Arena on the back of a gold phoenix that shoots fireworks. She duets with T-Pain. She dispenses cold, cutthroat advice to her band of loyal fans on how to get rich. Other people are just extra carry-on items weighing you down, she argues. To fly, you have to leave them behind.

Darnell, however, experiences her own turbulence: She’s turned in by a rival CEO and former lover (Peter Dinklage) for insider trading and spends five months in prison. When she gets out, she finds that her former colleagues, especially those she screwed over in making it to the top, are not so willing to forgive. In order to mount her comeback, Darnell teams up with her long-suffering ex-assistant (Kristen Bell) to form a brownie empire, like the Girl Scouts but with attitude. If you don’t buy a brownie, there will be consequences.

This all sounds like a terrific pitch for a movie, but “The Boss” is more fun to recap than it is to actually watch. Michelle Darnell, a bottle ginger with a foul mouth who favors designer ponchos and chin-slimming turtlenecks, is an inspired creation, but like an old pair of mom jeans, the movie around her never does her any favors. Aside from brief, inspired moments, it rarely translates to anything that actually works onscreen.

The issues begin behind the camera. “The Boss” is the second directorial feature from Ben Falcone, who also happens to be McCarthy’s husband. His last effort was the poorly reviewed “Tammy,” and Falcone has learned little in the years since. No one expects studio comedies to be “In the Mood for Love,” but “The Boss” lacks even basic professionalism, filmed with the sheen of a low-rent “Real Housewives” knockoff. Shots are often slightly to the right of where they should be, as if Falcone thought getting the actors into the frame was enough. The film’s title card is so embarrassing it needs to be seen to be believed.

Unfortunately, its director’s lack of finesse is a feature, not a bug. “The Boss” repeats the same exterior shots ad nauseam, a common staple of sitcom filmmaking (see: “Friends,” “Will and Grace”). Should we want to announce that Rachel and Ross are sharing a cup of coffee at Central Perk, that repetition serves to establish our familiarity with the environment. On the big screen, however, the directorial choice is more reminiscent of Tommy Wiseau’s “The Room.”

That Achilles heel serves to sabotage “The Boss” at every turn. Sight gags, like a bit about Darnell generously applying self-tanner, are introduced and immediately abandoned. After applying enough bronzer to paint an Oscar statuette, shouldn’t she look like an Oompa-Loompa in the next scene? When all else fails, as it does so very often, her director chooses to throw his leading lady down a flight of stairs or fling her against a wall. It’s clear that the always game Melissa McCarthy, who famously ate an entire container of Hidden Valley Ranch Dressing on “SNL,” will do literally anything to get a laugh, but she shouldn’t have to.

What’s equally confusing is the egregious waste of talent on screen. “The Boss” has an enviable cast, one that also includes Kristen Schaal, Kathy Bates, Margo Martindale, and Kristen Bell, but the film doesn’t give them anything to do or Darnell anyone to spar with. The supporting players largely function to stand around while Darnell steamrolls over them. During a meeting at a rival Girl Scouts’ troop, Darnell goes toe-to-toe with Annie Mumolo, playing a helicopter mom who objects to the presence of a convicted felon in the meeting. (Honestly, it’s a fair point.)

There’s never a question, however, of which of these women would win in a fistfight, and when a confrontation between the two ends in an all-out brawl, the result is a foregone conclusion. You can only watch McCarthy insult people and knock heads together so much before you long to see her do more. You find yourself wondering: Is this all there is?

It’s nice to see Melissa McCarthy in a movie where she’s not playing a sadsack who is the butt of every joke (see: “Identity Thief”), but “The Boss” fundamentally misunderstands her strengths as a comedian. McCarthy, who never met a woman she couldn’t find the wounded humanity in, is a character actress at heart. Her best performances were in the Paul Feig-directed “Bridesmaids” and “Spy,” in which she was allowed to riff off an ensemble. Kristen Bell, who is still waiting for a decent movie role, would kill for a part like the one Rose Byrne got to play in “Spy”: a mobster’s daughter who favors loud leopard-print body suits and spits insults like it’s her job.

If McCarthy and her collaborators have thought deeply about who Michelle Darnell is, they forgot to apply the same amount of care and diligence to, well, anything else. It’s understandable why McCarthy would want to make a movie vehicle for a character she’s known and loved for over a decade. They made the vehicle, but Darnell is still waiting for an actual movie.