Only years later, law students have tough questions for President Obama about drones and diversity 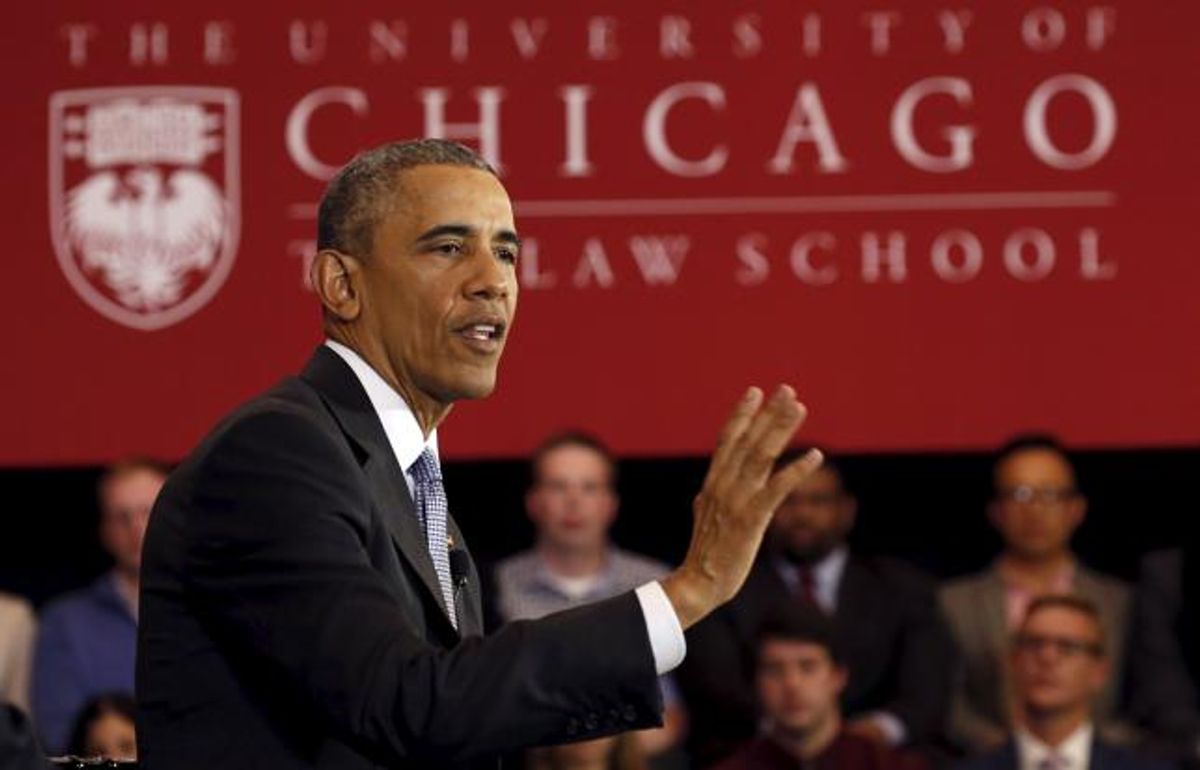 U.S. President Barack Obama speaks about the Supreme Court to students at the University of Chicago Law School, where Obama taught constitutional law for over a decade, in Chicago April 7, 2016. REUTERS/Kevin Lamarque (Reuters)
--

President Obama returned to familiar stomping grounds to continue his campaign to pressure Senate Republicans to do their jobs and hold hearings for a successor to Supreme Court Justice Antonin Scalia on Thursday.

Speaking to 250 law students and faculty members at a nearly 90-minute town hall at the University of Chicago, where he taught constitutional law for 12 years, the president focused the push for nomination hearings on Merrick Garland, his third Supreme Court pick, but also discussed a wide array of topics that included his defense of drones, Republicans' push to strip away voting rights and the current state of the race to replace him.

The president's first question came from former colleague and University of Chicago law professor David Strauss, who asked him whether liberals should be disappointed in his choice of a centrist.

"Merrick Garland is an extraordinary jurist who is indisputably qualified to serve on the highest court of the land and nobody really argues otherwise," Obama said, defending his selection of the chief judge of the United States Court of Appeals for the District of Columbia Circuit. The president argued that contrary to calls from activists on all sides, the role of the Court is only rarely to engage in broad societal change. “The courts are a terrific shield; they are not always a very effective sword,” he reminded the law students, arguing that he selected the Chicago-born Garland because he believed it was a "good moment to have somebody who is respected by both sides" up for consideration.

When pressed by a student to explain how Garland's appointment positively impacts diversity on the Court, Obama quipped, "Well, he's from Skokie," before defending his record on diversity.

"Yeah, he’s a white guy, but he’s a really outstanding jurist. Sorry,” Obama said of Garland, 63. "At no point did I say: 'Oh, I need a black lesbian from Skokie in that slot ... can you find me one?’ That’s just not how I’ve approached it," Obama explained, noting that he had still managed to dramatically change the makeup of the federal court with diverse picks.

"The way I've thought about diversity is not to think about any single seat as 'I've got to fill this slot with this demographic,'" he elaborated. "But rather if I've got a broad set of nominees to make, and this is true across the board, how do I make sure that I'm intentional throughout that process so that the talent of every American, and every potential candidate, gets a fair look."

"Not to brag, but I have transformed the federal courts, from a diversity standpoint, with a record that's been unmatched," Obama added.

“Those in the Senate have decided that placating our base is more important than upholding their constitutional and institutional roles in our democracy in a way that is dangerous,” the president said, referring to Senate Republicans. “It’s not just that the Republican majority in the Senate intends to vote against a highly qualified judge,” Obama said. “We now have a situation where they’re saying we simply will not consider the nomination itself.” So far, only two Republican senators have even meet with Garland.

"What’s not acceptable is not giving him a vote, not giving him a hearing, not meeting with him," the president said of his chosen nominee. "What’s not acceptable, I believe, is the increasing use of the filibuster for someone who’s clearly within the mainstream. Or to essentially say that we are gonna nullify the ability of the president who is from another party from making an appointment. And we’re gonna wait to maybe see we can get a guy from our party to make the appointment."

Asked about using "vague legal standards" to conduct drone strikes that kill civilians, Obama acknowledged that when he took office, technology of the weaponry continued to advance faster than military commanders' rationale for using it, noting that despite his directive on drones, "there's no doubt some innocent people have been killed."

Still, he said, the rate of civilian casualties in drone strikes was less than in conventional war.

In perhaps his most controversial statements, the president appeared open to the idea of perfunctory voting in the U.S., citing Republican efforts to dismantle voting rights.

"We really are the only advanced democracy on earth that systematically and purposefully makes it really hard for people to vote,” Obama acknowledged, days after lines in the Wisconsin and Arizona primaries drew national headlines to draw historical parallels.

“There is no other country on earth that does that," he said. "There is a legacy to that that grows directly out of a history in which first propertied men, then white men, then white folks didn’t want women, minorities, to participate in the political process and be able to empower themselves in that fashion. That’s the history. We should be a society in which at this point we should say, yeah, that history is not so good.”

"At this point, we should be at the point where we say we want everyone to vote. That is the essence of our democracy," Obama said, citing a history of laws that denied the vote to women and minorities. "There's no justification for that. You can't defend it."

“Maybe the single biggest change that we could make in our political process that would reduce some of the polarization, make people feel more invested and restore integrity to the system is just make sure everybody is voting,” Obama said. “Australia has got mandatory voting. If you start getting 70 or 80 percent voting rates, that’s transformative.”

And because presidential politics have really heated up in recent days, especially on the Democratic side, Obama was asked to compare the negative campaigning on both sides.

"The cleavages inside the Democratic Party are not comparable to what we're seeing in the Republican Party right now," Obama answered, adding that Democratic divides are "more about means, less about ends." Still, he acknowledged that within both parties there is a deep anger shared over stagnant incomes and frustration at "a sense the game is rigged."