Most women hate Trump, but some are all too happy to go along with his ugly views on women 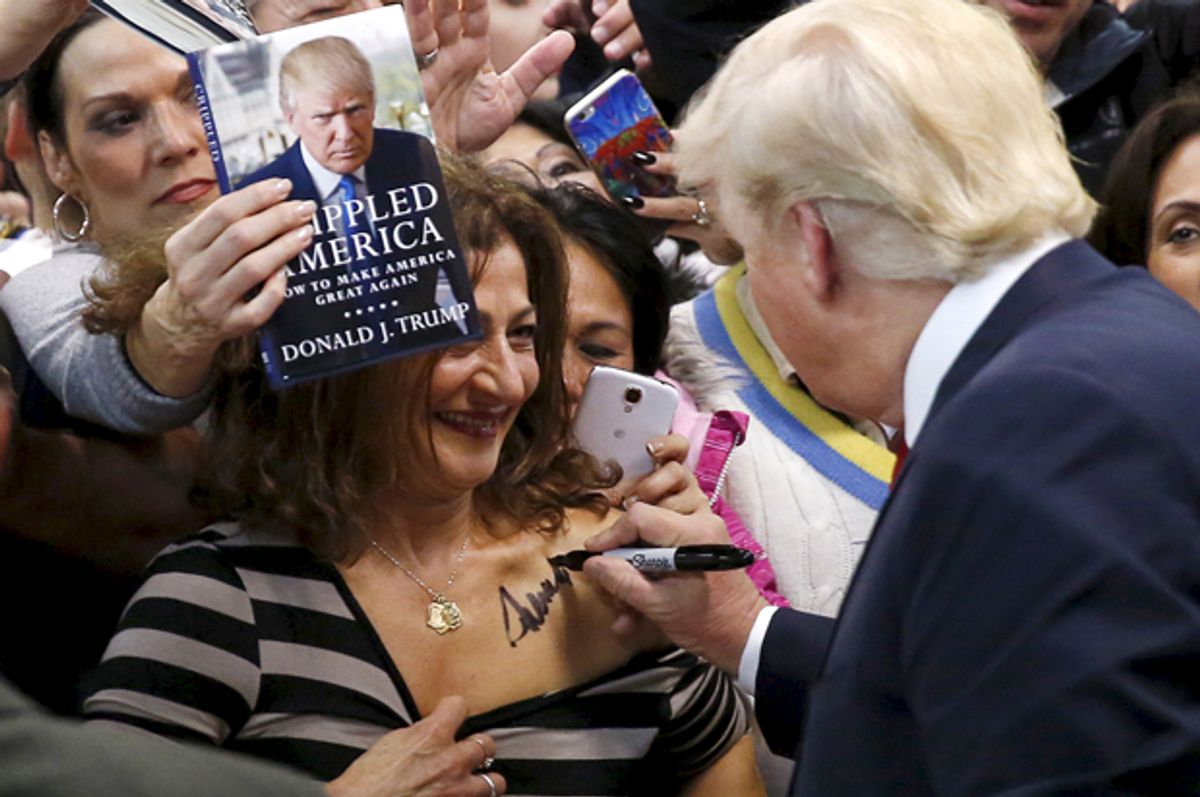 It's safe to say most women don't like Donald Trump. Polls show about 70 percent of women openly dislike the man, an unfavorability rating that far surpasses any other candidate/gender combination out there.

But, as Melissa Deckman for the Washington Post reminds us, Trump does have his female supporters. Amongst Republicans, Trump is nearly as popular with women as he is with men, with 41 percent of GOP women vs. 43 percent of GOP men citing him as their favorite presidential candidate. Deckman, who wrote a book on Tea Party women, suggests that these female voters are so invested in Trump's views on immigration and race that they're willing to overlook his misogyny.

As illogical as it might seem on the surface, many, many women share all manner of sexist and derogatory beliefs about women. Female misogyny has been central to the conservative movement for decades now. A reliable career path for a conservative woman who wants a career in politics is to be a spokeswoman for female misogyny, using her gender as cover to advance anti-feminist goals, such as stripping away reproductive rights, fighting women's equality in the workplace and even, disturbingly, undermining efforts to reduce sexual harassment and violence.

Since the '70s, when Phyllis Schlafly was organizing efforts to stop the Equal Rights Amendment, to today, when many anti-choice leaders are women and Fox News has its own mostly female show whose purpose is excusing sexual harassment and bashing feminists, female anti-feminism has been a critical component of the right-wing ecology.

Not that this is just a cynical money and power grab by heartless women willing to throw other women under the bus (though some of it probably is). Anti-feminist female punditry works in no small part because a whole lot of women sincerely agree with sexist ideas.

The reason is that misogyny is almost never about some categorical hatred of women just for being women. It's about dividing women into two categories, good women and bad women, and then dumping all this bile and hatred on women who are deemed unworthy for whatever reason. Even blatant misogynists like Trump will swear up and down that they don't hate women, they're just bashing some women.

On its surface, this kind of logic doesn't seem so offensive. After all, we all accept that there are good people and bad people. Are feminists saying that women are somehow exempt from that? Of course not. The issue here is that women are being judged by unfair, irrational standards that are nothing like what we judge men by. What makes you a "good" woman in sexist thinking has little to do with whether you're kind or even smart, but has more to do with adherence to unfair gender norms.

Women are judged more by their sexuality or their submissiveness than their actual character. So someone gets more points for being a virgin or being a doting housewife than they do for being smart and talented at their job. Or, in the case of Donald Trump, women are judged by their adherence to his very narrow views of what constitutes fuckable, and the rest of us are a waste of oxygen.

Another measure, in sexist thinking, of how good a woman is also has to do with how much she puts up with this crap. Women who smile politely or giggle indulgently when men say sexist or derogatory things are "good," whereas women who talk back are bitches.

For women who are caught up in this way of thinking, it's very intoxicating to imagine that you're one of the good ones, and to reinforce your status as a Good Woman by ganging up on the supposedly bad ones. There are a lot of benefits to being a female sexist, from that rush of self-righteousness you get from calling some other woman a slut to getting male approval when you agree with sexist men around you that Trump's nasty jokes about women are all in good fun.

For a lot of women, especially those living around a lot of conservative men, agreeing with sexist community norms is just less stressful. No one likes being told over and over again that they have a mouth on them or that they're a bitch. But let's face it, a lot of women get a kick out of policing and putting down other women. They may not get the status of men, but they can at least feel like they're higher on the totem pole than some woman who flouts conservative norms about how women are supposed to dress, talk and behave.

The anti-choice movement in particular is stuffed to the gills with women, and it's not because they are dumb enough to actually believe the hype about an embryo being the same thing as a baby. It's because policing other women's sex and parenting behavior makes them feel good about themselves, like they are righteous and godly women trying to corral all those wayward sluts.

Of course, Trump mostly indulges in a different stripe of misogyny, one that's geared more toward pressuring women into being silent sex objects than pressuring them into being virginal blushing brides. But the same kind of pressures are in play. Laughing along with Trump's hateful slams on women to show how chill and able to hang you are, while sneering at other women for getting mad about it is a cheap and easy way to feel good about yourself at the expense of other women. Plus, sexist men congratulate you for it. They don't respect you, but that was never happening anyway, so you can see why some women might settle for condescending praise.

The good news is that there's a reason to think feminism is slowly seeping in and more women are rejecting this entire paradigm where men, especially sexist men, get to tell us what makes a woman good or bad. Instead of being able to bully the women of America into feeling bad because we don't fit  his stupid idea of what women should be, most American women are telling Donald Trump to shove it. That's progress, even if we still have a long way to go before everyone gets there.