Ignorance, racism and rage: The GOP's transformation to the party of stupid started long before Donald Trump 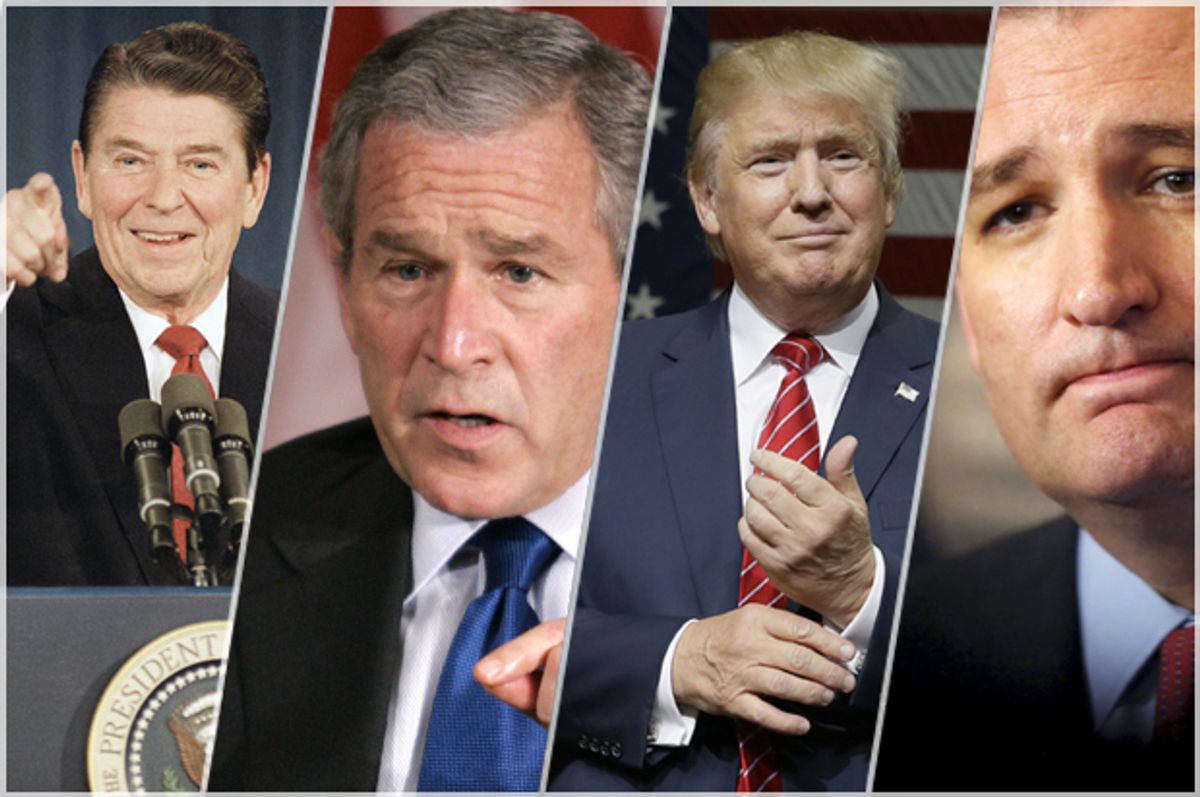 The top leadership of the Republican Party expresses horror at the popularity of Donald Trump as though his positions and values are somehow alien from their own. This is disingenuous. As other commentators have observed, the presidential candidacy of the bigoted, misogynist, ignorant Trump is a creature of the party’s own making.

This Frankentrump was not fashioned in a mere eight years, however. The Obama administration suffered only from an acceleration of Republican partisanship, not a change in its character. Instead, the transformation of the Republican base from the conscience-driven party of Lincoln to the anger-driven party of Trump has been a half-century in the making.

No political party neatly reflects political philosophy, of course. Parties always aim to mobilize diverse — and therefore conflicting — constituencies in order to win. But the original Republican Party, formed in 1854 after the Democrat-sponsored Kansas-Nebraska Act overturned decades of federal policy against the spread of slavery, came close to embodying the political philosophy behind it. And the founding Republican philosophy was liberal.

Not liberal in the sense the term came to be used in the twentieth century, to signify commitment to the type of federal welfare policies enacted in the New Deal of the Democrats. Not liberal as either epithet or fixed policy commitment. And certainly not liberal as in morally loose.

To be liberal in the nineteenth century meant to be devoted to freedom of thought above all. Above tradition, the American liberals who helped found the Republican Party valued the freedom to choose what is right and the freedom to develop socially, intellectually, and morally toward the highest possible potential. This is why liberals favored public schools for all children, which started in Massachusetts in the 1830s and only got established in the South thanks to Reconstruction.

The liberal principle of “moral agency,” as they called this divine right and duty to choose, also lay behind Republican opposition to slavery. Slaves cannot choose if they are coerced by their so-called masters, and if slaves have no moral choices they cannot develop. The liberal moral ethic centered on independent, open-ended thinking, constructive dialogue across differences, and a belief in the divine potential of every human being. Even slaves.

“Liberty of conscience” is how the Republican Party platform of 1856 gestured to its liberal roots. The phrase came from old Protestant arguments over whether Christians are free to believe non-Calvinist ideas, but it developed secular, political uses over the nineteenth century and lay behind the opposition to the expansion of slavery for which Republicans originally stood. Lincoln stated the liberal faith most robustly, perhaps, at the end of his famous Cooper Union Address of 1860: “Let us have faith that right makes might, and in that faith, let us, to the end, dare to do our duty as we understand it."

This got the Republican Party boycotted in the (white) South, not only during the years of the Confederate rebellion but long after.

Most Republicans, including Lincoln, were unsure just how equal African Americans could be, but some Republicans in Congress favored complete civil equality for the former slaves and their descendants. They drove the first civil rights legislation, including the 13th, 14th, and 15th Amendments to the U.S. Constitution, abolishing slavery and providing the rights of voting and due process under the law regardless of race. The first African-American members of Congress were Republican.

The Democrats ran the party of white supremacy. Woodrow Wilson — the Virginian who segregated the federal government — knew how to keep the South in the Democratic fold. So did Franklin Delano Roosevelt, who allowed his New Deal policies to be administered in such discriminatory ways that one historian claims they amounted to affirmative action for whites.

The Republican President Dwight D. Eisenhower is the leader who submitted civil-rights legislation to Congress to combat Jim Crow in 1957. It was Democrats in Congress who watered the bill down.

The partisan poles of the United States changed after the dramatic activism of the 1950s and early ‘60s prompted the Democratic President Lyndon B. Johnson to sign the Civil Rights Act of 1964, sending white Southern and white working-class Democrats into Republican arms.

The Republican wooing of these voters took time and delicacy. Never did its strategists aim to become the party of blatant racism. Instead, they created concepts like the “moral majority,” “religious right,” “family values” and even color-blindness in order to attract white voters concerned about African-American socio-economic and political gains. And in so doing, they betrayed their moral roots in three ways.

First, Republicans allowed bigotry safe haven under the guise of morality, in the very name of morality, by broadcasting scary tales of black urban life as though it were proof of the irredeemable inferiority of African Americans. From the Southern Strategy of Nixon to the cynical electioneering of Lee Atwater, the campaign manager for George H. W. Bush, the line was straight. In 1981, Atwater explained that by 1968, the N-word repelled voters rather than attracting them, so he trained Republicans to “say stuff like forced busing, states’ rights and all that stuff.” Reagan acted his part in disdaining welfare queens and “young bucks,” a phrase straight out of the antebellum South. In 1994, Charles Murray broadcast pseudo-scientific racism in "The Bell Curve" — amazingly, Murray is still in service today — arguing that so-called blacks simply are less intelligent and moral, if more athletic, than whites. Donald Trump’s retweets from white supremacist origins are consistent with this Republican precedent.

Second, the Republican Party adopted fixed positions on issues. The nineteenth-century liberal commitment to open-mindedness had meant that any position was only provisional, awaiting the testimony of further evidence or wider viewpoints for modification. For many decades now, the Republicans have insisted that lowering taxes, beefing up the military, and cutting social programs are what America needs. They oppose abortion because they need white evangelical voters, so Republican politicians claim that the resemblance of a fetus to a baby is more important than the resemblance of a criminal to a human being — Republicans favor the death penalty, after all, which they have to reconcile with their so-called pro-life conviction. Along comes Trump, calling for women who terminate their pregnancies to be punished.

Finally, the Republican Party has increasingly refused to engage in meaningful dialogue with its opponents. It has betrayed its origins in the culture of learning by attacking higher education in the United States — the colleges and universities all too liable to teach young people how to think critically — and by trying to privatize public education in the names of meritocracy and religious freedom. At the very least, Republican strategists have undermined public schoolteachers and pathologized urban schoolchildren. By deploying the language of culture wars, left versus right and liberal versus conservative, Republican strategists have fed a polarization allegedly too extreme to tolerate constructive dialogue toward consensus.

No wonder Frankentrump cannot even tolerate debate with his fellow Republican contenders for the nomination.

Since 2008, it seems that the top Republican leadership has realized that it must curry favor with voters other than white evangelicals, white workers and the moneyed elite. But it is too late for Trump’s enthusiasts to get the memo. Whenever thinkers concoct slogans, they produce culture. And the culture Republican strategists produced is decidedly illiberal.

To echo the words of Malcolm X in 1963, the Trump candidacy is as clear a case of chickens coming home to roost as ever history did see.

Amy Kittelstrom's new book is "THE RELIGION OF DEMOCRACY: Seven Liberals and the American Moral Tradition." She is a scholar of modern thought and culture who lives and works in the North Bay Area of California. She currently serves on the editorial board of the Journal of American History and is an associate professor at Sonoma State University. Her research has been supported by fellowships from the Center for Religion and American Life at Yale, the Charles Warren Center for the Study of American History at Harvard, and the Center for the Study of Religion at Princeton. Her next book will put the twentieth-century writer James Baldwin in deep historical context.