Ignore the smears: Bernie Sanders is right about Israel's heinous atrocities in Gaza — he just got the numbers wrong

Israeli soldiers admitted they shot Palestinians out of boredom, but Bernie is slammed for trying to tell the truth 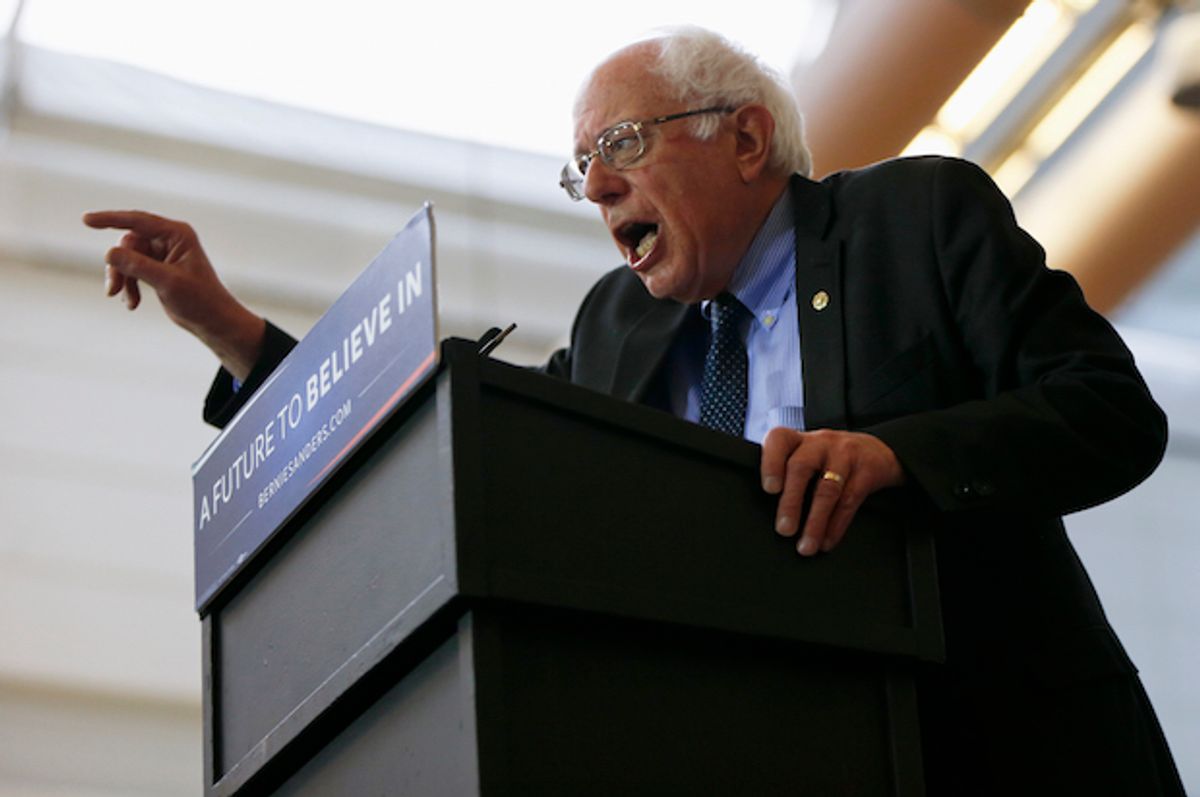 Presidential candidate Bernie Sanders has faced a torrent of criticism in recent days after criticizing Israel's atrocities in its 2014 war in Gaza.

In an interview published this week with the editorial board of The New York Daily News, Sanders fielded numerous questions about Israel-Palestine and U.S. policy in the Middle East.

The harsh questioning and the media's subsequent antagonistic response to Sanders' measured and levelheaded remarks is just the latest example of how thorough and extreme the bias is against Bernie and his insurgent grassroots campaign — and against anyone who dares to acknowledge Israel's oppression of the Palestinians.

Sanders, who has broken with Democratic Party dogma and promised to pursue a "level playing field" on Israel-Palestine, lived up to his promise in the interview.

Unlike his competitor Hillary Clinton, who has effusively lionized Israel and pledged to meet with hard-line right-wing Prime Minister Benjamin Netanyahu in her first month in office, Sanders acknowledged the suffering Palestinians endure under illegal Israeli occupation, and dared to mention what almost no American politicians ever do — namely, that Israel has engaged in crimes of its own.

"We cannot ignore the reality that you have large numbers of Palestinians who are suffering now, poverty rate off the charts, unemployment off the charts, Gaza remaining a destroyed area," Sanders said in the interview.

Israel "cannot just simply expand when it wants to expand with new settlements," Sanders stressed. "So I think the United States has got to help work with the Palestinian people as well. I think that is the path toward peace."

The Daily News was combative and disingenuous in its questioning. The editorial board implied that Israel's illegal settlements in occupied Palestinian territory may not actually be illegal and referred to them as "so-called settlements."

In reality, the U.N. and the entire international community, including the U.S., have insisted that Israel's military occupation of the Palestinian territories is illegal since it began in 1967.

When The Daily News pressed further, and asked about Israel's summer 2014 war in Gaza, Bernie stood his ground. He engaged in the obligatory criticism of Palestinian militant groups, but added a fact that, in the rest of the world, is completely uncontroversial.

"Most international observers would say that the attacks against Gaza were indiscriminate and that a lot of innocent people were killed who should not have been killed," Sanders said.

He explained further: "Look, we are living, for better or worse, in a world of high technology, whether it's drones out there that could, you know, take your nose off, and Israel has that technology. And I think there is a general belief that, with that technology, they could have been more discriminate in terms of taking out weapons that were threatening them."

Sanders was absolutely correct. Israeli veterans who fought in the war admitted as much, telling an Israeli NGO that they indiscriminately attacked Palestinian civilians, shooting Gazans out of boredom.

As the Washington Post reported, Israeli "soldiers described reducing Gaza neighborhoods to sand, firing artillery at random houses to avenge fallen comrades, shooting at innocent civilians because they were bored."

Members of the Israel Defense Forces, or IDF, recall that they were ordered to shoot "anyone you spot that you can be positive is not the IDF" — to attack "any person you see," and to "shoot to kill."

Here Sanders was absolutely right. When it came to the specifics, however, Sanders stumbled a bit.

When trying to recall the number of Palestinian civilians who were killed by Israel in the 51-day war, Sanders said, "Anybody help me out here, because I don't remember the figures, but my recollection is over 10,000 innocent people were killed in Gaza. Does that sound right?"

The Daily News did not even know the answer. "I think it's probably high, but we can look at that," the editorial board said.

"I think it's over 10,000," Sanders continued. "My understanding is that a whole lot of apartment houses were leveled. Hospitals, I think, were bombed."

He added, "So yeah, I do believe and I don't think I'm alone in believing that Israel's force was more indiscriminate than it should have been."

The media and political establishments exploded in response to this brief moment in the almost 10,000-word interview.

Sanders did misspeak. Israel actually killed more than 2,250 Palestinians in the 51-day summer 2014 war, known as Operation Protective Edge. According to the U.N., two-thirds of those killed were civilians — almost 1,500 people, including more than 550 children.

Another more than 11,200 Palestinians were injured in the conflict, including more than 3,400 children, the U.N. calculated. Roughly one-third of these children were permanently disabled.

While Sanders misstated the number of Palestinians killed, however, this mistake is not as surprising as it may seem, for the United Nations frequently uses the term "casualties" in its reports to refer to both injuries and deaths in conflicts, not just deaths.

There were approximately 13,500 Palestinian casualties in the war then, according to the U.N. definition.

This did not stop journalists and politicians from relentlessly barraging Sanders for the misstep, nonetheless.

Israel's former ambassador to the U.S. was most extreme in his response. Michael Oren, now a member of Israel's parliament the Knesset, accused Sanders of "blood libel" for the exaggerated figure.

It bears stressing that Sanders is the only Jewish presidential candidate from a major party, and, were he to be elected, would be the first Jewish president in U.S. history. Yet a prominent Israeli politician slung an ancient anti-Semitic accusation at the most popular Jewish American politician for mistakenly overstating the number of people his government killed.

"First of all, he should get his facts right. Secondly, he owes Israel an apology," Oren insisted of Sanders.

Oren implied that it is false that Israel bombed hospitals. In reality, this is an objective fact.

At least 17 hospitals, 56 primary healthcare facilities and 45 ambulances were damaged or destroyed in the war, and 16 healthcare workers were killed, with an additional 83 injured. The total cost of the conflict to Gaza’s healthcare system was estimated at $50 million.

The U.S. media was overwhelmingly biased in favor of Israel. One of the most egregious moments was when NBC suspiciously removed award-winning journalist Ayman Mohyeldin from Gaza after he reported on Israel's killing of four Palestinian children on a beach. And yet even it could not ignore the Israeli military's attacks on hospitals.

NBC itself reported on July 21, 2014, "Israeli forces fired a tank shell at a hospital in Gaza on Monday, killing at least four people and injuring 40 others."

"It was the third hospital Israel's military has struck since launching a ground offensive in Gaza last week," NBC noted.

Oren's statement is also particularly ironic considering that, during the war, then-Israeli Ambassador to the U.S. Ron Dermer insisted Israel had "the right" to bomb Gazan hospitals if Hamas militants were launching rockets from them — an accusation Israel frequently lobbied at Palestinians without much evidence.

Civilian neighborhoods were also relentlessly targeted. More than 12,600 housing units in Gaza were totally destroyed in the Israeli shelling. Another almost 150,000 housing units were damaged, with nearly 6,500 severely damaged. This left roughly 500,000 Palestinians displaced, and made 100,000 Gazans homeless.

Even the U.S. government, which wholeheartedly backed the Israeli military — to which it gives more than $3.1 billion tax dollars of annual aid — eventually had to say it was “appalled” by Israel's “disgraceful” bombing of U.N. schools sheltering thousands of displaced Palestinians.

During the war, the U.S. media and government fearmongered endlessly of Hamas and its rockets, but, as MIT researcher and former U.S. government official Subrata Ghoshroy indicated in the Bulletin of the Atomic Scientists, only 3 percent of Hamas rockets actually reached populated areas, and even then they caused little damage.

That is to say, over 24,400 percent more Palestinian civilians were killed in the war, using U.N. figures.

Sanders may have gotten the precise figure wrong, but the sentiment of his comments was absolutely true, even if they were not entirely accurate.

In its report "Black Friday," Amnesty International documented how Israel carried out war crimes and “possible crimes against humanity” in its attack on Rafah, Gaza, taking revenge out on Palestinian civilians after an Israeli soldier was captured.

In four days of intense bombardment, which Amnesty described as "carnage," Israel killed at least 135 civilians, and perhaps over 200, including at least 75 children. That is to say, 56 percent of victims in the attack were children.

This was just four days of the 51-day war, and this is only one report from the dozens that were authored by numerous human rights organizations.

No American media outlets reported any of these facts in response to Sanders' comments, leaving them largely contextless. Instead, the press, which has long been incredibly dismissive of Sanders' enormously popular campaign (when it is not ignoring him, that is), went for the jugular, ruthlessly attacking him.

Rubin went so far as to claim that Sanders' "accusing Israel of war crimes" is anti-Semitic. Apparently the world's leading human rights organizations are also anti-Semitic for documenting Israel's atrocities.

A slew of other publications slung cheap shots at Sanders. Even The New York Daily News gave a platform to an Israeli politician to attack Sanders for comments he made in an interview with the very same publication.

Nor did the media mention the fact that 15 journalists were killed in Israel's war in Gaza, some of them "purposely targeted," according to a report by the Press Emblem Campaign, a non-governmental organization that had special consultative status with the U.N. Another 16 Palestinian journalists lost their homes in Israeli bombing and shelling, again "often purposely targeted."

Instead, many media outlets took Sanders' comment out of context. Sanders himself said in the interview "I don't remember the figures" and emphasized that he could be wrong. Yet journalists weaponized Sanders' mistake and used it to attack his campaign.

American critics of Israeli government policy are accustomed to being smeared for speaking out about human rights violations. Even Jewish critics are frequently accused of anti-Semitism. The fact that the most popular Jewish American politician is being accused of anti-Semitism for citing what he readily admitted could be a mistaken figure concerning Israeli atrocities shows just how extreme this political suppression is.

Sanders has already fielded such outlandish criticism. He was, for instance, the only presidential candidate to turn down an invitation to speak at the 2016 policy conference of AIPAC, the most influential pro-Israel lobby group; whereas, in her speech, Hillary Clinton sounded almost indistinguishable from hard-line right-wing Prime Minister Benjamin Netanyahu, distorting Israel's actions and failing to even once acknowledge the Israeli military's almost 50-year-long illegal occupation of the Palestinian territories.

The facts, nevertheless, show very clearly that Israel's war in Gaza was nothing short of catastrophic. The U.N. itself used this word to describe it. But Sanders committed a grievous misdeed in U.S. politics for acknowledging this fact.

Any even cursory review of reports by the U.N. and human rights organizations will show unequivocally that Sanders' comments were in fact very moderate.

Sanders may have overstated the number of Palestinian civilians killed, but he drastically understated just how heinous Israel's atrocities were in Gaza.