Trump's fueled by white resentment, racism and nativism. Why does the media mistake that for working-class anxiety? 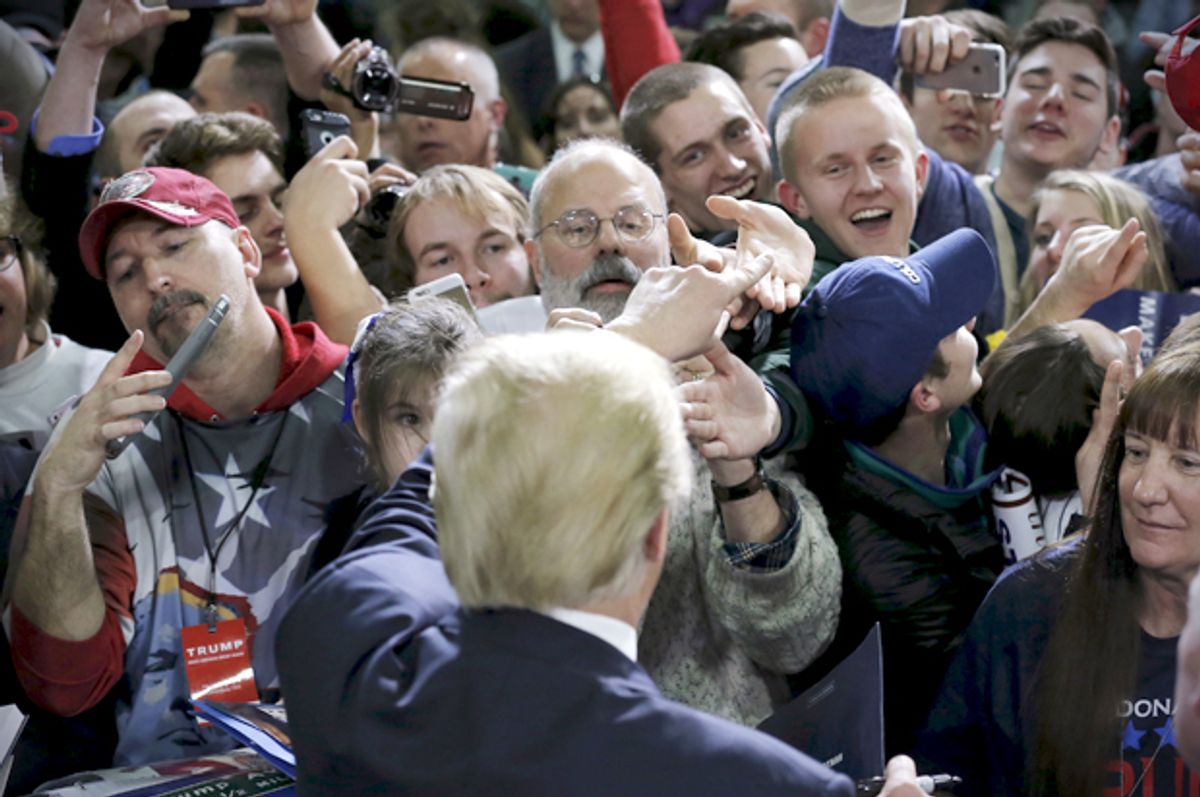 The Washington Post's Dana Milbank took on white racism and support for Donald Trump in a recent column. In “Trump’s Bigoted Supporters” he writes:

Trump had the support of 34 percent of Republican-leaning voters overall, but among those who said that whites are losing out, 43 percent supported Trump.

In the weeks and months to come, there most certainly will be additional polling data and other research which confirms the great role that racism has played in Trumpmania.

Of course, this information is important. However, it should not be surprising. The influence of racial animus on public opinion and other political behavior is one of the most-repeated findings in all of the social sciences.

Unfortunately, just as The Atlantic’s Conor Friedersdorf did in his recent piece “How Emory's Student Activists Are Fueling Trumpism,” Dana Milbank makes the choice to offer the following qualifier:

That ugly moment comes to mind in describing how many of Trump’s supporters have bigoted motivations: Not all — but a lot of ‘em.

Just as it’s unfair to paint all Trump backers as prejudiced, it’s impossible to ignore a growing volume of public-opinion data showing that a large number of his supporters are indeed driven by racial or xenophobic animus.

As I explored in an earlier essay here at Salon, Milbank’s caveat is part of a larger pattern among the American commentariat where too many of its members are afraid to publicly (and correctly) label Donald Trump and his supporters as racists.

Why this anxiety? Why are so many members of the chattering class dancing around the clear and obvious truth that Donald Trump’s political movement is largely driven by white racial resentment, overt racism, bigotry and nativism?

Part of this answer lies in how telling the truth about white racism in the post-civil rights era is considered worse than the harm it does to people of color. Moreover, to suggest that a given white person is a racist — or alternatively, that white people as a group either benefit from institutional racism or are active racists — is an indictment of both their personal character and the various myths (meritocracy; American Exceptionalism; individualism; equality, etc.) that the country’s political culture rests upon. Together, these answers form a type of electrified third rail in American political discourse that few members of the chattering classes are willing to stand on. This is a profound failure of moral leadership.

The unwillingness by Milbank, Friedersdorf and others to plainly and directly state that Donald Trump and his supporters are part of a racist political movement is an example of what sociologist Robin DiAngelo has described as “white racial fragility” on a massive scale:

This systemic and institutional control allows those of us who are white in North America to live in a social environment that protects and insulates us from race-based stress. We have organized society to reproduce and reinforce our racial interests and perspectives. Further, we are centered in all matters deemed normal, universal, benign, neutral and good. Thus, we move through a wholly racialized world with an unracialized identity (e.g. white people can represent all of humanity, people of color can only represent their racial selves). Challenges to this identity become highly stressful and even intolerable…Not often encountering these challenges, we withdraw, defend, cry, argue, minimize, ignore, and in other ways push back to regain our racial position and equilibrium. I term that push back white fragility.

White fragility manifests itself in conversations about race and racism when white folks often use a rhetorical strategy of making themselves the center of the dialogue as opposed to listening to and accepting the experiences of people of color as valid.

White fragility also makes itself known in moments of extreme anger, sadness, tears or complaints about “hurt feelings,” as opposed to practicing critical self-reflection about one’s own behavior, and plays a broader role in maintaining systems of white privilege as well as personally benefitting from them.

On a societal level, white racial fragility takes what should be a basic fact given American’s history and present (white racism is real; the United States is founded on and continues to be orientated around protecting inter-group white advantage and privilege) and makes it into something subjective, a mere opinion, that subsequently can be accepted or rejected based on one’s own personal whims and convenience.

The practical effect of this dynamic is that the bar of evidence is raised so high for what constitutes racism that often anything short of the public lynching of a black or brown person by white supremacists is subjected to the qualifier that “We ought not to jump to the conclusion that racism was involved.” This mobilization of white racial fragility silences truth-tellers, punishes people of color who are victims of racism, and ensures that the “problem of the color line” will continue well past the 20th century and into the 21st.

If a Nazi was running for public office, the chattering classes would not allow his or her voters to defend their choice by saying “I am not a Nazi or a ‘bad person,’ I like this candidate because they will give us full employment and better roads.”

Likewise, if an avowed member of the Ku Klux Klan was seeking public office, his supporters would not be allowed the out of saying that “we aren’t racists but like the fact that the KKK offered charity to the white poor.”

In both examples, the supporters of those candidates would be publicly shamed by the American news media.

Many members of the American commentariat remain in denial about the power of Donald Trump and his racist allure for the most backward and bigoted parts of the American electorate. Now, Trump is months away from becoming the likely Republican presidential nominee.