Unlike other premium channels, Starz shows are aiming their sex scenes at a radically underserved TV audience—women 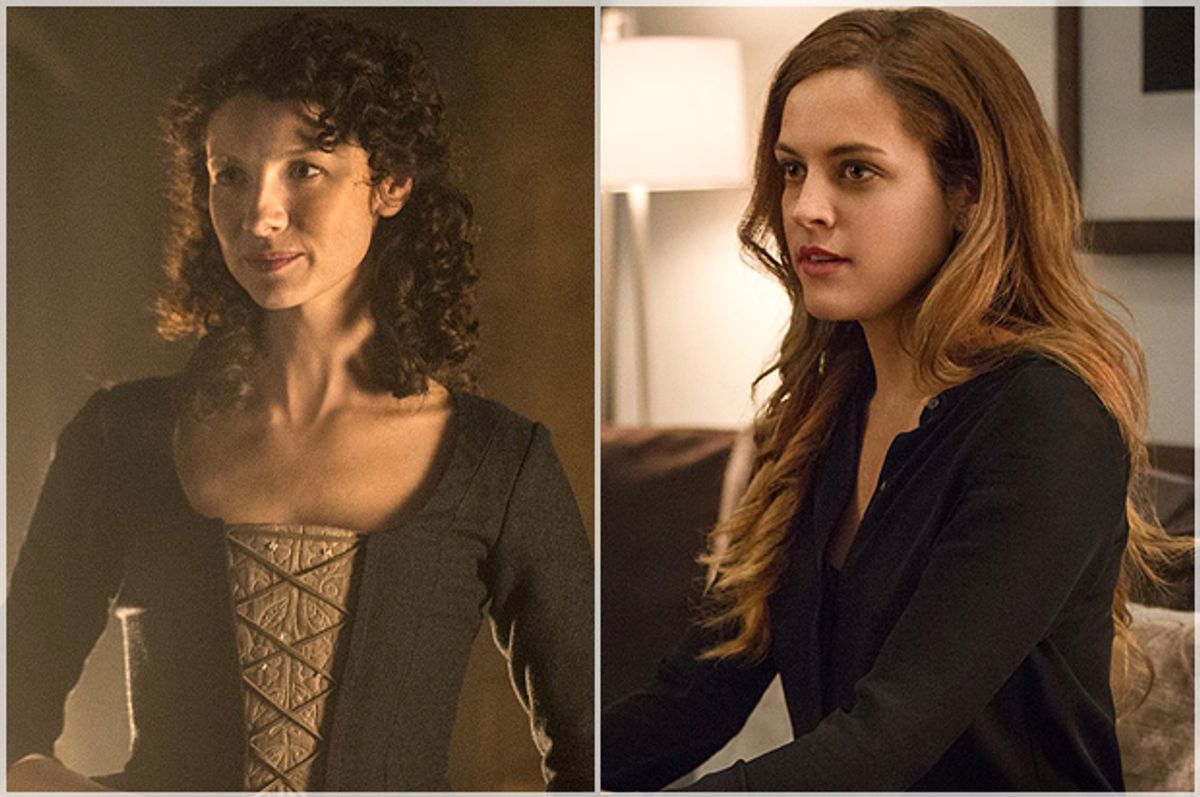 You’d be forgiven for thinking Starz is where the soft-core pornography lives. Cinemax is really where it lives, but as with all premium cable television, the selective subscription model comes with the promise of nudity and sex. Starz is often bundled in an even more exclusive tier than HBO and Showtime. Until quite recently, the network focused on theatrical releases to draw viewers, and even now only offers a handful of carefully pruned originals, compared to, for example, Netflix’s dozens of new shows or Showtime’s long-running slate.

But on the best Starz shows, there is something different about the nudity, something special about the sex. In 2014, Mo Ryan wrote the definitive piece on how “Outlander's” sex scenes appeared to be doing something revolutionary: “A feast for scavengers,” she called it.

Eventually, they had sex for the first time, and the whole act was amusingly devoid of cliché: no “sexy” camera angles, no golden light, no instant nirvana. Jamie wondered if they should do it like the horses in the fields; later, Claire stopped things at one point to tell him he was accidentally crushing her. It didn’t last long. It was awkward first-date sex, and it was achingly, amusingly real.

And that was as refreshing as anything else.

The term “female gaze” is a bit slippery and academic; we don’t really know what it is, we just know what it is not. But at the very least, this is a sex scene of a very feminine fantasy and it’s very feminine wish fulfillment. It is not that far off from the heroine falling in love with and marrying the handsome prince. “Outlander's” wedding episode caters, lovingly, to at least one kind of female desire, and the result is a sex scene quite unlike any other on television. As the show has gone on, it has doubled down on reflecting the feminine perspective in a patriarchal world, ranging from sexual assault to, in this second season, bikini waxing. To quote the incomparable Jenny Slate: “'Outlander’ is insane bc its like ‘do u luv 2 b horny, everyone?’ But then its like ‘HERES A SCENE WHERE THEY WASH WOOL W HOT PISS. ITS FINE.’”

A lot of entertainment is wish fulfillment; a lot of prestige television, in turn, has been about deconstructing those fantasies. With “Outlander” and now “The Girlfriend Experience,” Starz is exploring a few very different female fantasies in a few very different ways—with the intent, I’m guessing, of reaching a female audience that is underserved by other prestige cable networks. Ryan jokes in her piece about the “boob quota” that even Starz’s other shows appear to need to meet, and certainly, both “Outlander” and “The Girlfriend Experience” have an awful lot of boobs. But they are not, always, there for men to be looking at them, or they are at least not just for that. Some other purpose is at play.

“Outlander," whose second season started Saturday, began as one very special kind of fantasy—where a happily married woman falls through time and has no choice but to marry and then bang a hot young hunk who is desperately in love with her. In season two, following author Diana Gabaldon’s cheeky sense of humor in the source material, Claire and Jamie leave misty Scotland behind for an even more romantic locale: Versailles under Louis XV, and his jewel, Paris, the greatest European city of the era. Kilts and sporrans are exchanged for silks and carriages; “Outlander's” already gorgeous costuming and set design is practically reveling in the sumptuous trappings of Bourbon France. Claire and Jamie, of course, come upon a reliable source of wealth that keeps them in gowns and coaches, while plotting to change the course of history (literally, that is what is happening).

“Outlander's” first season, in the highlands of Scotland, was rather gritty; in France, any pretense of being more than luxurious wish-fulfillment has been abandoned. Claire and Jamie take to French intrigue with surprising dexterity, with some retconned character traits and a whole lot of new characters. It’s increasingly feeling a bit like everyone they’ve ever met is related to everyone else they’ve ever met, too—Claire runs into her mother-in-law, several generations removed, in a parlor. But the fantasy is delicious—beautifully rendered and infinitely appealing. And along the way, a side of history that doesn’t often make the spotlight comes with it—the history of wives and mothers, of girlfriends and mistresses. One French dame experiences the aforementioned waxing, while her niece and friends look on; later in the season, a woman tries to end her own pregnancy with what is available to her, and finds her options lacking.

Chilly, sleek, and meditative, “The Girlfriend Experience”—“suggested by,” the credits read, Steven Soderbergh’s 2008 film—could not be more different. Where “Outlander” is almost baroque in its production and appeal, “The Girlfriend Experience” is a spare, indie affair of a modern, almost featureless Chicago—essentially trading one much-romanticized setting for another. Christine Reade (Keough) is a second-year law student drawn to the money and excitement of expensive sex work, but even before she starts working, she’s drawn to being watched. “I want you to watch me,” she tells a partner in the first episode, before fondling her own breasts and getting herself off.

The tension of watching and being watched is central to the show; Christine consciously models herself into a figure that men will look at—and pay thousands of dollars a night to spend time with. At the same time, she watches them, with interest, revulsion, or detached amusement. She also watches herself. In one semiotically charged scene early in the season, she scrolls through the photo gallery from the erotic shoot she just did, looking for the right images for her website. She’s become the object of fantasy; she swipes through the images without seeming to even recognize that the girl on the screen is her. The show’s most climactic moments, throughout the 13-episode season, are when Christine is regarding herself; her own body, through the lens of other people’s desires and stigmas.

Christine is both the object of fantasy and living out her own fantasy; it’s possible to read her story as both empowering and objectifying, with Christine as both subject and object. The title is a snarky little dig at the fantasies of these wealthy, powerful men; Christine is technically doing what they want, but she’s also walking away with stacks of cash. The figure of the nameless escort or anonymous whore is frustratingly central to prestige drama—witness the dead bodies in “True Detective” or the hanger-on goomahs in “The Sopranos.” In “The Girlfriend Experience,” the tables are turned; it’s the clients whose pale, flabby, middle-aged bodies blend together, while Christine’s eyes are always looking, searching, examining. Keough is Elvis Presley’s granddaughter, and it is particularly noticeable in the shape and set of her brow—thrust slightly forward, alertly.

“The Girlfriend Experience” isn’t perfect. Christine's motivations are sometimes opaque, and sometimes not; the plot is sometimes thrilling, and sometimes not. Where "Outlander" circumvents the narrative hurdles of fantasy by giving more and more character traits to its leads, "The Girlfriend Experience" circumvents the problems of deconstruction by making Christine more and more opaque, so that her motivations do not even seem obvious to herself, let alone the viewer.

Her own exquisitely rendered interest in power dynamics mirrors, to some degree, the network’s. Starz is not so subtly going after marginalized audiences, whether that is female audiences, African-American audiences (a hugely underreported phenomenon), or that much-coveted pirate demographic. (Okay, just kidding on that last one, though “Black Sails,” starring John Malkovich, does have its own loyal fanbase.) Vulture’s Joe Adalian wrote last year:

[Starz CEO Chris] Albrecht decided to shift Starz’s series development to focus on projects that would speak not only to specific segments of the audience but viewer groups that, despite having plenty of options on broadcast and basic cable, hadn’t always been targeted by premium cable networks. “I looked around and … it seemed as if there were audiences that were being underserved — that were still paying money but that were probably not getting the value that they would hope to get off of a premium subscription,” he says. “And we said, ‘Let’s target those audiences, and let’s back shows that we think can drive a real fervent fan base that then becomes the kind of advocacy group for the shows themselves.'”

It’s paying off. I’m not qualified to speak for either pirates or African-Americans, but certainly, as a woman, Starz’s programming both meets the apparently necessary components for a prestige show—sex, violence, expensive sets, pedigreed talent—while also delivering fantasy and deconstruction that can appeal to women viewers. (Some women viewers, anyway. This isn't a triumph for queer experiences, or for non-rich, non-white female experiences.) But it does seem significant, particularly with sexy shows like “Outlander” and “The Girlfriend Experience,” that Starz showcases its eroticism in a way that feels empathic and empowered, not exploitative. With female talent behind the camera—co-executive producer Anne Kenney and director Anna Foerster were behind that “Outlander” wedding sex scene, which of course was adapted from Diana Gabaldon’s books; Amy Seimetz writes, directs, and stars in “The Girlfriend Experience”—and the aforementioned feminine sensibilities in front, Starz’s prestige-y porn takes on a different, more democratic tone. A world where boobs are not just for all, but by all, too.