Technology f*cked us all: The anxiety driving Donald Trump and Bernie Sanders is really about machines taking our jobs

Trump/Sanders have tapped a working-class anxiety our elites don't understand. But they've misdiagnosed the problem 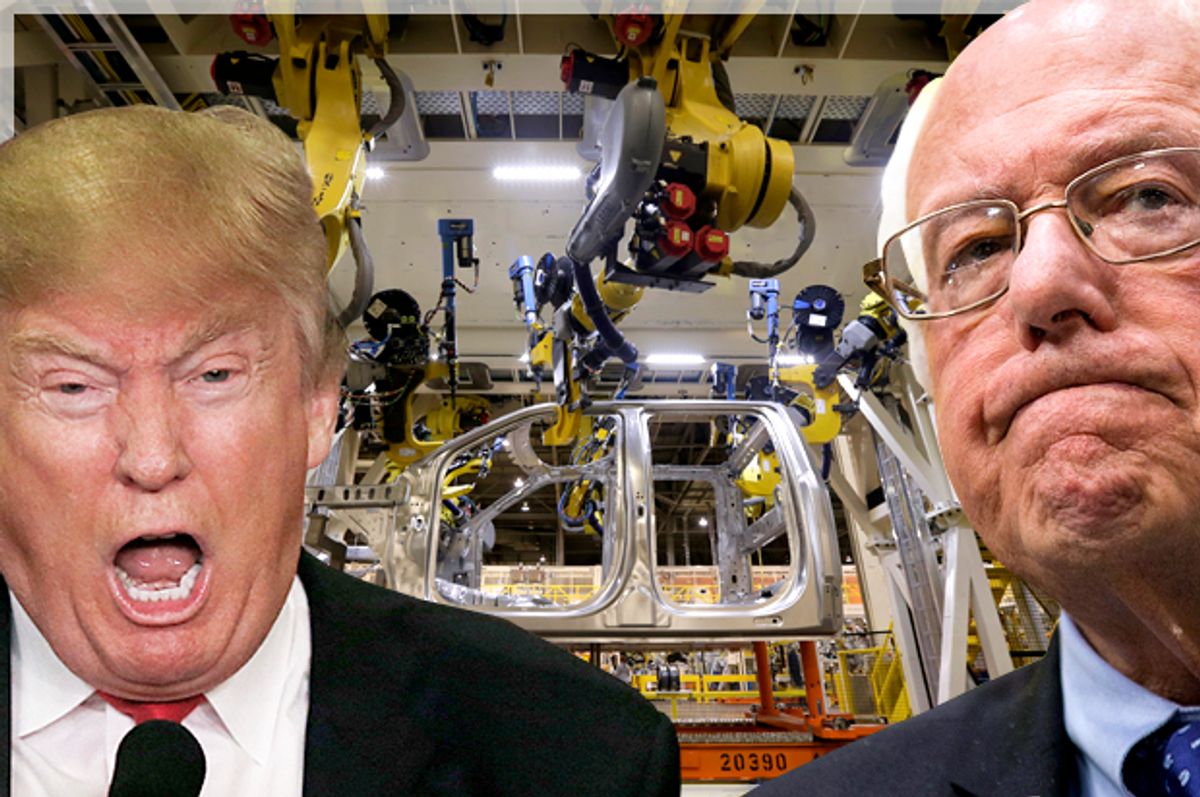 Peel away the billionaire braggadocio, set aside the insults and bile, and Donald Trump is running for president on a promise to build a protective wall around America’s white working class. Most famously he is promising to build a physical wall on the Mexican border – which he will somehow persuade the Mexicans to pay for – to protect American workers from immigrants bent on stealing their jobs. But he is also promising to build trade walls by renegotiating free trade agreements so workers in China and elsewhere can’t undercut American workers. And he is promising to wall us off from the world diplomatically so American blood and treasure will no longer be spent defending our allies in Asia and Europe.

This is the core message Trump hopes to ride to the Oval Office: If we build a big, beautiful wall around Fortress America, we can sustain ourselves without the help of the rest of the world.

Let us ignore for a moment all the practical reasons why this make no sense. Forget that, whoever ends up paying for it, no wall can keep out desperate, hungry people who already tunnel miles underground and cross searing deserts for a better life in America. Forget, too, that with more than 11 million illegal aliens living in this country, some of them for decades, we are never going to be able to send them all home. And forget that free trade deals, while they do send many jobs overseas, also benefit Americans by reducing the cost of goods we all buy.

Forget all that. Trump is wrong because, while he, along with Democratic firebrand Bernie Sanders, have tapped into the deep pain being felt by America’s working class, they are misdiagnosing its root cause. Companies have always cut costs by shopping around for the cheapest workers. Bankers and corporate executives have always taken their profits first and absorbed their losses only after everyone else has suffered. Politicians have always sided, often corruptly, with whoever holds the most money and power.

What is different today, and what is ailing America’s working and lower-middle classes, is the way machines have fundamentally reshaped the work undereducated workers do. Advances in technology are gradually draining the skill and human judgement from every kind of working-class labor, from weaving a bolt of cloth to frying a hamburger, giving companies free rein to transfer once reasonably well-paid skilled and semi-skilled American jobs to unskilled foreign workers, both here and abroad. At the same time, advances in communications and transportation have enabled companies to build truly global supply chains, opening the way for them to shop the world for the cheapest and least powerful workers to do the job.

Together these forces, the de-skilling of human labor and the shrinking of the world of commerce, are helping corporations grow ever larger and more powerful and shifting ever more earning power from the assembly line to the executive suite. The more money and power the elite amasses, the more they can game the system to amass more money and power, until you’re left with a situation like ours, where a typical CEO makes 330 times more than the average worker and the top 1 percent of Americans hold 40 percent of the country’s wealth.

The growing gap between rich and poor in America is morally appalling and politically unsustainable, but many of the forces driving the disparities are systemic and irreversible. No wall we can build will stop the seepage of jobs overseas in a fully globalized and technologically mobile world, and a shift to a democratic socialist model that worked for highly homogenous northern European countries in the middle part of the last century is unlikely to work in our own fractious, racially diverse country facing 21st century problems. Whether we like it or not, we are stuck with the world we have made, along with the deep problems it is causing us, and we have no choice but to innovate our way out of it.

The thing is, we did it once before. In the 1930s, when mechanization finally pushed America’s small farmers and sharecroppers out of the fields and into factories, we saw a profound shift in the role of government in people’s lives. When poor people could no longer feed themselves from their own plot of land, however meager, governments had to step in to find new ways to feed the hungry and care for the sick and elderly. The Soviet Union responded to this crisis with Communism. Central Europe responded with Nazism. America responded with the New Deal. Then, 10 years later, we had a war to see which system worked best.

America won that battle, and in the process set off the longest and most prosperous economic boom in our history. But now that boom has run its course, and we must reinvent ourselves once again, this time for a very different world.

As was the case in the 1930s, when the developed world at last felt the consequences of a century-long shift from an agrarian society to an industrial one, our present challenges have a long history. As early the 1950s and ’60s, global markets were pushing good union jobs overseas and technological advances were turning skilled jobs into less lucrative semi-skilled ones. But today, when robots build cars and the digital revolution is tossing entire job categories – office assistant, taxi driver, newspaper reporter – into the trash heap, the sheer rate of change is starting to have political ramifications.

So far, though, America’s political class, including the current crop of presidential contenders, hasn’t begun to grapple in a serious way with how machines are changing the nature of work, especially at the economic margins. In part, this is because American political elites are themselves creatures of the knowledge economy and don’t feel the pain of the shift from an industrial economy in the personal and direct ways so many of their less educated constituents do.

Then, too, there is the problem of mounting a coherent campaign against technological progress. People love their gadgets, which bring them things they want cheaply and instantaneously. Digital communication may be picking clean the lower rungs of clerical workers, from receptionists to mailroom employees to inventory clerks, but try coming up with a political slogan denouncing email.

More troublingly, forces like technology and globalization are faceless abstractions, and in the heat of a campaign, efforts to combat their ill effects often devolve into scapegoating and demagoguery, as this year’s presidential contest has shown us all too well. A crowd that might sit on its hands for a lecture on the changing nature of work in a globalized, digitally connected world will cheer lustily at crude denunciations of Mexican immigrants or crafty Chinese businessmen stealing American jobs. This fury, while it turns out voters, can also send us tilting at windmills, chasing solutions that are wildly impractical, morally objectionable, or just plain counterproductive.

Still, as a society, we must learn to rage against the machines, not in the destructive sense of the industrial-age saboteurs who threw their wooden shoes into their machines to break them, but thoughtfully and creatively. In every past burst of technological progress, the jobs that were rendered obsolete by the new machines were eventually replaced by new kinds of work made possible by the new machines. But that doesn’t simply happen by natural law. We have to make it happen, the way Franklin Roosevelt did when he started experimenting wildly with the levers of government to stop capitalism from devouring itself.

And we have to start making it happen now. The longer we allow machines to shape our work lives unchecked, the more we will see wealth concentrate in the hands of those who design and finance those machines. Already, technology and the globalizing effects technology makes possible have hollowed out American factories and sucked the economic life from a few select knowledge industries like journalism, and now even workers in solidly upper-middle-class professions like law and medicine are starting to see their work de-skilled and outsourced to other countries.

Man vs. machine: It’s the defining issue of our age.