How the U.S. confronts climate change will shape the world for generations; neither Clinton nor Trump seems to care 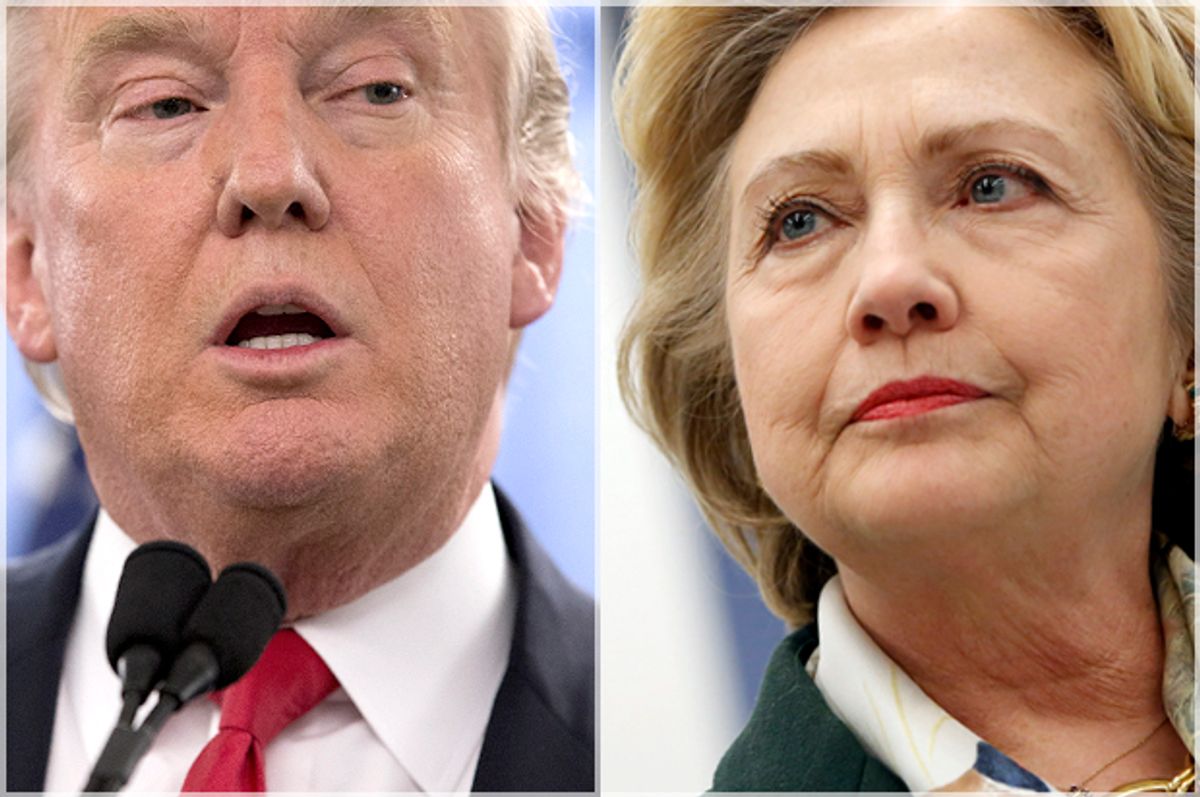 Before dropping out of the presidential race last month, Marco Rubio repeatedly declared that the 2016 presidential election is “the most important in a generation.” Such language is, of course, not uncommon to hear during election seasons. Politicians have been assuring the public for decades that the “next election” will be more significant than ever before, and that if the opposition party wins, the consequences will be catastrophic. As Rubio once stated in overtly apocalyptic language, “if we don’t get this election right, there may be no turning back for America.”

As it happens, I think Rubio is right. But not for the reasons that he cites: we’re not a “great nation in decline” because Obama has “deliberately weakened America.” Rather, the next U.S. election matters because a subset of the problems we’re facing today are genuinely global in scope and transgenerational in their consequences. (A few could even be categorized as “existential risks” that threaten humanity with total annihilation.) For example, the threat of nuclear terrorism is, if anything, rising, according to experts like Joe Cirincione. Most people aren’t aware of just how great this threat is. As the Harvard scholar Graham Allison wrote back in 2004, a nuclear bomb destroying a major U.S. city before 2014 is “more likely than not.” Similarly, the dean of Georgetown University’s School of Foreign Service, Robert Gallucci, noted in 2005 that “it is more likely than not that al-Qaeda or one of its affiliates will detonate a nuclear weapon in a US city within the next five to ten years.”

These are not anomalous probability estimates. They represent the opinions of many of the most knowledgeable experts about the issue of nuclear terrorism. Indeed, a survey of 85 national security experts in 2005 found that “60 percent of the respondents assessed the odds of a nuclear attack within 10 years at between 10 and 50 percent, with an average of 29.2 percent.” Nearly 80 percent of those polled said the attack would come from a terrorist organization. Fortunately, an act of nuclear terrorism has not yet occurred. But, as was the case during the Cold War, we may have luck more than anything else to thank for this outcome.

Today, though, the situation may be even worse than it was in the shadow of 9/11. Not only do we have al-Qaeda and its affiliates, such as Jabhat al-Nusra in Syria, to worry about, but the U.S.-led preemptive invasion of Iraq has fueled the rise of the largest and best-funded terrorist organization in human history: the Islamic State. While this group was initially focused on building a robust caliphate in Syria and Iraq, it has recently turned its attention to plotting attacks in other countries, including the U.S. In fact, an issue of the Islamic State’s online propaganda magazine, Dabiq, openly fantasizes about acquiring a nuclear weapon from Pakistan, which has a history of nuclear malfeasance, and smuggling it into the U.S. via the “porous borders” of Central America. Given their sizable resources and apocalyptic ideology, according to which an Armageddon-like battle in northern Syria is just around the corner, the Islamic State was a primary focus of the recent nuclear summit held in Washington, D.C., involving leaders from around the globe.

The point is that, as Obama correctly noted years earlier, if even a single nuclear bomb were to be detonated somewhere in the world, the consequences “would badly destabilize our security, our economies, and our very way of life.” Nuclear terrorism thus constitutes a grave and potentially growing threat, and this fact makes the 2016 election especially important.

But nuclear terrorism probably isn’t the most significant risk that the 45th president of the United States will have to confront. Rather, this title goes to the ongoing, slow-motion catastrophe of anthropogenic climate change — a phenomenon that threatens not just the future prosperity of the U.S., but the survival of the entire global village. The fact is that climate change will result in a range of catastrophic consequences, including extreme heat waves, the spread of infectious disease, megadroughts, coastal flooding, desertification, food supply disruptions, widespread biodiveristy loss (e.g., the sixth mass extinction), mass migrations, social unrest and political instability — to name just a few.

And multiple high-ranking U.S. officials have affirmed a causal connection between climate change and terrorism. For example, John Brennan, the current Director of the CIA, recently stated that “the impact of climate change” is one of the “deeper causes of this rising instability” in countries like Syria, Iraq, Ukraine, Yemen and Libya. Similarly, Chuck Hagel, the former secretary of defense, describes climate change as a “threat multiplier” that “has the potential to exacerbate many of the challenges we are dealing with today — from infectious disease to terrorism.” And the Department of Defense notes in a 2015 report that “Global climate change will aggravate problems such as poverty, social tensions, environmental degradation, ineffectual leadership and weak political institutions that threaten stability in a number of countries.”

Consider some recent data that underline the fact that climate change is a “clear and present danger.” As of this writing, the hottest month on record was last February. It completely “obliterated” the previous “all-time global temperature record” set by — take a guess — January 2016. And January 2016 beat the previous records set by October, November and December 2015. Similarly, the hottest 16 years on record have all occurred since 2000, with only a single exception (1998). The current record-holder is 2015, followed by 2014, 2010 and 2013, but it appears that 2016 could be even hotter than 2015.

This being said, climate change isn’t just a “present” danger with implications for human well-being this century. As a 2016 paper published in Nature points out, the fossil fuels that we’re burning right now could affect future generations for up to 10,000 years. We are, in other words, “imposing adverse changes on more humans than have ever existed.” To quote the study, co-authored by more than 20 scientists from around the world, at length: “The next few decades offer a brief window of opportunity to minimize large-scale and potentially catastrophic climate change that will extend longer than the entire history of human civilization thus far. Policy decisions made during this window are likely to result in changes to Earth’s climate system measured in millennia rather than human lifespans, with associated socioeconomic and ecological impacts that will exacerbate the risks and damages to society and ecosystems that are projected for the twenty-first century and propagate into the future for many thousands of years.”

If studies like this are to be believed — and they ought to be, given that they’re published in peer-reviewed journals and based on objective, checkable evidence — then it follows quite directly that the 2016 presidential election really could be the most important in a generation. Indeed, one could plausibly argue that this election will be the most important political event in the entire history of human civilization, given the U.S.’s standing as the leading superpower and the second biggest polluter in the world (by a long shot). How the U.S. handles the global, transgenerational problem of climate change will not only have a significant impact on what the world looks like by 2100, but it will shape the world for hundreds of human generations. It is, therefore, absolutely crucial that the next POTUS recognizes the multi-millennial scope of climate change and responds to this “severe” and “pervasive” threat with true wisdom and foresight.

Unfortunately, neither Hillary Clinton nor Donald Trump — the two leading presidential candidates right now — inspire much confidence that climate change will be a priority for their administrations. As the activist Naomi Klein recently bemoaned, while Clinton was secretary of state, “she had a huge megaphone to make [climate change] an issue, to show that she understands the connections between human security and climate, [yet] she didn’t use the megaphone.” Because of this, Klein opines that Bernie Sanders would be “a significantly better candidate.” Indeed, not only has Sanders made climate change a central theme of his campaign, but he twice characterized it as the biggest national security threat facing the country, a claim that comports with the above-mentioned statements by Brennan, Hagel and the Department of Defense.

While a Clinton presidency could likely have undesirable consequences for the environment, a Trump presidency would almost certainly be catastrophic. As the Bulletin of Atomic Scientists notes in their 2016 Doomsday Clock announcement, the Republican Party “stands alone in the world in failing to acknowledge even that human-cased climate change is a problem.” Indeed, Trump tweeted in 2014 that, “This very expensive GLOBAL WARMING bullshit has got to stop. Our planet is freezing, record low temps, and our GW scientists are stuck in ice.” Two years earlier, he even more bizarrely claimed that “The concept of global warming was created by and for the Chinese in order to make US manufacturing non-competitive.” More recently, on "Fox & Friends," he asserted that his tweet was a “joke,” yet he immediately added that climate change “is done for the benefit of China, because China does not do anything to help climate change.”

Consistent with such anti-science, climate denialist, conspiracy-theory-laden, anti-intellectual rhetoric, Trump has also vowed that, if president, he’ll eliminate the Environmental Protection Agency (EPA), which he has erroneously called “the Department of Environmental Protection.” As Trump explains, the EPA is “going around causing damage as opposed to saving damage,” and the result is “a tremendous amounts [sic] of money, tremendous fraud, tremendous abuse.” If the EPA were abolished, though, it would lead to “an unravelling of basic protections of air and water,” not to mention a worsening of climate change, which, as we’ve seen, is a threat whose effects will linger for millennia.

Given the best current scientific evidence, it’s not hyperbole to say that the stakes are higher today than ever before. Humanity is confronting a growing number of problems — scholars call them global catastrophic risks — that are qualitatively different from anything our species has ever encountered. These problems require exceptional wisdom and careful attention to the facts (as best we know them) to solve, yet the leading presidential candidates of the world’s superpower don’t appear to be aware of just how globally catastrophic climate change could be. This is a bad situation in which to find ourselves. It’s also a bad situation for potentially billions upon billions of future humans who could come to inhabit our planetary spaceship many thousands of years from now. Let’s hope future generations look back on this unique moment in human history with sighs of relief, rather than groans of resentment.