Dear straight Springsteen fans: If you're shocked that Bruce canceled his North Carolina show, you haven't been paying attention 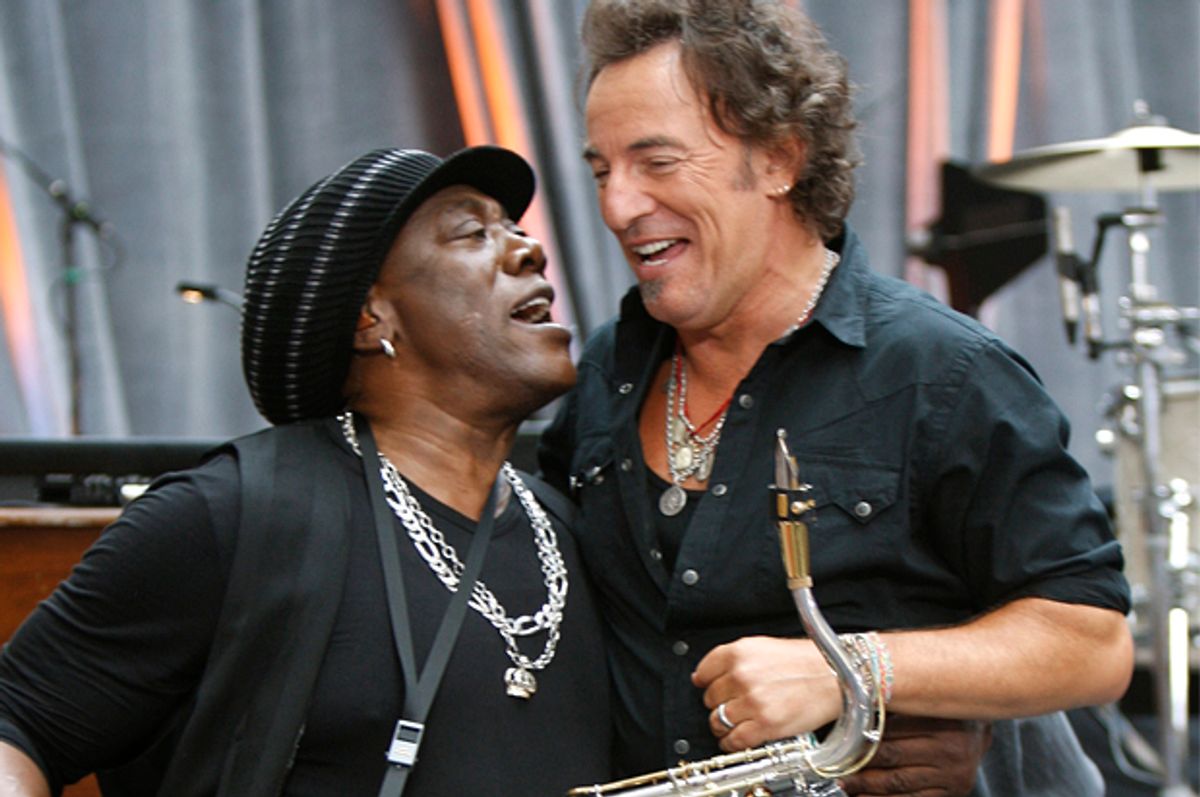 It does not require the imagination of a fine novelist to realize that Bruce Springsteen made many of his most fervent fans uncomfortable in the 1980s.

A young or middle aged man, ripped right out of the lyric notebook of songs like “Darkness On the Edge of Town” and “Darlington County,” just got off his shift at the mill or dock, washed down his fatigue with domestic beer, and settled into his seat for a three hour performance from his favorite musician. Then, right in the middle of Springsteen’s nut and bolts, blue collar rock ‘n’ roll show, he leads the audience to a climactic moment of ecstasy. He slides across the stage, nearly tearing apart his tight jeans, straight into the arms of Clarence Clemons – his gigantic saxophone player whose horn had a sound even bigger than his biceps – and kisses him on the lips. He holds the kiss for a few seconds. When the triumph of romantic friendship ends, they do not pantomime disgust, or turn their bond into fodder for juvenile humor. They start to dance.

The kiss was not only illustrative of the spiritual romance between two enormously talented musicians; such a romance conceived beautiful children like “Spirit in the Night,” “Rosalita (Come Out Tonight),” and “Jungleland.” It was a physical expression of the spirit that energizes all of Springsteen’s music – a spirit of community, harmony, and unity. The music of Springsteen, in its highest moments and even in its lowest, gives aural projection to the faith of human togetherness. It denies category and classification, and it evades all attempts to stratify. Differences of race and sexual orientation are for the petty and puny. The Boss and The Big Man had no time for them.

Bruce Springsteen still has not time for them.

On April 8, the legendary singer and songwriter released a now viral statement in which he announced the cancellation of his concert in Greensboro, North Carolina in response to the state's passing of the “Public Facilities Privacy and Security Act,” which imposes strict and rigid limits on what bathrooms transgender people are able to use. It also betrays its euphemistic name by expressly stating that workplace protections against employment discrimination do not extend to gay citizens. In North Carolina, an employer can fire a gay worker on the sole basis of his sexuality, leaving the terminated employee with little to no recourse. It also places undue burdens on gay and trans workers seeking to sue for other workplace human rights violations, such as sexual harassment and the creation of a hostile environment.

In his statement, Springsteen said of the law, “To my mind, it’s an attempt by people who cannot stand the progress our country has made in recognizing the human rights of all of our citizens to overturn that progress. Right now, there are many groups, businesses, and individuals in North Carolina working to oppose and overcome these negative developments. Taking all of this into account, I feel that this is a time for me and the band to show solidarity for those freedom fighters.”

All “freedom fighters” should join Springsteen in supporting the efforts to write the same ending for North Carolina’s exhibition of bigotry. If Springsteen is able to expedite the delivery of justice, he can add it to his impressively long resume of brave advocacy for gay rights, dating back to earlier days of his career when support for gay causes and people was often an anathema.

If the kiss with Clarence was a confrontational announcement of the singer’s comfort with sexual ambiguity, Springsteen’s subtle and little-known support for disco musicians was an investment of his labor in resistance to the cultural superiority straight, white Americans often feel they enjoy by default. To combat what Springsteen labeled the “veiled racism and homophobia of the anti-disco movement,” he wrote “Protection” for Donna Summer. He also played lead guitar and sang backup vocals for the recording session. Considering that there was significant overlap between Springsteen’s fans and adherents to the pro-rock, anti-disco mentality, the small expression of artistic solidarity with the “Queen of Disco” was meaningful in its defiance.

In 1987, Springsteen released one of his greatest compositions, “Tougher Than The Rest.” The country-styled love song subverts the prevalent mentality of macho insensitivity in American culture. Rather than placing a premium on physical feats of strength and laconic dullness to human life, Springsteen sings he is “tougher than the rest” because he is willing and able to walk the “thin line” for the object of his affection. He is comfortable making sacrifices for his lover, and prizing her desires equally to his own. The celebration of mutual pleasure and devotion took on even greater power in the music video. Springsteen sings the simultaneously steely and sweet lyrics in his husky voice. Interspersed with the live concert footage are images of couples kissing and holding hands. Many of the couples are gay.

Not only does the video assign equal attention and value to heterosexual and homosexual relationships, it appraises the love between gay people according to the same standards as it does Springsteen’s own romance. The live footage is most memorable for the way in which he, and his backup singer and soon-to-be wife, Patti Scialfa, gaze into each others’ eyes. Their sexual fire is hot enough to melt the monitor. The energy and intensity of gay attraction and affection is no different – better or worse – than the lust and love Springsteen shares with his girlfriend.

One of the most profound, sad, and beautiful songs of modern American music is the Oscar winning, Grammy winning, “Streets of Philadelphia,” which Springsteen wrote for the Tom Hanks-Denzel Washington film "Philadelphia." The film tells the story of a gay man facing employment discrimination after his diagnosis with HIV. It is this exact form of bigotry and hostility that North Carolina is now giving official seal of approval with their new law. “Streets of Philadelphia” is not political, however, as much as it is purely and powerfully human. A man sings of wasting away in his own skin and clothes, unable to recognize himself when he sees his own skeletal reflection, and suffering the loneliness of familial and communal abandonment. Springsteen’s quiet, but desperate delivery over a soft beat and organ transforms the song into a prayer whispered into the night from a hospice unit. One of the most heartbreaking lines of any song begins the bridge. Springsteen sings, “Ain’t no angel gonna greet me…”, as he acknowledges the private catastrophe and crisis of his own solitary death. His only hope for solace and comfort is in the kiss of his lover – “Receive me brother with your faithless kiss…”

The beautiful human gesture of union – the kiss – is exactly how Springsteen displayed the bond of friendship he enjoyed with Clarence Clemons, and he returned to the idea and image of connection in his song, “This Hard Land.” An anthem of hope against the harsh winds of the world as it throws the debris in his face, he ends with a promise of faith for the subject of the song – a man who is just as easily a friend or lover:

Well hey Frank, won't you pack your bags and meet me tonight down at Liberty Hall
I just want a kiss from you my brother and we'll ride until we fall
We'll sleep out in the fields, we'll sleep by the rivers, and in the morning we'll make a plan
Well if you can't make it, stay hard, stay hungry, stay alive if you can and meet me in a dream of this hard land

One of the songs that has most confused many of Springsteen’s fans is “My Lover Man.” When I conducted research for my book, “Working On a Dream: The Progressive Political Vision of Bruce Springsteen,” I remember finding amusing the great lengths many middle aged, male Springsteen fans would go to avoid recognizing the obvious. “My Lover Man” is a gay love song. “You treated me hard and my heart ache,” Springsteen sings, “I know you’re only human, and men they make mistakes.” Springsteen then invites his bisexual or closeted lover to return home: “Your life with her turned black, and now you want our love back / Well come into my arms and fall, my lover man.”

Longtime fans speculated that it was song he wrote for his wife to record, but cannot explain why he then recorded it, and Scialfa never did. The truth seems that just as Springsteen has written songs in the voice of women, he narrates “My Lover Man” as a character – a gay character whose sexuality is not odd or immoral, but entirely normal and worthy of serious emotional treatment.

Different does not mean deficient. One senses the joy Springsteen feels when he delights in that reality during a duet with Melissa Etheridge for her mid-‘90s television special. Springsteen grins with the pleasure and mischief of a child when the outspoken lesbian singer delivers all the lascivious lines toward Mary in “Thunder Road.”

In a 1996 interview with the Advocate, Springsteen discusses early friendships he enjoyed with gay men after high school, and how he aimed to leverage his “very straight image” and “big guy audience” to make it appear safe for heterosexual men to align with gay rights.

Springsteen’s bravery of political and musical friendship with gay Americans had an unquantifiable, but real influence.

I can offer only my own life as evidence. Unlike most of my peers, I fell in love with the music of Bruce Springsteen at the age of 13. It was the late 1990s, and many of my friends had not even heard of the legendary songwriter and performer, but I elevated him to the status of hero – a particularly masculine hero. Springsteen’s voice, style, and lyrical content projected an image of masculine strength and cool. I hoped to acquire some of that virile charisma in my own travails with young women.

Springsteen, with his combined emphasis and focus on strength and sensitivity, and with his dramatic and epic depiction of sexuality, was a good pop cultural guide for my own sexual awakening in high school. His comfort with gay symbolism informed me, as a straight young man working overtime to impress all the pretty girls, that homophobia was not an indicator of toughness or hipness. It was a pathetic sign of weakness. Springsteen had the confidence in his own sexuality and masculinity to sing in the voice of a gay man, and to kiss his male friend on stage. Those straight men who feel that the stability of their identity requires hatred and harassment of homosexuals must suffer from such severe self-doubt, it almost makes their lives seem more sad than offensive.

“Tougher Than The Rest” reinforced the lesson that masculine strength and pride result from personal strength, but also sensitivity toward the desires of women, while songs like “Streets of Philadelphia” and “My Lover Man” instructed that gay people – in their human value and in the legitimacy of their love – are equal to me. Given that they are equal, they are just as deserving as I am of social respect, communal acceptance, and legal protection.

When he closes “My Lover Man,” Springsteen offers the hope that he and his lover will “begin to find our beautiful selves again.” America is the only country founded with the explicit promise of equality under the law, and the political guarantee of life, liberty, and the pursuit of happiness. It often fails to honor its foundational ethic and oath, but always has the opportunity to find its beautiful self again.