"The Chalkening" has gone too far: Trump's call for college supporters to arm themselves with chalk leaves campuses littered with racist messages 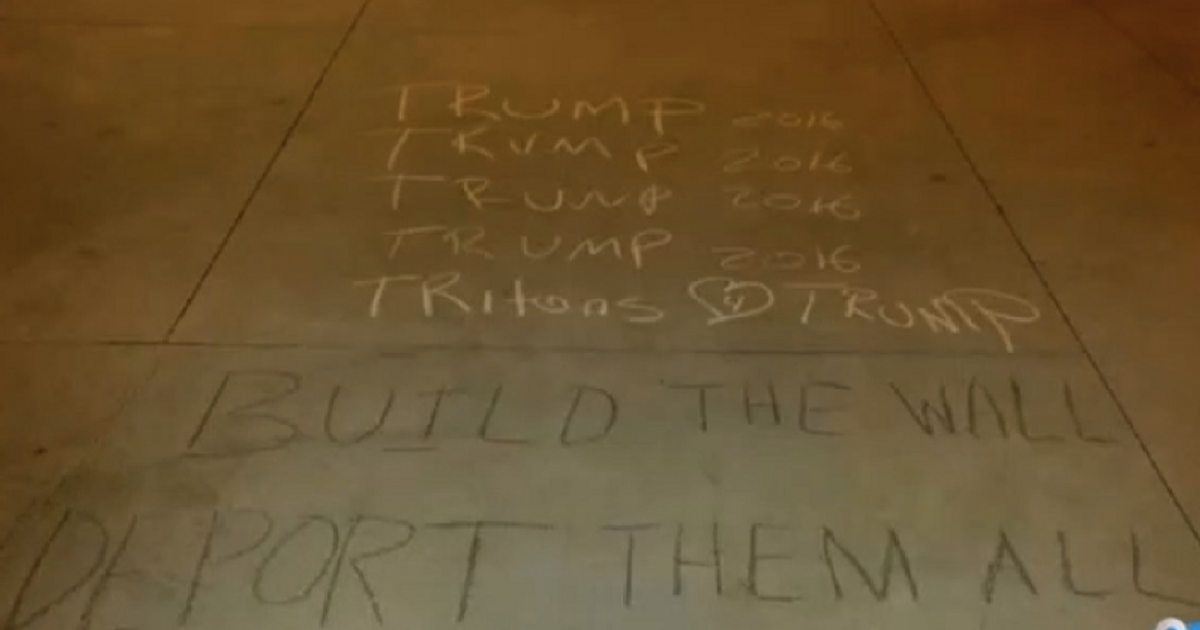 College Republicans seem to be having the resurgence that boy wonder and wonk Paul Ryan failed to inspire in 2012. The backlash to college campuses moving towards more progressive policies combined with the popularity of Donald Trump has resulted in a movement to take back the ubiquitous tool of public messaging on campuses nationwide, chalk, in an effort to promote the Republican frontrunner and his racist, anti-immigrant positions.

After students at Emory University in Atlanta protested against pro-Trump signs scrawled throughout their campus last month, arguing that such signage made them feel "unsafe," many conservatives mocked the students and pointed to the incident as the latest example of overly-sensitive liberal youth feigning offense. The Daily Caller described it as a movement to "strike back against college political correctness."

But the Trump campaign, ever the outfit of a brilliant marketer, jumped on the controversy to urge similar acts of support for Trump on campuses across the country, dubbing the effort "The Chalkening":

The day after the 48th anniversary of Martin Luther King’s assassination, a photo surfaced of a sculpture of the civil rights icon wearing Trump's signature red "Make America Great Again" hat on the campus of Tampa's University of South Florida :

According to Newsweek, similar chalk signs have cropped up on the campuses across the country:

A Mexican American student at Scripps College in Claremont, California, recently woke up to "#trump2016" scrawled on the whiteboard outside her dorm room, reported the Los Angeles Times.

And while students at UC San Diego hosted prospective freshman this weekend, "five white men wearing hoods" were reportedly seen leaving pro-Trump messages in front of several student cultural centers meant to provide a welcoming environment for a diversifying campus.  Prospective UCSD students and current students were greeted with messages that read “Build the wall” and “Deport them all,” along with “#DonaldTrump” and the claim that “The Mexicans will pay for it.”

Students at UC San Diego are planning a march against Trump on April 13. Meanwhile, more than 5,000 students in 200 chapters in 40 states have joined the group "Students for Trump."

When students at Loyola Marymount University in Los Angeles attempted to erect a wall protesting Trump's anti-immigrant rhetoric and declare that "no human being is illegal," pro-Trump supporters defaced the wall with "Trump" and "Deport all illegals" written over the massages of inclusivity, including a bible quote.