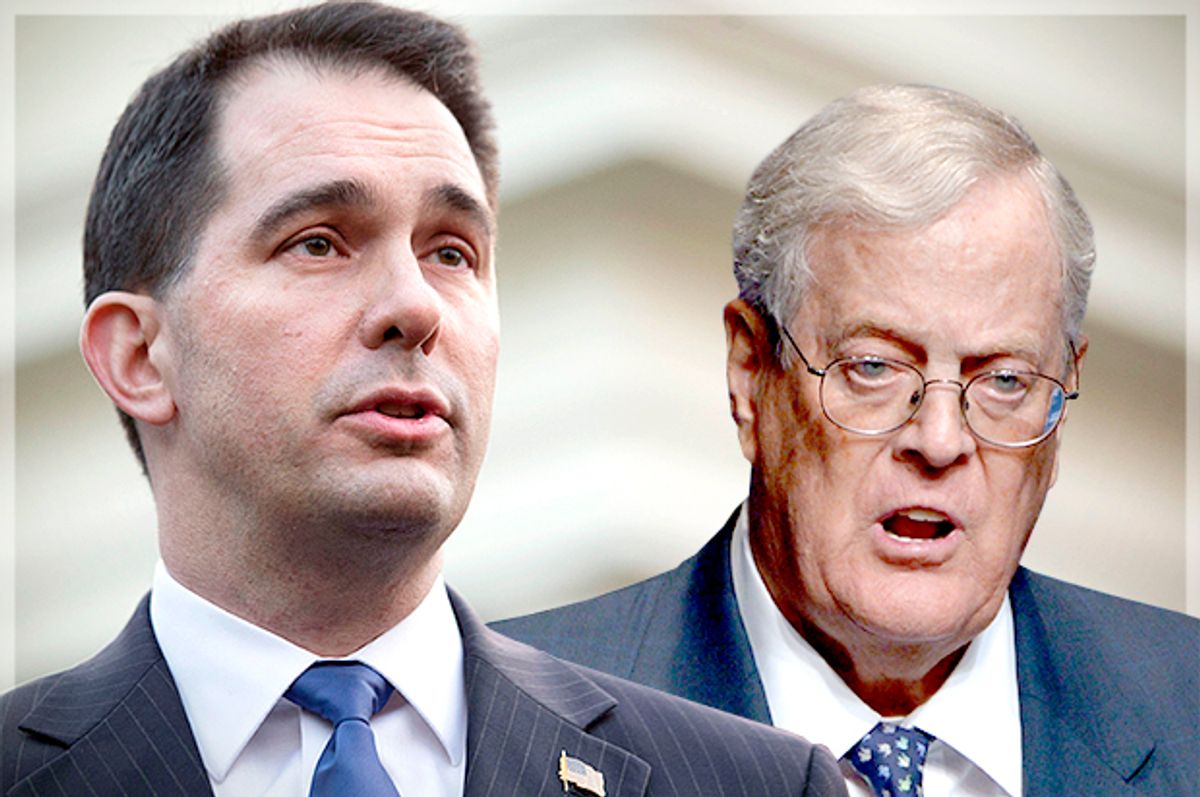 By now it should be more than obvious. Republicans continue to push for new voter ID laws, which, of course, they publicly insist are all about weeding out rampant voter fraud, even though the likelihood of significant voter is virtually nil.

Over the last four years, however, one GOP operative after another has proved the adage that you can't keep a secret among a large group of people. Indeed, they continue to blab about the true motive behind voter ID laws -- that it's all about disenfranchising Democratic voters and keeping turnout low. The fewer Democratic voters, and, yes, the lower the overall turnout, the better Republicans fare.

Last week, Glenn Grothman, a Republican congressman from Wisconsin, added his name to this growing list of mid-level conservatives spilling the beans about the true intention of these laws. And it wasn't Grothman's first time. We'll circle back to him shortly. In addition, a former Republican named Todd Allbaugh, an ex-staffer for Wisconsin GOP Senator Dan Schultz, told MSNBC's Chris Hayes that he witnessed Republicans acting "giddy" over disenfranchising Democrats, stripping them of their constitutional rights.

TODD ALLBAUGH: I've been a Republican for a long time. It was at that moment, Chris, in that room in the senate Republican caucus when I heard people, a Party I had fought for for over 30 years of my life, actually giddy and happy and talking about how we can take people's Constitutional rights away, or at least impede them, in order to hang onto power. [...]

Now, you have a group of people in the state legislature, particularly in the senate Republican caucus, who want to impede peoples' voting rights. That's the point where I said "I can't do it anymore." I can't be a Republican, I can't keep going to caucuses because this Party no longer represents me and what I believe in. [...]

Republicans used to fight for voting rights, and here they were taking them away. So, yes, the point is, this was a poignant point in my life. I remember it clearly and certainly the point in that room that day was how do we do this quickly because there was a lot of recalls going on in Wisconsin at that time. How do we do it quickly so that we can make sure we hang onto power in the future.

Allbaugh has it exactly right. The GOP is engaged in one of the most Orwellian schemes ever to hit the mainstream. While appearing to stand up against fraud, which only exists about 0.00000013 percent of the time -- that's 26 cases out of 197 million votes cast according to a Bush administration investigation -- the Republican Party is stripping millions upon millions of Americans of their right to vote.

Heaping more tragedy onto the fire, there's really nothing that's being done to hold Republicans accountable, in a legal sense, for this obvious party-wide conspiracy.

Thirty-three states, mostly Republican-controlled, now require some form of voter ID at polling places. In other words, thanks to this nefarious GOP disenfranchisement plot, more than half the nation is required to pay a fee while potentially losing additional wages from lost work in order to vote. Does anyone seriously believe that Donald Trump's or Ted Cruz's best voters are unable to pay those fees or can't afford to take a half-day off work in order to visit the DMV?

Oh, and by way of a refresher in terms of how truly ridiculous some of the voter ID laws really are, the Texas voter ID law, for example, requires an ID in order to get a special voter ID. In order to vote, citizens of the Lone Star State will have to present a photo ID or else they won't be able to vote. The ID has to be one of the following:

If you don't have one of these forms of identification, you'll have to apply for an Election Identification Certificate (EIC). But in order to acquire an EIC, you have to present your proof of citizenship and a second form of identification. Yes, that's right, you'll need to get an ID in order to get an ID -- one of many reasons why this law is so completely ridiculous. And all of this on top of the normal voter registration process (which only requires a Social Security Number). To compound problems, 90 counties in Texas don't have Texas Department of Public Safety offices, where the IDs are acquired.

When the 2014 midterms rolled around, officials in Texas warned that as many as 600,000 registered voters in the state were at risk of being unable to vote because of the onerous restrictions. That meant, for example, a close race like the House race between Republican Will Hurd and incumbent Democrat Pete Gallego was thrown to the Hurd by a margin of around 2,500 votes. Yet, as NBC News reported, roughly 17,000 voters in Gallego's district were disenfranchised by the law -- more than enough to swing the election to the Republican challenger.

We all know Republicans are doing this, yet nothing is happening to stop them. Along those lines, let's dig into Grothman and the roster of others who've confessed. At a victory party following Ted Cruz's crucial win in Wisconsin last week, Grothman said:

“Hillary Clinton is about the weakest candidate the Democrats have ever put up and now we have voter ID and I think voter ID is going to make a little bit of a difference as well.”

It's the second time Grothman has opened up about this topic. Rewind to 2012:

KEYES: If it were upheld and in place in time for the November election, do you think — polls have shown a pretty razor-thin margin — do you think it might ultimately help Romney’s campaign here in the state?

GROTHMAN: Yes. Right. I think we believe that insofar as there are inappropriate things, people who vote inappropriately are more likely to vote Democrat.

KEYES: So if these protections are in place of voter ID, that might ultimately help [Romney] in a close race?

GROTHMAN: Right. I think if people cheat, we believe the people who cheat are more likely to vote against us.

Meanwhile, between 2002 and 2012, there were only about 13 cases of voter fraud out of tens of millions of votes cast.

While we're here, who else has blabbed? Via Right Wing Watch:

"Voter ID, which is going to allow Governor Romney to win the state of Pennsylvania: done,” he said.

"Democrats promote early voting for the same reason they oppose voter ID: because they view early voting as helping their side. In the absurdly long 35-day period of early voting in Ohio in 2012, Democrats racked up perhaps a million-vote advantage over Republicans before Election Day was ever reached. Republicans have been slow to realize how early voting helps the Democrats."

"Now we are to have Sunday voting at South DeKalb Mall just prior to the election. Per Jim Galloway of the [Atlanta Journal-Constitution], this location is dominated by African American shoppers and it is near several large African American mega churches such as New Birth Missionary Baptist. Galloway also points out the Democratic Party thinks this is a wonderful idea – what a surprise. I’m sure Michelle Nunn and Jason Carter are delighted with this blatantly partisan move in DeKalb."

Participation in the democratic process should be simple and universal. But, once again, fear of skin color is being exploited in order to win elections for Republicans. Coupled with the well-worn Southern Strategy, one of the two major political parties in America is oppressing minority voters in an attempt to win elections.