"The Virgin Mary was actually a prostitute": Cartoonist Chester Brown wants to open a debate about sex work, Jesus and the Bible 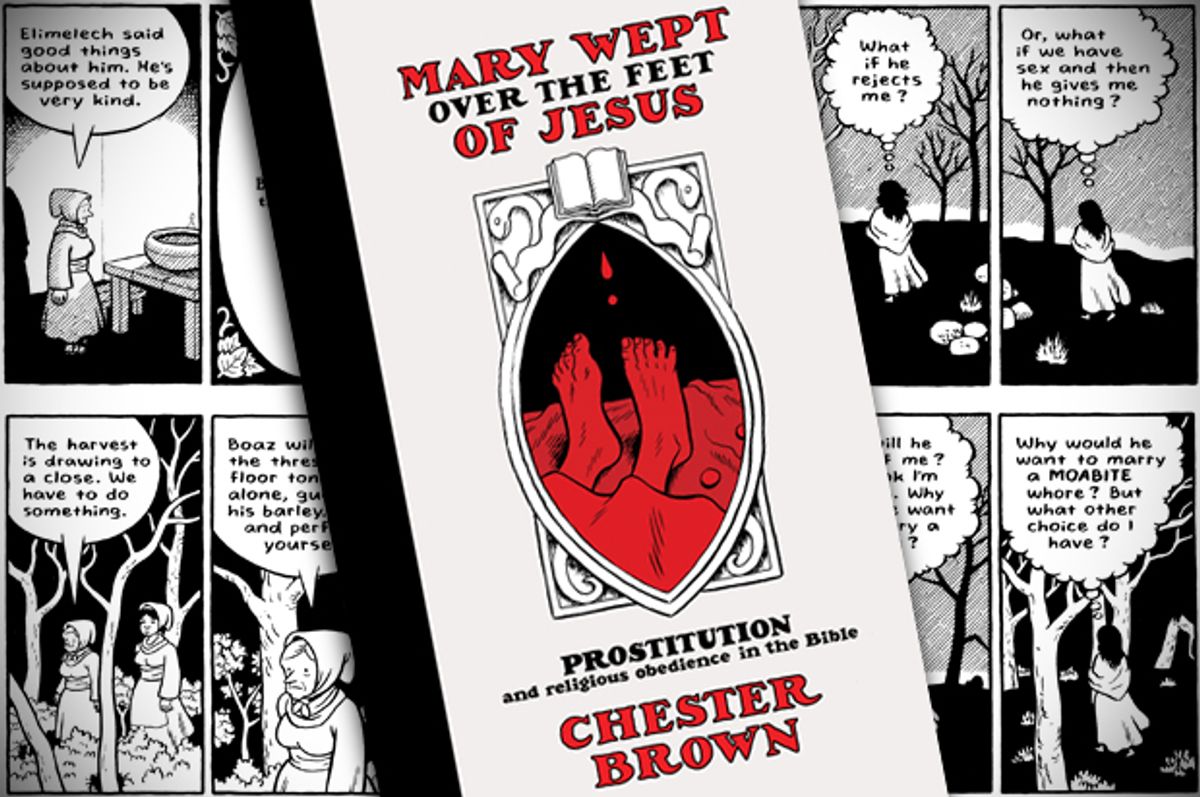 For ages there has been speculation, scholarly and otherwise, about the place of prostitution in the Bible. The world’s oldest profession shows up in both the Old and New Testaments, and enough ambiguity surrounds its treatment that many see the issue as more complicated than the way Christian churches describe it today.

One of these questioners is Chester Brown, a veteran cartoonist who has used scholarly research to come up with “Mary Wept Over the Feet of Jesus: Prostitution and religious obedience in the Bible.” The book, published by Drawn & Quarterly, it not a work of scholarship, but an interpretation, both serious and funny. It includes stories about Ruth, Bathsheba, Tamar, Job, and, of course, Mary of Bethany. Brown doesn’t tell these stories to demean the women involved: he advocates for the legalization of sex work and respect for its practitioners. (He describes the roots of his thinking at length in notes for the book.) “Mary Wept” is in some ways an extension of Brown’s last book, “Paying For it,” about his many adventures as a john.

We spoke to Brown – whom Jonathan Lethem has called “one of our greatest cartoonists ever” – from his home in Toronto. The interview has been lightly edited for clarity.

Where did you first get a sense of prostitution in the Bible and how widespread it was?

It’s no secret -- there are quite a few Biblical characters who are prostitutes. The significant thing for me was when I first had that sense that perhaps the Virgin Mary was a prostitute. The book that prompted that thinking was called “The Illegitimacy of Jesus,” by a Biblical scholar named Jane Schaberg. Her theory was that Mary – the mother of Jesus – was a rape victim, and she pointed to the existence of these women in the genealogy for Jesus in the Gospel of Matthew – the odd fact that Tamar, Rahab, Bathsheba and Ruth are all mentioned in there even though women are nearly never mentioned in ancient genealogies. There are several other women who could have been mentioned, but Matthew, or whoever wrote that gospel, seemed to be focusing on women who were involved in some kind of sexual impropriety. And that indicated to me, once I rethought the theory, not that Mary had been raped, but that she had been involved in some sexual impropriety.

Since at least two of those women, Rahab and Tamar, had been prostitutes, I think that’s what Matthew is saying – that the Virgin Mary was actually a prostitute. That’s what got me thinking in a different way about prostitution in the Bible.

How is prostitution typically depicted in the Bible? In a disapproving and moralistic way?

There’s a later story involving the famous strong man Sampson, who visits a prostitute, and you don’t get a sense that he’s breaking the rules here and should be punished. I don’t recall a Biblical law against paying for sex. But it’s not like prostitution is viewed as a good thing. It’s frowned upon in the Bible.

How long have you been interested in the Bible and ancient civilizations?

I guess I’ve always had a general interest in history. I grew up in a Christian household. In my early 20s, I started to have my doubts, and wasn’t going to church regularly. And then I met a young woman who was interested in me romantically.

And early on she told me she was a Christian, and asked me if I was a Christian too, and I said, “Oh yes, of course I’m a Christian.” But despite growing up in a go-to-church-every-Sunday-family, I didn’t have much sense of what it meant. So I decided to read a few books on the subject. I read one book of Biblical scholarship, and found myself completely fascinated… And that fascination really has never waned…

Your previous book, “Paying for It,” is also about sex work and your own relationship to it. Can you describe the book a little bit for people who’ve not read it?

In the late ‘90s, when I would have been in my late 30s, I was involved with another woman, and she broke up with me, and I decided, “I don’t think I like being in boyfriend-girlfriend relationships. I don’t think I want to look for another girlfriend.” But of course I still wanted sex. So I decided to start paying for it. That started in the late ‘90s and continues until today. I still pay for sex on a regular basis, Although in 2003 I met a particular sex worker and started seeing her regularly. I guess it’s been 13 years now, I’m actually going to seeing her tonight.

I’m very happy paying for sex. I don’t know: I seem to like this better than being in romantic relationships.

How do you want people to come away from your latest book? Do you want them to look back at the history of sex work in a different way?

Mostly, the book is Biblical interpretation, and I’m pushing certain ideas. My contention is that Jesus had a different relationship with prostitution than we think he did. I think his mother was a prostitute, and I think he had women around him who were also prostitutes. And that there was some sort of religious association there, involved with religious prostitution and goddess worship and that sort of thing. So yeah, I guess I’m trying to stimulate a debate about the subject and get people thinking that it was perhaps a possibility.

Have you discussed your ideas with mainstream Christians and gotten a sense of how it strikes them? Have people gotten angry as you’ve talked about it?

I’ve really only talked about it with friends of mine, and most of my friends are not that religious. I do have one very good friend who is a Christian, who is obsessed with the subject, as I am too… When I told her about the idea of the book, she was very offended, which is not surprising. When I was done the book, before it was published, I gave it to her… She was very offended, and found it blasphemous. But for some reason we’re still friends anyway.