"We are attempting to practice law here": Trial without end in Guantánamo

Inside America's most notorious military prison 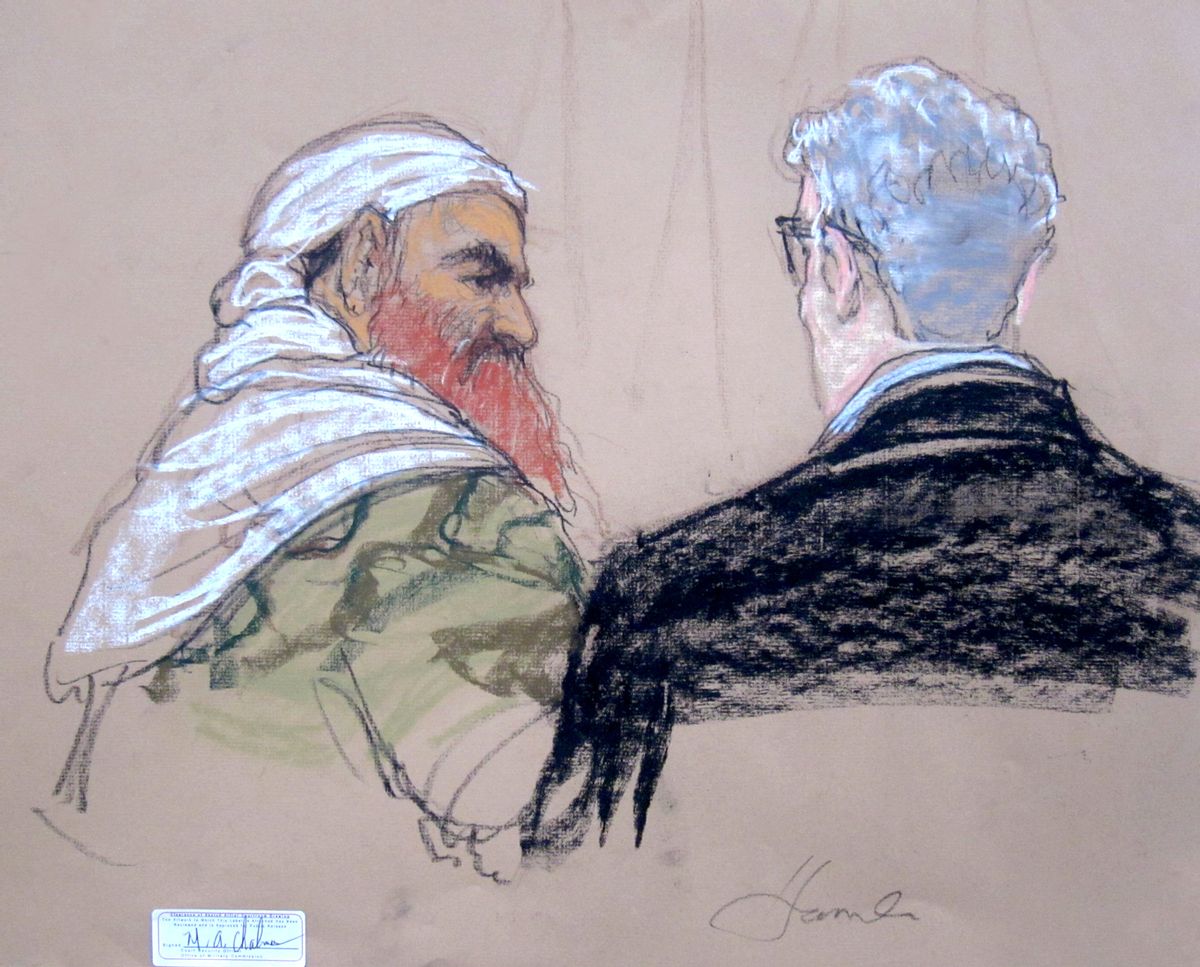 In this pool photo of a Pentagon-approved sketch by court artist Janet Hamlin, defendant Khalid Sheikh Mohammed, left, speaks with lead defense lawyer David Nevin during a pretrial hearing at the Guantanamo Bay U.S. Naval Base in Cuba, Monday, April 14, 2014. A lawyer for one of five defendants in the Sept. 11 war crimes tribunal said Monday that FBI agents questioned a member of his defense team, apparently in an investigation related to the handling of evidence, a revelation that brought an abrupt halt to proceedings. (AP Photo/Janet Hamlin, Pool) (AP)
--

"We are attempting to practice law here,” Cheryl Bormann said.

The defense attorney’s response to Judge James L. Pohl in a war court hearing was something close to resigned capitulation from a lawyer who appears to have concluded she cannot provide an adequate defense for a client facing execution by the state.

Colonel Pohl is the military judge presiding over the trial of Khalid Shaikh Mohammed and the other four “high-value detainees” charged with mass murder, conspiracy to kill Americans, and other terror crimes related to the 9/11 attack on the United States. Mohammed, frequently referred to as KSM, is the admitted intellectual author of the attacks.

Bormann is the learned counsel, or senior civilian death-penalty lawyer, for Walid bin Attash, a 36-year-old Yemeni who allegedly ran an al Qaeda training camp in Afghanistan, where two of the 9/11 hijackers trained. Each of the accused is provided one civilian lawyer with capital-defense trial experience to direct the judge advocate general (JAG) military attorneys assigned to the case.

Bormann’s oral argument on a motion she abruptly made in court was a cogent critique of a failed system. After four years of endless motions, fights over discovery, unprecedented FBI meddling in what is the most consequential terrorist prosecution in the nation’s history, and her inability to secure for her client even the most basic procedural rights, she seemed to have concluded that under the existing system, the case is injusticiable.

Bin Attash has been trying to fire Bormann and another civilian member of her team for months, Michael Schwartz, who left an Air Force career to work as a DOD attorney rather than accept a transfer and leave a case he has worked on since 2012.

Bin Attash, not a client lawyers are lining up to defend, had sent the judge a letter asking him to dismiss his defense team. After conveying a second letter to the judge during the hearing, he asked if the guards could take him back to Camp 7, where the high-value detainees are held.

A lot was unfolding in a short time during the hearing, one of 10 held in the second two weeks of February. Bormann was trying to sever herself from the case. Prosecution team attorney Ed Ryan told the judge Bormann didn’t have good cause. The judge announced that he was requesting an independent counsel to help bin Attash get beyond the representation impasse. And bin Attash was crafting his own solution.

He would borrow a lawyer from one of the teams defending the other four 9/11 detainees: “a temporary attorney being assigned and, for example, with the approval of one of my brothers . . .”

“This order regarding the independent counsel,” he said, “I have no idea how long that’s going to take until there is an attorney appointed. And the judge is aware of the problems regarding the clearances that the attorneys face. This problem could take forever.”

When a defendant facing the death penalty complains about delay, your case is in the ditch.

To accommodate the religious sensibility of her client, Bormann wears an austere Saudi-style black abaya that leaves only her face and hands exposed when she meets with her client or appears in court. From a podium facing the judge, she described a series of incidents that had eroded bin Attash’s confidence in his attorneys.

Joint Task Force-GTMO guards had seized his privileged communication and personal notes, after he had been assured they were protected.

Bormann had assured bin Attash that they would examine discovery material together to plan his defense, but he was denied access to much of the material because it had been classified.

“We asked to get their laptops back so they he could access Word documents and manipulate discovery to help us prepare for the case going forward,” she said. “That has been denied by the government.”

Defense attorneys requested telephone access for bin Attash so he could call them when had problems. The government opposed the request and the court has yet to rule.

“I made representations to him which in every other court of law, in every other scenario, would have been true, and turned out not to be true,” she said. Now her client no longer trusts her.

The judge denied her motion.

Delay and the MCA

This, of course, is a court unlike any other court of law. Early in the Obama administration, then-Attorney General Eric Holder announced that KSM and his four alleged co-conspirators would be tried in federal district court in New York. Protests from congressional Republicans led by South Carolina Senator Lindsey Graham, and then–New York Mayor Michael Bloomberg, thwarted the effort. So the five 9/11 detainees are being tried under the Military Commissions Act, passed during the Bush administration and revised after Barack Obama took of office. Perhaps it is an unintended consequence of the MCA, but delay appears to be programmed into the process, as issues such as access to laptops, the right to contact attorneys by phone, clothing the defendants wear in court, and female guards managing the prisoners, are moved, briefed, and litigated.

Pre-trial hearings (the actual trial hasn’t started) also are complicated by what a former general who helped run the prison described to The Miami Herald’s Carol Rosenberg as “a slow-motion Berlin Airlift.” When hearings are scheduled, five defense teams, each led by learned counsel from private law firms across the country, convene at Joint Air Base Andrews on the outskirts of Washington, D.C., to catch a government-chartered flight to the naval base on the southeastern tip of Cuba. The teams include paralegals, translators, mitigation specialists, couriers responsible for classified material, and other support staff. A fully staffed prosecution team led by a brigadier general travels on the same flight.

If the judge suspends the hearings, usually scheduled in two-week blocks, for an unanticipated legal issue, the plane is summoned and everyone is returned to Joint Base Andrews.

What you don’t know

Which is predictable. The prosecution, in this case, is also the guardian of what it considers national-security secrets. Defense counsel argues that it has a compelling need to see the documents on which the government will build its case.

For example, Chief Prosecutor Brigadier General Mark Martins told reporters that his staff is working seven days a week at a secure facility in the Capitol, poring over 6.3 million documents that were the source material for the Senate Select Intelligence Committee’s 2014 report on the CIA’s clandestine detention and interrogation program. Prosecutors determine what they will provide the defense.

Before arriving at Guantánamo, each of the defendants on trial had been held in a secret CIA “black site,” tortured, and interrogated. Each of them is referenced in the Intelligence Committee’s “torture report.” Jay Connell, the senior defense attorney for KSM’s nephew Ammar al Baluchi, who is charged with funneling over $120,000 to the hijackers, said defense counsel should have equal access to the material prosecutors are reviewing in the Capitol.

All defense attorneys have security clearances, he said, and access to a sensitive compartmented information facility [SCIF] in the Washington, D.C., area that holds “the nation’s greatest secrets.”

Without direct access to original source material, the defense counsel is left to work with documents, or in some cases, summaries of documents, provided by the prosecution.

He cited one example.

“Logically speaking, in a black site, after they have tortured these men, they sit down and write up their notes,” Nevin said. Or, he added, they would make a videotape.

One issue that will be raised is “to what extent does the three years of torture taint testimony” the government will introduce. Detailed information that could be important in defending a client could be lost in a summary prepared by the prosecution.

Hollywood in a war court

A film Connell screened in court suggests the sort of detail the defense attorneys claim is pared away or withheld by prosecutors.

His client Ammar al Baluchi was arrested by Pakistani authorities in Karachi in April 2003, then within a week turned over to the CIA and moved to black sites in Afghanistan and Romania, where he was interrogated and tortured. In court Connell screened two clips from the emotionally wrenching “torture room” scenes that comprised the first half hour of the Hollywood release "Zero Dark Thirty." And a subsequent clip in which the bewildered captive is being served lunch by his CIA torturer and a female debriefer who had sat in on the torture sessions, as they thank him for the actionable intelligence he provided them after they kept him awake for 96 hours.

“Ammar” in the film, Connell said, is his client.

Ammar al Baluchi. The viscerally wrenching Hollywood torture sessions Connell screened in the courtroom depicted an interrogator beating the bloodied head of his subject with a truncheon, pouring water down the subject’s throat to simulate drowning, immersing the man’s head in iced water pooled in a tarp, hanging him by his wrists, forcing him to stand on small mat on the floor and beating him if he stepped off, and finally, cramming the broken subject into a small wooden box as he screamed for relief.

The lm supported a motion Connell had led requesting the judge to order the CIA to release information the agency provided to the producer and director of "Zero Dark Thirty."

The defense team had analyzed information in two public government documents and concluded that two CIA agents had met with the producer and director of the lm 23 times.

Connell described them as “Agent A” and “Agent B”—his client’s torturer and debriefer.

Information about al Baluchi being forced to stand on a small mat or face a beating if he stepped off, and the use of a tarp to immerse his head in iced water was not in the public domain until 2014, but it was in a lm released in 2012.

The only source of this information about his client’s torture was the agents or agency responsible for the torture. Connell had identified 150 e-mails between the CIA and the producer and director and was requesting the prosecution to provide him “all communications between the government and 'Zero Dark Thirty' filmmakers.”

An attorney for the government told the judge the specific documents Connell requested could not be located.

“The motion I argued today was led two years ago,” Connell told reporters after he left the courtroom. “To this day, the writer and director of the movie have more information about classified material related to my client than his defense team does.”

The document demand, like many others, remains unresolved and subject to further action.

Shortly after the plane landed in Guantánamo, Connell had responded to a reporter’s question about when the pretrial would end and the trial begin.

This piece was originally published in The Washington Spectator.