Countdown to the GOP primary's final showdown: Why California could decide who wins the nomination, and why that's bad news for Republicans

Donald Trump can't possibly clinch the nomination without California. This is about to get ugly

Everybody's watching New York's GOP primary right now and it's a lot of fun for political junkies. It's happening in the center of the media universe where the coverage is smart and interesting, and it's Trump's home state so he's reveling in the love his fans pour all over him. But even if he wins New York in a blow out he cannot possibly get to the required 1237 delegates until the big prize in California in June. So eyes are suddenly turning to the delegate-rich behemoth, where, for once, winning the primary is going to matter for the Republicans.  But what an odd state for them to stage their final showdown before the convention.

There is no bluer state in the nation than California these days. But it wasn't all that long ago that it was the spawning ground of Republican presidents. Two of the most important presidents of the 20th century, Richard Nixon and Ronald Reagan, came from there. The Reagan revolution was hatched in California, as was the anti-tax revolt that has been destroying the nation since the late '70s. In fact, it goes back a lot further than that, as Kathryn Olmstead wrote in her book, "Right Out of California: The 1930s and the Big Business Roots of Modern Conservatism," which Salon excerpted here.

Olmstead traced the political and business alliance that laid the groundwork for the GOP dominance that emerged after the Roosevelt coalition finally collapsed in the wake of the civil rights movement. She writes about the special interests that backed Nixon's anti-communist crusade that managed to cripple the left in the U.S. from the 1940s on, and makes this interesting observation about Nixon:

Along with his virulent anticommunism, Nixon’s attention to the politics of image marked him as a California product. With its weak party system, fondness for Hollywood glitz, and rootless, diverse residents, the state helped nurture a style of campaigning that emphasized appearance over substance. “What they’ve got isn’t a party,” a Democratic official told Theodore White in 1956. “It’s a star system, it’s a studio lot. They don’t run candidates—they produce them, like movie heroes.” Nixon was one of the first politicians to “embrace the new tools of political artistry” and “foster our current image-obsessed political culture,” as historian David Greenberg has said. Nixon and his public relations staff created an image of the candidate as a “populist everyman” and helped to unite the wealthy with the disaffected middle classes in a broad, successful coalition.

The trajectory of Ronald Reagan's career from actor to labor leader to paid shill for General Electric is well known. He too flogged the anti-communist party line on behalf of his corporate master and others which had been organizing themselves since the 1930s. And he was obviously the literal realization of the California star system.

If you want to blame any one state for the dominance of the modern conservative movement of the past 30 years, California is it. But what was once an incubator of the movement is now a Democratic monolith. Last August, I wrote about how Pete Wilson and the Republicans of the mid-90s destroyed their state party with xenophobia, and have never recovered. They foolishly allowed their baser natures to take over, and activated a large, young voting constituency, sending them into the arms of the Democratic Party.

Today, California is as Democratic a state as it can be, with super majorities in the state government, a Democratic governor, Democratic mayors of the two biggest cities, two Democratic Senators and large Democratic majority of congressional seats.

But just because they are in a minority doesn't mean Republicans don't exist. There are, for one, a few wealthy coastal Republicans in the state, who care about the environment and aren't hostile to immigrants, but they're all members of the 1 percent so there just aren't that many of them. The rest of the California GOP has been whittled down to a party as hardcore and extreme as anywhere in the country.

Recall that in the summer of 2014, when the federal government tried to bus in some child refugees from Central America, one of the ugliest anti-immigrant confrontations in years took place in Murrieta California with scenes like this all over the TV: 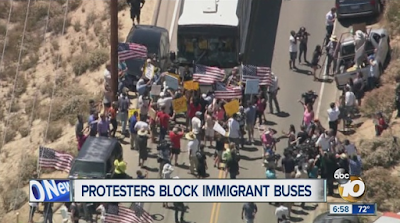 This is why Ted Cruz is in California this week, specifically in San Diego, which is just 60 miles from where those protests took place. Unlike his rivals, he has been working the state for months and he seems to be aware that this is a potentially fruitful state for him. The polls are close, with Cruz ahead in the very conservative central valley, Kasich with a lead in the Bay Area (but trailing badly everywhere else) while Trump dominates in Southern California beyond Los Angeles, undoubtedly because of his immigration stance.

But more importantly, the GOP delegate process in California is a byzantine maze of confusion which it is likely only Cruz's camp fully understands right now. According to Politico, "the state gives away three delegates to the winner of each of its 53 congressional districts — ensuring there will not be a single California campaign here but dozens of smaller ones, waged district by district." All three of the campaigns are staffing up and the independent Super PACs are moving in on behalf of both Cruz and Trump. They are planning to spend millions in advertising.

Considering the conservative ideology of most California Republicans these days, and the fight that Cruz and Trump will have to wage for those votes in the southern part of the state, it's probable that immigration is going to be central to this campaign. It's Trump's calling card and Cruz can't win if he doesn't engage it. And every ad, every rally, every interview that either of them gives on the subject in order to persuade these hardcore conservatives to vote for them will repeat what Pete Wilson's debacle did 20 years ago: inflame the majority and motivate it to vote against Republicans.

One of these men will win the GOP primary in California. But their ugly campaign will shrink the party further and probably wind up losing seats for their fellow Republicans down the ticket. But what choice do they have? The California Republican Party is a shadow of its former self, a rump faction that consists of a small number of moderate one percenters and a bunch of angry, frustrated extremists. The only way these presidential candidates can win is by destroying their party. And when you look at it that way,  it's clear that this problem isn't confined to California. You can easily say the same thing about the national election.