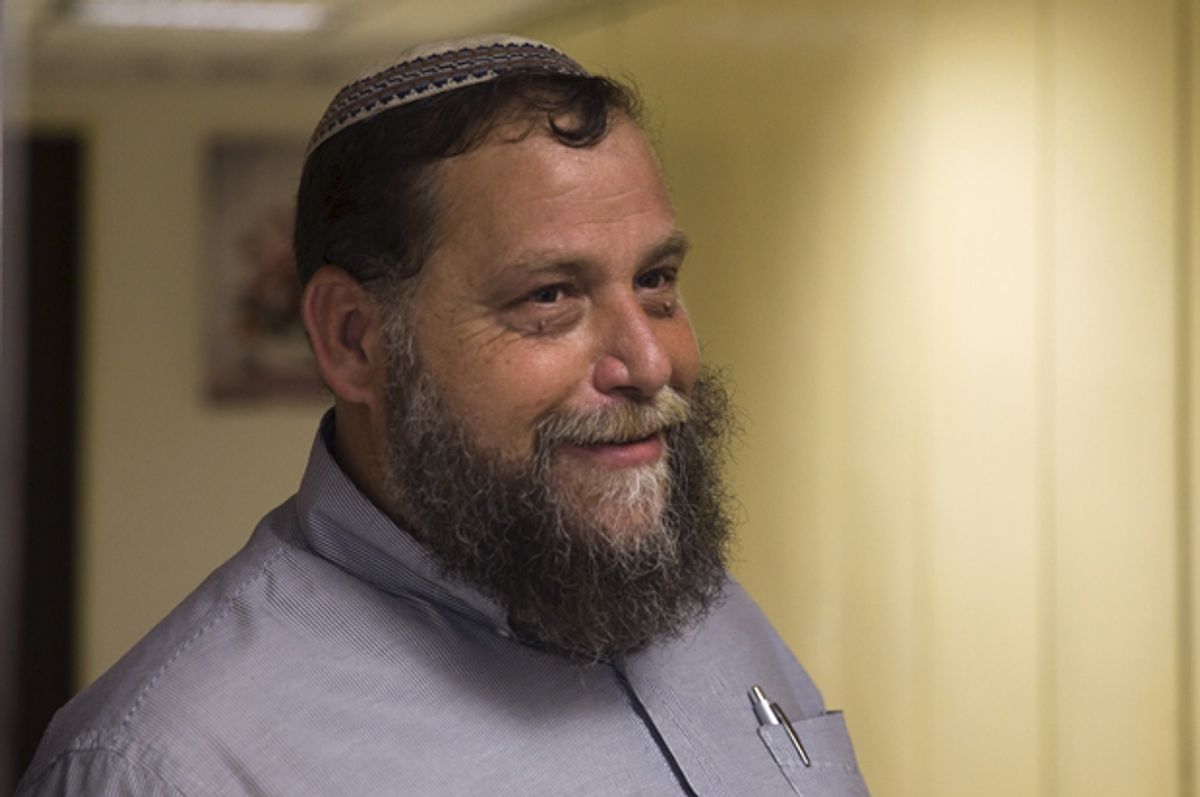 An Israeli court cleared a right-wing extremist of assault charges for attacking fellow Israeli Jews, because the extremist said he thought they were Arabs.

The extremist also threatened the Jewish men with further violence after being acquitted.

Benzi Gopstein — a leader in Israel's far-right, racist movement who harasses people in interracial relationships and calls for expelling "blood-sucking" Christians — attacked a prominent Jewish left-wing activist and his friend more than seven years ago.

When Gopstein saw the Jewish left-wing activists at an illegal Israeli settlement in the occupied West Bank, he said he thought they were Arabs who were planning to attack Israeli Jews.

It turned out, however, that Ezra Nawi, the Israeli human rights activist whom Gopstein attacked, is himself Jewish.

Nawi and fellow activist Daniel Dokorovich said they saw settlers throwing stones at Palestinian houses, so they decided to go to the settlers' houses to tell them to stop.

Gopstein responded by attacking them.

Witnesses captured the August 2008 attack on camera, and Gopstein was eventually taken to court on assault charges.

In court, Gopstein held by his argument, insisting he attacked Nawi and Dokorovich because he thought the men were Palestinians planning to attack Israeli Jews.

Ruling in Gopstein's favor, Jerusalem Magistrate's Court Judge Dov Pollock wrote that "the circumstances of the incident justify an acquittal."

"We must examine whether the incident in question constitutes an assault or self defense," the judge said, according to a YNet News report.

The judge admitted that illegal Israeli settlements in occupied Palestinian territory are segregated enclaves, noting that, had the two men trying to enter actually been Palestinians, they would have been breaking Israeli law.

On video, Gopstein can be heard calling Nawi a slur. The judge said in his verdict that the curse "may not be worthy of being spoken, but does not constitute a threat, and is protected under the freedom of expression given to any man."

The judge added to Gopstein, "the irony is that the video saved you."

Assaf Sharon, the left-wing activist who videotaped the attack, condemned the ruling. “Any reasonable person who watched the video clip and then read the verdict couldn’t help but be impressed by Judge Pollock’s acrobatics,” he said.

The far-right leader was elated at the ruling. "I'm very glad that after years of drawn out legal proceedings, the court found me not guilty," Gopstein said.

He insisted "I shouldn't have been put on trial; I was acting in self defense when I thought Palestinians and anarchists were entering the neighborhood [by climbing] over the fence."

After being acquitted, Gopstein openly threatened Nawi. "In hindsight, I should've beaten them harder, but maybe there'll be other chances," he said of the left-wing activists he attacked.

Gopstein's lawyer also commended the ruling. He called the left-wing activist "a man entirely devoted to provocation," maintaining "we're pleased with the decision of the court, which did not buy into [Nawi] and his anarchist friends' provocations."

Later, on Facebook, Gopstein wrote, “There’s no doubt my actions were justified, and when I saw Nawi and his gang breaking into the neighborhood, I defended the residents."

He added another threat. "Had I known it was Nawi, I believe I would have acted more forcefully," Gopstein said. "It’s time for the prosecution to put Nawi on trial."

Benzion Gopstein, who is also known as Benzi, is the leader of the far-right, racist, anti-Arab group Lehava.

Lehava, whose name is a Hebrew acronym for “Preventing Assimilation in the Holy Land,” has been described as “fascist” and “radical right-wing.”

The hate group is known for harassing and threatening Israeli Arabs who are in relationships with Israeli Jews. In the name of fighting “harassment,” the far-right group organized racist beach patrols that prevent Jewish women from socializing with Arab men.

Lehava has held huge hate protests outside of interracial Israeli weddings. The group is notorious for chanting "Death to Arabs!" at its rallies.

Members of the hate group have set fire to and vandalized the few remaining bilingual Hebrew-Arabic schools in Israel, and have organized boycotts of businesses that employ Palestinians.

In December, Gopstein insisted that Christians are “vampires and blood suckers” who must be expelled from Israel.

“Christmas has no place in the Holy Land,” he wrote in an article on an ultra-Orthodox website. “Let us remove the vampires before they once again drink our blood.”

In the past, Gopstein has gone so far as to publicly insist that setting fire to Christian churches in Israel is justified.

Many Lehava members, including Gopstein, are followers of Meir Kahane, a fascist Israeli-American leader who founded the extremist Jewish Defense League, which the U.S. government has called a “right-wing terrorist group.”

Investigative reports have found that Lehava members have received indirect funding and support from the Israeli government.