"They were selling hope to a lot of people in the middle of a recession": Retirees scammed by Trump Network speak out

Trump sold a "recession-proof" pyramid scheme during the 2008 recession, but the junk science vitamin co. flopped 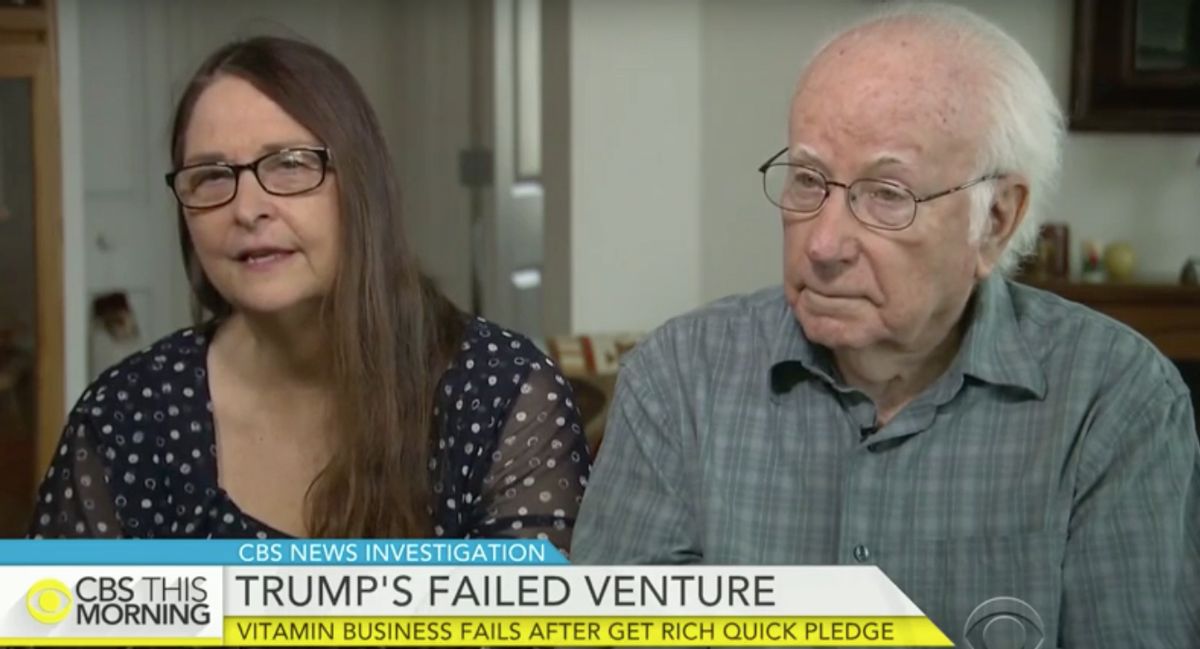 The "billionaire" businessman has branched out from a simple real-estate magnate to a purveyor of fine wine, thick steaks and trash reality television over the years, but those are only some of his most successful ventures. The home urine testing kits and customized vitamin packages are a few of his failed endeavors.

In 2009, Donald Trump launched a multi-level marketing scheme, in which companies pay salespeople commissions for selling products and recruiting more representatives, called the Trump Network, aimed at distributing vitamins customized for an individual after an at-home urine analysis is provided. According to Trump, the Network was intended to compete with other successful brands like Mary Kay and Amway.

“We’re gonna come out with new and different products,” Trump told a crowd of thousands at Miami's Hyatt Regency hotel as he launched The Tump Network. “They’re gonna be wonderful products.”

“When I did ‘The Apprentice,’ it was a long shot. This is not a long shot,” Trump assured at least 5,000 people gathered to hear about the latest Trump venture in November 2009. “This is going to be something that’s really amazing.” Trump would go on to travel the country for the next two years promoting the scheme. Here is how the Washington Post described it last month:

A Trump Network compensation plan shows that those in sales were promised big rewards for recruitment. A hypothetical example presented by the company showed that salespeople could build “levels” of salespeople under them and would earn commissions of $100, $25 or $20 each time a new recruit bought a business starter kit for $497. “Extraordinary growth on Level 7,” the plan says, “2,187 people x $20 = A Lot of Money.”

Allegations that Trump's "customized" dietary supplement, The Trump Network's signature product, made illegal health claims based on junk science dogged the endeavor from the onset. And in 2012, after Trump's licensing contract ended, the assets of The Trump Network were sold off for one million dollars, leaving much of the damage Trump left in his wake to remain years later.

Eileen Kelley, a retired college professor in Florida explained to CBS News that she and her husband, George, lost more than $10,000 and that she has delayed her retirement to pay off the debt from the Trump Network.

"I was sold on the product and the message and the testimonials -- and then of course Donald Trump coming on," Eileen said. "They were selling hope there to a lot of people in the middle of a recession," her husband added.

"I hate to see people taken in like that, like we were. I mean we're educated people, it's almost embarrassing," Eileen admitted to CBS News.

For their investigation, CBS News contacted over 30 former sales reps for the Trump Network. At one point, Trump Network had 20,000 independent sales representatives:

Most said they believed in these products. But some told us when they look back at the fees they paid for conferences, trainings and products, they aren't sure they made any money at all. About half told us they still support Trump, but most said they were kept in the dark about looming problems in the company.

Watch the Kellys discuss their bad investment in Trump Networks, via CBS News: