We let the idiots take the wheel: Donald Trump, Fox News and how we let our democracy rot

Disgraceful state of politics is tied to collapse of education. Philistines are marching, swarming Trump rallies 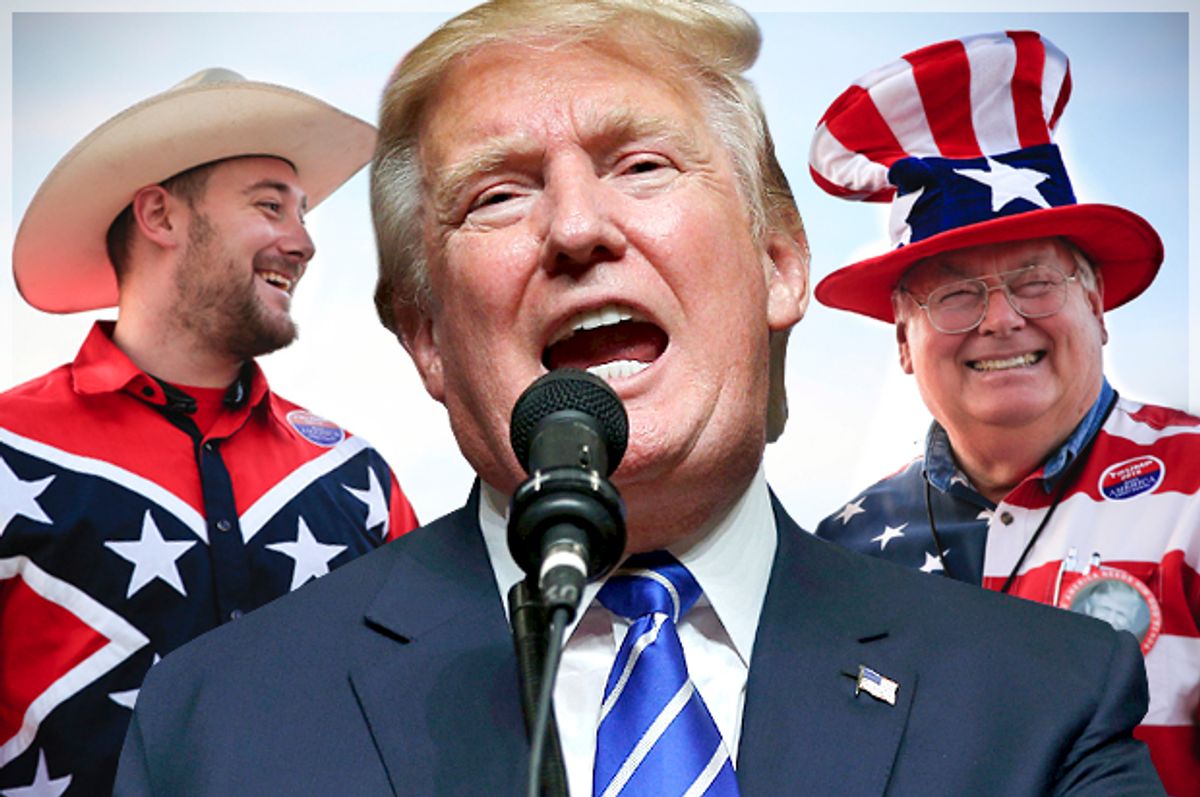 It is easy in a country dedicated to a megalomaniacal style of self-praise to grow tired of all the parades, hymns, and maudlin speeches about the wisdom of the “founding fathers.” Compounding the frustration is that many of their most valuable insights are now forbidden from entry into public school curriculums and cultural discourse. As the word “elitist” continues to undergo unfair demonization, no one dare utter that the framers of the United States Constitution were, themselves, elitists. They were terrified of what damage the public might inflict upon their invention. Benjamin Franklin even went so far as to predict that “the people shall become so corrupted as to need Despotic Government, being incapable of any other.”

Thomas Jefferson, a more democratic thinker, called information the “currency of democracy.” It would appear that large parts of America are all but bankrupt, suffering the consequences of a long liquidation at the hands of a sensationalistic media, but most of all, a broken education system.

In the current circus posing as a political campaign, commentators and candidates waste much of their time and energy frothing about insignificant issues and phony crises. Donald Trump, with all the eloquence and brilliance of a barroom belch, has introduced illegal immigration into the political debate, often claiming that it is one of the reasons that America is “going to hell.” Trump has failed to make a deal with reality, as it stubbornly refuses to submit to his paranoia. Illegal immigrants comprise a mere 3.5 percent of the American population, and from 2009 to 2014, more Mexicans left the United States than entered it. If trends continue, Trump’s “big, beautiful wall” will keep more Mexicans in the country than it keeps out.

Meanwhile, the cowardly obsession surrounding “Islamic terrorism” continues to play out like a scene of absurdist theater. Tragedies and atrocities, like recent bombings in Brussels and Pakistan, demand sympathy for mourners and vigilance toward the perpetrators, but standard methods of statistical evaluation demonstrate that an American has a one in 4 million chance of dying in a terrorist attack. The average American is more likely to drown in the bathtub.

Threatening the American public with greater severity than both ISIS and bathtub death is the disgraceful and disastrous condition of the public school system. Neither the Democrats nor Republicans running for president spend hardly any time discussing educational policy, but the longer that they ignore the real problem facing American society, the likelier they are to welcome the continual catastrophe of functional illiteracy, economic inequality and cultural decay into everyday American life.

Former Secretary of State Condoleeza Rice, far from a radical, co-chaired a task force on education reform in 2010, and in her scathing conclusion, labeled the decline of public schools so calamitous that it constitutes a “long term national security threat.”

In a more recent speech at Stanford University, where Rice is now a professor, she stated truths so obvious they would need amplification only in a country routinely neglectful of its educational system: “Failing schools undermine economic growth, social cohesion, and the ability to fill positions in institutions vital to national security.”

Rice, breaking away from the anti-intellectual imbecility of her political party, also lamented that great cultures are known for their “architecture and art,” but that America no longer cultivates widespread appreciation for creativity and ingenuity.

An advanced degree in sociology is not mandatory for finding evidence confirming Rice’s bleak forecast of America’s ignorant future. Two-thirds of Americans cannot name a single Supreme Court justice, and half are incapable of identifying all three branches of government. Forty-two percent of the public does not believe in evolutionary biology, while 24 percent believe that the sun orbits the earth.

Nearly a quarter of Americans read below the fifth-grade level, which helps to explain why only 29 percent read a newspaper, and why 24 percent of Americans do not read even one book a year.

To divorce the abysmal state of education from the downward turn of American politics straight into the sewer is to deny the connection between drinking battery acid and vomiting.

The philistines and modern-day know-nothings are on the march, and they all seem to show up at the Trump rally. In a recent essay, when I pointed out that Trump’s supporters are delusional to blame Mexicans and Muslims for their problems, and that when searching for suspects responsible for their hardships, they would have more luck with a mirror, many liberals condemned me as a “snobbish” and “heartless.” While the former is possibly true, the latter is not. Compassion does not necessitate lying to people in order to coddle and comfort them in their own self-destructive behavior.

Studies showing that Trump’s supporters are the lowest educated of all constituencies, and that they are highly susceptible to laughable conspiracy theories and inane analyses of complex phenomena go together like litter and cat piss. The New York Times revealed that Trump has an unusually large number of high school dropouts among his voters, and polls also demonstrate that 61 percent of Trump supporters do not believe that Barack Obama was born in the United States. Trump voters, given their low income status, would benefit most from the Affordable Care Act, and its Medicaid extension, but in their voting habits and political preferences, they prioritize tribalistic expression of opposition to the Kenyan Muslim over access to medicine.

This is not an accident or a coincidence, and it is not because of those magic words that commentators use to explain everything they would rather not acknowledge – “the economy.”

Recognition of the rampant ignorance among Trump supporters shatters an odd, American taboo against direct criticism of voters. According to the stock script, Donald Trump is a racist, buffoon and demagogue. If all of those accusations are accurate – and they appear more so every single day – what does that make his voters? If Trump had not won a state, and was currently polling in the single digits, no one would care enough about his candidacy to attack him. It is only because a significant swath of citizens are empowering Trump that he has become the Republican frontrunner, and that he is likely to win the nomination of his party.

All indication is that Hillary Clinton will crush him in the general election, offering the hope that the Trump cohort of antisocial and anti-intellectual fanatics is most at home on the margins of politics, right where they belong.

Americans still committed to the odd notion of responsible citizenship should treat Trump fever as they would an arthritic ankle. It is not life-threatening, but at the same time, it is nothing to ignore.

The swollen joints of the American body politic are symptomatic of the malignancy rotting out its public education system. A recent decline in the dropout rate is good news, but many high school graduates leave their commencement ceremonies, diploma in hand and nothing in mind.

According to the National Center for Public Policy and Higher Education, nearly 60 percent of first-year college students have to take remedial courses in mathematics or English. Clearly, if a high school graduate is earning acceptance into a college, he is not the worst of the worst, yet it is likely he does not read, write, or perform arithmetic at the level of a high school graduate.

Since the closing American mind often prefers to understand important ideas in terms of war, imagine an army heading into battle with over half of its soldiers unable to shoot a gun or operate military machinery, and you will have a picture of America marching into the future.

The good liberal reaction to ignorance is not defense of it in the name of misplaced social solidarity and misapplied class consciousness. It is disapproval, and commitment to prevent ignorance in future generations. It is a return to the liberal agenda of public school excellence, home tutoring and literacy programs, adult education assistance, and affordable colleges.

Intellectual rigor, higher education access, and old-fashioned learning will stop the rise of future authoritarian buffoons, not pathetic excuse-making for the voters who, in the words of Arthur Miller, are “aching for an Ayatollah.”

When asked what form of government the founders established at the Constitutional convention, Franklin, in keeping with his dark forecast, shot back, “A Republic – if you can keep it.”

Education is what will allow us to keep it.