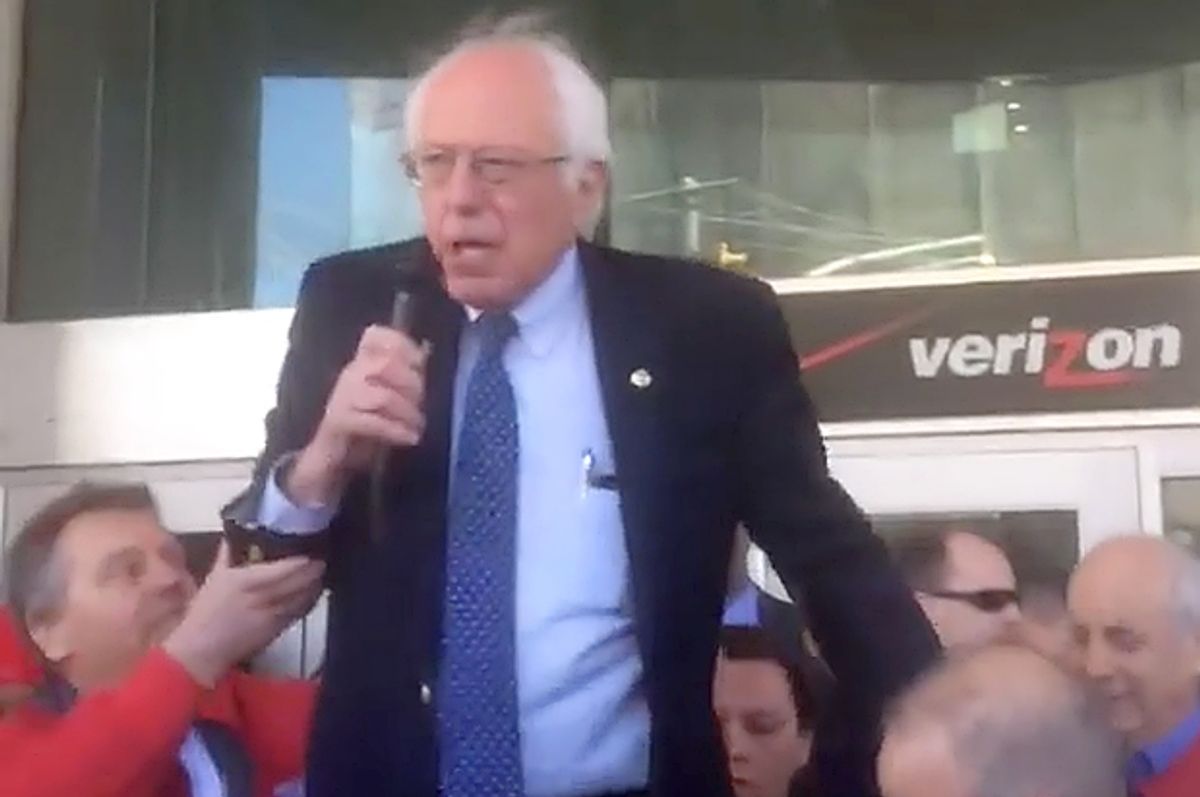 Bernie Sanders speaking in support of the Verizon strike at the picket line in New York City on Wednesday, April 13 (Working Families Party/Facebook)
--

In an almost unanimous vote, Transport Workers Union Local 100, which represents 42,000 workers, threw its weight behind the Vermont senator.

Later on the same day, Sanders spoke in support of Verizon workers on strike.

The Working Families Party posted to Facebook a video of Sanders' speech at the picket line (which begins at around 22:00).

"We're fighting a vicious corporation, but we've got a champion that's fighting for us," a strike leader said, introducing the presidential candidate. "Let's hear it for Bernie Sanders!"

The crowd chanted "Bernie, Bernie!" as the self-described democratic socialist stood up on the podium.

Sanders appeared to be holding notes, but instead spoke impromptu. A transcript of his speech follows:

"Brothers and sisters. Thank you for your courage and standing up for justice against corporate greed.

Verizon is one of the largest, most profitable corporations in this country, but they refuse to sit down and negotiate a fair contract.

They want to take away the health benefits that you have earned.

They want to outsource decent-paying jobs.

They want to give their CEO $20 million a year.

In other words, this is just another major American corporation trying to destroy the lives of working Americans.

Today, you are standing up not just for justice for Verizon workers; you're standing up for millions of Americans who don't have a union.

The working class of this country deserves to earn decent wages, decent benefits, and not see their jobs go to low-wage countries.

But you have chosen to stand up for dignity, for justice, and to take on an enormously powerful special interest.

So on behalf of every worker in America, those facing the same kind of pressure, thank you for what you are doing. We're gonna win this thing!"

Enthusiastic chants of "Bernie, Bernie!" and "We will win!" exploded as Sanders stepped down. He walked off the podium and briefly posed with people with "Labor for Bernie" shirts on.

This is not the first time Sanders has stood with Verizon workers on strike.

In October, Sanders again joined in solidarity with Verizon workers on the picket line. "It’s hard to see any of the other presidential candidates doing this," the Huffington Post reported at the time.

Sanders' competitor, Wall Street-backed former Secretary of State Hillary Clinton, certainly did not do the same, although she offered tepid support for the Verizon workers, writing in a statement, "Verizon should come back to the bargaining table with a fair offer for their workers."

The Clintons are not exactly known for being pro-labor. The "New Democrat" movement they heelped create embraced neoliberal economics and moved away from a labor mass base.

Labor activists have in fact pointed out that, on their first date, Bill and Hillary crossed a picket line.

Bernie has serious momentum going into New York, where the primary will be held on April 19. Polls show Clinton leading in popularity, but Sanders has rapidly closed the gap.

Sanders has insisted that, if he wins New York, he will win the presidency. The number show he could be right.