Of course Paul Ryan isn't running for president: 2016 will be a disaster for Republicans no matter who's the nominee

All the talk of a Ryan nomination from the convention floor missed one big point: He's not dumb enough to try it 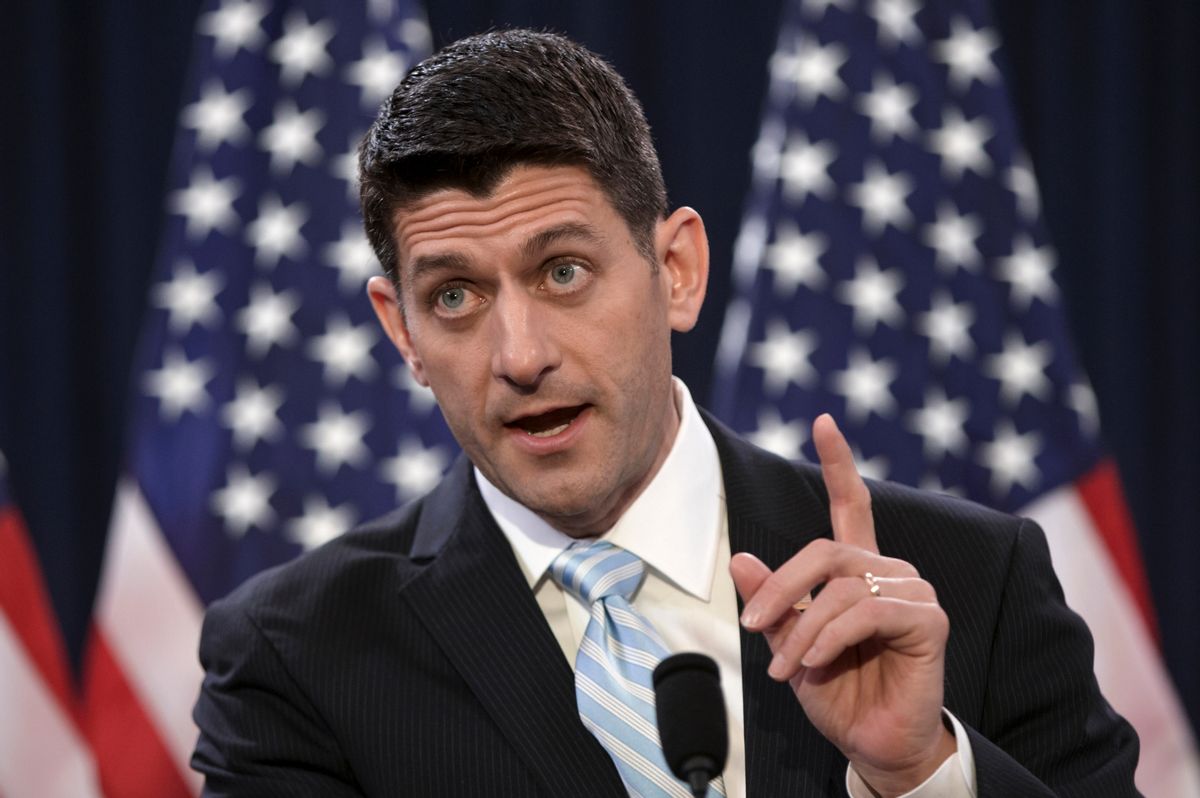 FILE - In this March 23, 2016 file photo, House Speaker Paul Ryan of Wis. speaks on Capitol Hill in Washington. Wisconsin's "Cheesehead Revolution" was ushered in by a trio of Republicans, Walker, Reince Priebus and Scott Walker, looking to inject the party with their own youthful, aggressive brand of conservatism while positioning the party for success in the 2016 presidential election. Then came Donald Trump. (AP Photo/) (AP/J. Scott Applewhite, File)
--

We've been noting for some time the fact that America's sweetheart, Paul Ryan, was unlikely to be the establishment savior everyone wanted him to be. It's understandable that people attached to the various institutions associated with the Republican Party would be desperate for white knight to ride in and rescue the party from what is shaping up to be a nuclear meltdown in Cleveland this summer, but it's not going to happen.Yesterday, Ryan crushed their forlorn hopes in no uncertain terms:

"We have too much work to do in the House to allow this speculation to swirl or have my motivations questioned. Let me be clear: I do not want, nor will I accept, the Republican nomination.So let me speak directly to the delegates on this: If no candidate has a majority on the first ballot, I believe you should only choose a person who actually participated in the primary. Count me out. I simply believe that if you want to be the nominee — to be the president — you should actually run for it. I chose not to. Therefore, I should not be considered. Period."

That's about as close to Shermanesque as you can get without burning down Atlanta.

When Mitt Romney made his famous speech denouncing Trump, there was a little boomlet in the media that had everyone thinking he might be the elder statesman who could step into the breach and save the party from itself. His gambit to stop Trump by any means necessary was seen as a self-serving way of getting himself back into the game. Unfortunately, polling shows that he's loathed by Republican voters who are in no mood for establishment losers sweeping in and telling them what to do. His favorability is worse than Trump's: 23 percent favorable, 65 percent unfavorable.

Romney's running mate Ryan sees this and is too smart to jump into this 2016 circus sideshow, no matter how much the party wants him to do it. As Steve Kornacki astutely observed on MSNBC yesterday:

I think you can make a pretty strong case that the delegates who will get the ultimate say over everything at this convention are going to be anti-establishment delegates. You talk about Paul Ryan you talk about any other candidate who might come into the picture if this thing looks like chaos, you don't have a lot of consensus between the Trump people and the Cruz people right now on much but you put a name like that out there I think you would very well have consensus not to go down that road. This would not be a convention that would turn to somebody from the establishment.

Nonetheless, Ryan's the go-to dreamboat to whom they turn these days whenever the masses start to revolt. This is likely because the press labors under the illusion that he's tremendously popular with the base and that gives the establishment hope for positive coverage and a shot at winning. During the long embarrassing chase for a speaker to replace Boehner after the entire House caucus nearly imploded (an early harbinger of what's to come?) the media treated him as more of a religious figure than a politician and it finally forced the Freedom Caucus into reluctantly accepting his leadership. Lucky for him, the presidential race overshadowed what is seen by conservative movement stalwarts as Ryan's immediate sell-out -- the passage of the Omnibus budget bill which funded the government through the end of this year.

Here's Laura Ingraham's assessment of his leadership after that passed:

Now we know why they were so desperate to get House Speaker Paul Ryan, R-Wis., in there. He would carry forward the Boehner-Pelosi deal to increase spending by $66 billion and demand GOP fealty. Remember all our friends at National Review who urged the party to come together to support Ryan as speaker? Did they believe he’d greenlight the full funding of Planned Parenthood, executive amnesty, sanctuary cities and refugee resettlement? Did other pro-Ryan conservatives expect this? How is this conservative?

Speaker Ryan now has to be regarded as a declared enemy of the Base.

This was the front page of the Drudge Report last December 17th: 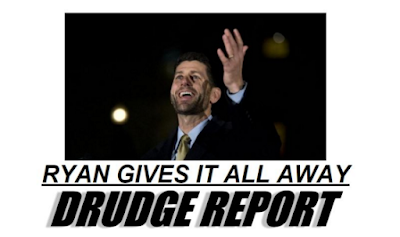 The savior's alleged capitulation on the omnibus bill is only one of the apostasies for which he's been condemned. He is also on record being for comprehensive immigration reform and for the Trans Pacific Partnership trade deal.  He has said publicly that we must leave the “gates open to the people who are coming in pursuit of their version of the American dream.” America, Ryan said, “is more than our borders.” Imagine the reaction of Trump and Cruz delegates at the convention to hearing those words. You can bet that talk radio and surrogates would be blaring it all over Cleveland and Roger Stone would be slipping little oppo folders under their hotel doors. After this campaign, Ryan might as well have been caught spitting on Ronald Reagan's grave.

The only member of the establishment who seems to know this, however, is Ryan himself. He's actually been making these Shermanesque statements for months, ever since the terrifying prospect of a Trump or Cruz nomination began to sink in and the party poohbahs and the press began to game out various scenarios to deny the inevitable embarrassment of either one of them at the top of the ticket. But everyone seemed to think he was playing coy. (And considering his Hamlet act over the speakership last fall, it's not completely surprising.) People also noticed him doing some things that lead one to think he's reaching for higher office, such as producing some glossy Speaker videos promoting his agenda and giving inspirational speeches in formal settings. It turns out that the video productions were a holdover from Boehner's reign and the speeches are part of something Ryan promised to do when he took the job. He meant it when he said he didn't want to be president.

It's a testament to his star power that even with his Sherman statement yesterday member of the both the left and the right simply refused to accept it:

Rick Lazio on MSNBC: Paul Ryan is the consensus alternative... I believe he really does not want to be a candidate. And it surely complicates his role as chairman of the convention and as speaker of the house. So I think he really does not want to do it . But in a setting where you have almost a crisis and a decision that has to be made I'm not sure they wouldn't revisit that issue.

The dream will never die.

None of this is to say that Ryan isn't running for president. He almost certainly is saving himself for a future election. He claims to be putting together a policy agenda for the party and that's probably the truth. The party will be deeply damaged by this campaign regardless of who gets the nomination and out of the ashes once again the establishment will turn its lonely eyes to Paul Ryan. When the time comes, he will be ready.